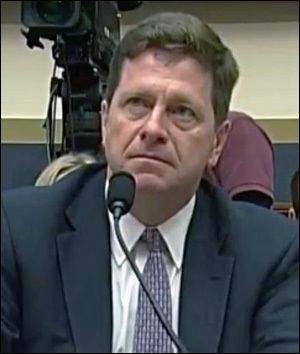 That announcement came from the SEC on Friday. On Monday of the previous week, Clayton delivered a speech on improving the Wall Street culture at a full day symposium held by the New York Fed  — an institution whose culture has also been deeply compromised by Wall Street. (See Is the New York Fed Too Deeply Conflicted to Regulate Wall Street?)

The low point of Clayton’s speech came in the opening minutes when he lavished praise on the scandal-laced tenure of the President of the New York Fed, Bill Dudley, who was appointed to that position on January 27, 2009 at the height of the financial crisis. Dudley has served as the head of the New York Fed until Friday, June 15, when he retired. Dudley previously worked as a partner and Managing Director at Goldman Sachs for two decades, including ten years as its U.S. Chief Economist. Clayton said this about Dudley:

“I want to extend my congratulations to Bill Dudley on a very successful term. You are now a member of the long line of former leaders and perpetual culture carriers at the New York Fed. The respect for the New York Fed, among national and international regulators and, importantly, market participants of all stripes, is remarkable, but clearly well deserved.”

If ever there was a legitimate reason to scream “fake news,” this was it. Dudley’s coddling of the big Wall Street banks was such an outrage that one of his own bank examiners, Carmen Segarra, (a woman with a law degree) was motivated to visit a spy store, buy a tiny tape recorder, and tape hours of conversations showing how the Fed cozied up to the big banks. Segarra said that she was fired by the New York Fed for refusing to change a negative bank examination of Goldman Sachs.

That scandal played out for months in the media in 2014 after ProPublica in conjunction with the radio program This American Life released some of the tape recordings that Segarra had made.

In November of 2014, Dudley had the distinction of being the first President of the New York Fed to ever be publicly shamed at a Senate Hearing. The Senate Subcommittee on Financial Institutions and Consumer Protection, then chaired by Sherrod Brown, called attention to Dudley’s serial lapses of judgement and failures as a regulator. (See U.S. Senate Tries Public Shaming of New York Fed President Dudley.) Following this humiliation, Dudley embarked on a road show of speeches on changing the culture of Wall Street while doing nothing meaningful to actually change the culture of Wall Street. Clayton now seems to be picking up where Dudley left off with his “culture” road show.

In Clayton’s speech on June 13, he told the audience this:

“Let’s take as given that both the firm’s management and the regulator want the firm to have ‘good’ culture, one, for example, that is consistent with long term shareholder, employee, customer and societal interests as well as law and regulation. In other words, we’re all trying to row the same boat in the same direction.”

Clayton is in the perfect position to know that it’s nonsense to suggest that the management of the serially charged mega banks on Wall Street want a good culture. Clayton was nominated to become SEC Chair while he was a law partner of Sullivan & Cromwell. Over the prior three years, he had represented many of the serially charged Wall Street banks, including Citigroup, JPMorgan, Morgan Stanley, and Bank of America Merrill Lynch. Clayton had also been outside counsel to Goldman Sachs for years.

The CEOs and executives of those banks get rich from their stock options, which are lavished on them despite the serial charges of wrongdoing against their banks, leading to a culture of “if you ain’t cheating you ain’t trying,” as was memorialized in the 2015 charges against the foreign exchange rigging cartel on Wall Street.

Clayton also preposterously said this in his speech on culture:

“While there is great importance in setting a positive ‘tone at the top,’ an organization’s culture is, in large part, defined by the countless daily actions of its people. Culture is not just what is said by management to the work force, but what is done, i.e., what actions are taken, day in and day out throughout the organization, with colleagues, customers, suppliers and regulators.”

The SEC and the U.S. Justice Department have settled crime after crime after crime with JPMorgan Chase while leaving Jamie Dimon as both Chairman of the Board and CEO at JPMorgan Chase. In the annals of U.S. banking, no major institution has ever survived pleading guilty to three felony counts, much less left their Chairman and CEO in place after those three felony counts. And yet, that’s exactly what the U.S. Justice Department and SEC have allowed to occur in the case of Jamie Dimon.

Is that setting the right “tone at the top”? The crime spree at JPMorgan Chase, where the bank facilitated the theft of tens of billions of dollars from investors and paid back just a fraction of its haul, has made Jamie Dimon a billionaire from his stock option grants that are annually rubber-stamped by his lavishly paid Board of Directors.

The only thing that is going to meaningfully change the culture on Wall Street is for the public to elect members of Congress who will legislate an end to the revolving door between Wall Street and Federal regulators; who will terminate Wall Street’s crony private justice system called mandatory arbitration; who will give the SEC criminal prosecution powers (it currently has only civil powers); and who will dramatically increase the budget and staffing at the SEC. Currently, the SEC has only 4500 employees overseeing 26,000 registered financial firms and their 1 million employees. The SEC’s tiny enforcement staff consists of approximately 1400 employees, which represents 0.001 percent of the employees at the firms it oversees.

The SEC is an agency that has been structurally designed to fail in its mission by the titans of Wall Street and their legions of lobbyists and trade associations.