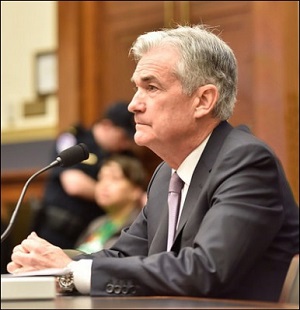 The U.S. Federal Reserve, the country’s central bank that is supposed to serve the interests of the nation, gave the largest Wall Street banks a big, irresponsible gift yesterday. The big banks will now be able to spend approximately $170 billion buying back their own stock and paying out increased dividends to shareholders instead of doing what banks are supposed to do: make loans to worthy businesses to stimulate the U.S. economy. But don’t expect to find that critical news on the front page of your local newspaper.

The front pages of newspapers across America proved once again today that chaos in the running of the Federal government is dominating news reporting while it continues to relegate to the back pages the alarming risks that are growing again on Wall Street. This raises the question as to whether the chaos is a bug or a feature of this presidency. Let’s not forget that numerous Goldman Sachs veterans have been installed in this administration while Federal regulators come from the ranks of Wall Street or its lawyers.

President Donald Trump’s ability to pick another U.S. Supreme Court Justice, his upcoming summit with Russian President Vladimir Putin in the midst of a Special Counsel criminal probe of the Trump campaign’s ties to Russian involvement in the 2016 U.S. election, and the babies and toddlers that remain separated from their immigrant parents under Trump’s recent, illegal, separation of families immigration policy fill today’s front pages.

According to the Federal Reserve’s announcement yesterday, under its stress test known as the Comprehensive Capital Analysis and Review (CCAR), the biggest Wall Street banks will be able to dramatically expand a technique of manipulating their own share price through share buybacks and richer dividend payouts.

The news was announced by the Fed at 4:30 p.m. yesterday and the banking behemoths could barely contain themselves before publicly boasting of their big buyback and dividend plans. Citigroup announced it would spend $22 billion in buybacks and dividend boosts over the next year, an increase of $3.1 billion from a year ago. Citigroup said $17.6 billion of that $22 billion would go to buybacks of its stock.

JPMorgan Chase wasted no time in announcing it would boost its quarterly dividend by 43 percent while increasing its share buybacks over the next year to as much as $20.7 billion from an estimated $19.4 billion for the past 12 months. According to the Fed’s announcement, JPMorgan had originally asked to spend more than that but was turned down by the Fed.

Goldman Sachs and Morgan Stanley were also turned down by the Fed for their requested boosts in capital spending and forced to stay within the limits imposed previously. CNBC reported that Morgan Stanley plans to “raise its quarterly dividend to 30 cents a share from 25 cents and buy back $4.7 billion of stock, consistent with the $6.8 billion in capital it returned over the last year.” Goldman Sachs, according to CNBC, will “raise its dividend by 5 cents a share to 85 cents and buy back $5 billion of shares, not going over $6.3 billion.”

The Fed announcement also indicated that it had “objected to the capital plan of DB USA Corporation [Deutsche Bank USA] on qualitative grounds based on material weaknesses in capital planning. The Board of Governors issued a conditional non-objection to the capital plan of State Street Corporation on quantitative grounds and has required the firm to take certain steps regarding the management and analysis of its counterparty exposures under stress.”

Deutsche Bank USA’s parent corporation, Deutsche Bank of Germany, trades on the New York Stock Exchange. Since January it has lost 50 percent of its market capitalization and closed yesterday at $10.47, just 11 cents from its all-time low. The problem for the Fed and Wall Street and the American people is that Deutsche Bank is bleeding equity capital at the same time that it retains serious counterparty exposure to Wall Street banks. In June 2016 the International Monetary Fund (IMF) issued a report on Deutsche Bank, concluding that if it blew up, the spillover effects would not be contained to Germany. A chart accompanying the report (see below) showed outward spillover impacts to the largest Wall Street banks: JPMorgan Chase, Citigroup, Goldman Sachs, Bank of America, Morgan Stanley and others.

The Fed’s CCAR announcement did own up to one highly important fact. Risk is highly concentrated on Wall Street. The Fed said that the same six banks that it found necessary to subject to stress testing for “global market shock” are the same six banks it found it necessary to test for potential counterparty default. Those banks are, in alphabetical order: Bank of America, Citigroup, Goldman Sachs, JPMorgan Chase, Morgan Stanley, and Wells Fargo. Two additional banks made it into the counterparty default test: Bank of New York Mellon Corporation and State Street Corporation.

Another looming problem for maintaining financial stability on Wall Street under the regimen of Federal Reserve stress testing is the very real possibility that the Fed’s stress testing model is intentionally bogus and just a placebo to kick the can down the road, rather than endure the wrath of Wall Street’s legions of lawyers and lobbyists.

In 2016, researchers at the U.S. Treasury’s Office of Financial Research (OFR) – an agency created under the 2010 Dodd-Frank financial reform legislation to specifically advise the Fed and other Federal regulators on systemic financial risks building up on Wall Street – issued a report indicating that the Fed’s stress test has a faulty design. The report noted that the Fed is measuring counterparty risk on a bank by bank basis.  The real problem, according to the report, is not what would happen if the largest counterparty to a specific bank failed but what would happen if that counterparty happened to be the counterparty to other systemically important Wall Street banks.

To put it another way, would any of the big Wall Street banks have passed this stress test if the Fed had measured all of their counterparty risks to Deutsche Bank or to MetLife or Prudential Insurance or to some other counterparty to their trillions of dollars in derivatives? OFR’s report explained it as follows:

“A BHC [bank holding company] may be able to manage the failure of its largest counterparty when other BHCs do not concurrently realize losses from the same counterparty’s failure. However, when a shared counterparty fails, banks may experience additional stress. The financial system is much more concentrated to (and firms’ risk management is less prepared for) the failure of the system’s largest counterparty. Thus, the impact of a material counterparty’s failure could affect the core banking system in a manner that CCAR may not fully capture.” [Italic emphasis added.]

A masterful analysis of the Fed’s gross dereliction of its duties was put on bookshelves this May 1. Wall Street veteran Nomi Prins writes in her new book, Collusion: How Central Bankers Rigged the World, that “The Fed absolved itself of all responsibility for financial stability in the big bank landscape in June 2017 when it allowed thirty-four of the largest Wall Street banks, including the Big Six, to pass its stress tests. In turn, the banks took this opportunity to buy more of their own shares, elevating their stock prices rather than expanding their loan services for small businesses and Main Street customers.” Prins writes that these billions in buybacks meant that the Fed was “greenlighting legal manipulation of the stock market.”

Tragically, the greenlighting of this manipulation continues today — in ever larger terms.