Here’s What Else Isn’t Normal: The Stock Market 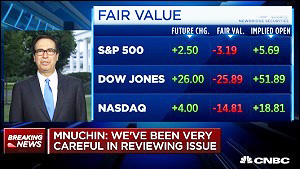 U.S. Treasury Secretary Steve Mnuchin on CNBC before the Market Opened on June 27, 2018

There’s an old maxim on Wall Street that says “the trend is your friend.” It’s sort of like Newton’s first law of motion, frequently expressed as “An object at rest stays at rest and an object in motion stays in motion with the same speed and in the same direction unless acted upon by an unbalanced force.” Today, there is an unusually “unbalanced” factor weighing on everything we previously took for granted about our democracy and our American values. Does it also have its fingers in the U.S. stock market?

In a kind of in your face “we can move the markets” boast, CNBC posted a split screen showing Mnuchin on the left and a chart on the right showing the futures moving into positive territory as he spoke. (For our background coverage on the role Andrew Ross Sorkin, who doubles as a columnist at the New York Times, has played in providing alternative “facts” about Wall Street, see Readers Pummel New York Times Writer Over His Big Bank Stance.)

Then something especially interesting happened. Some invisible hand goosed the market with some serious money. Eric Hunsader, founder of Nanex, a rich streaming feed of market data, Tweeted that 18 minutes after the market opened for trading there had been 5000 S&P futures contracts purchased in three buys within a 50 second span followed by 2500 more contracts in two additional buys.

The market was off to the races. The Dow soared 285.91 points in morning trade. But that trend wasn’t your friend either. A little before 11 a.m., that trend reversed on a dime and the market headed down, eventually closing with a loss of 165.52. All the kings horses and all the kings men couldn’t put this market back in an uptrend.

This isn’t the first time that the Trump administration has messed with the market. The first Friday of every new month the Bureau of Labor Statistics releases the nonfarm payroll report showing how many new jobs were created in the prior month. That information is a big market mover and it is not supposed to be leaked before its official release at 8:30 a.m.

But before the jobs numbers were released on June 1, President Trump tweeted this: “Looking forward to seeing the employment numbers at 8:30 this morning.” This sent the signal to traders that the numbers would be better than expected. Indeed, the report was stronger than anticipated with 223,000 new jobs created the prior month.

The ability of the White House to talk up the market on a sustainable basis is facing serious headwinds. At the close of trading last Thursday, the Dow had fallen eight days in a row before closing in positive territory on Friday. To technical watchers, that’s a trend. On Monday of this week, the Dow broke below its 200-day moving average. That’s also a bad technical omen.