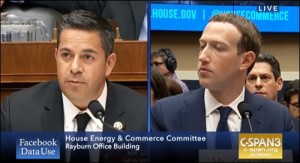 Facebook wants Congress, shareholders and Wall Street analysts to think of it as a sexy, high-growth-potential technology company, not a media company, but after 10 hours of Congressional probing this week, Facebook has been revealed to be a media company that is simply using advanced technology and deceptive practices to gain an unfair advertising advantage over other media companies. (Another reason Facebook does not want to admit to being a media company is that it would then have to take responsibility for the fake news and propaganda it is spreading through Russian bots and trolls of every stripe.)

As Facebook CEO Mark Zuckerberg conceded this week in the Congressional hearings, Facebook’s business model revolves around the company’s ability to provide advertisers with granular data on its users so that advertisers can more effectively target them for a specific product or service. But Zuckerberg kept his trade secrets on that data collection process close to his vest.

Time and again during the hearings, Zuckerberg was asked how many data points Facebook collected on its users. The 33-year old wunderkind who has been at the helm of this company since he cooked it up in his college dorm room at age 19, repeatedly told skeptical members of Congress that he did not know. And yet, it is this massive data point collection that provides Facebook with the secret sauce that generated $40.65 billion in revenue for Facebook in 2017.

“And they store all the applications you’ve ever had connected to your Facebook account, so they can guess I’m interested in politics and web and graphic design, that I was single between X and Y period with the installation of Tinder, and I got a HTC phone in November.”

But that’s just the tip of the iceberg according to ProPublica. In a 2016 investigation, its reporters found that Facebook wasn’t sharing with its users the detailed dossiers about them that it was buying from commercial data brokers. Quoting Jeffrey Chester, the Executive Director of the Center for Digital Democracy, the article noted that “Facebook is bundling a dozen different data companies to target an individual customer, and an individual should have access to that bundle as well.”

In yesterday’s House hearing, Congressman Ben Ray Lujan of New Mexico asked Zuckerberg how many data points, on average, it had on each Facebook user. Zuckerberg said “I do not know off the top of my head,” an answer he gave frequently during the two days of hearings. Lujan said that the “average for non Facebook platforms is 1500” data points but that it has been reported “that Facebook has as many as 29,000 data points for an average Facebook user.” That’s the secret sauce that Facebook is selling to advertisers.

The 29,000 data point figure came from the ProPublica investigation where it reported that it had “downloaded a list of 29,000 categories that the site provides to ad buyers. Nearly 600 of the categories were described as being provided by third-party data brokers.”

Congressman Lujan then raised one of the most squirm-worthy issues for Zuckerberg: its harvesting of data on non-Facebook users. The exchange went like this:

LUJAN: Facebook has detailed profiles on people who have never signed up for Facebook, yes or no?

ZUCKERBERG: Congressman, in general we collect data from people who have not signed up for Facebook for security purposes to prevent the kind of scraping that you were just referring to.

LUJAN: So these are called shadow profiles? Is that what they’ve been referred to by some?

ZUCKERBERG: Congressman … I’m not familiar with that.

It was at this point that careful viewers of the two days of hearings might have wanted to throw rotten fruit at the Senate and House Committee chairs who had negligently failed to put Zuckerberg under oath. Considering that multiple members of Congress believe that Facebook has violated its 2011 consent decree with the Federal Trade Commission and is merely rolling out an apology tour before it returns to its serial abuses of privacy rights in the United States and elsewhere, putting the head honcho of the company under oath would seem like a no-brainer.

Last November Gizmodo’s Kashmir Hill filled in a lot of the blanks on the shadow profiles that Facebook is collecting on non Facebook users. Hill wrote that “Behind the Facebook profile you’ve built for yourself is another one, a shadow profile, built from the inboxes and smartphones of other Facebook users. Contact information you’ve never given the network gets associated with your account, making it easier for Facebook to more completely map your social connections.”

“A man who years ago donated sperm to a couple, secretly, so they could have a child—only to have Facebook recommend the child as a person he should know. He still knows the couple but is not friends with them on Facebook.

“A social worker whose client called her by her nickname on their second visit, because she’d shown up in his People You May Know, despite their not having exchanged contact information.

“A woman whose father left her family when she was six years old—and saw his then-mistress suggested to her as a Facebook friend 40 years later.

“An attorney who wrote: ‘I deleted Facebook after it recommended as PYMK [People You May Know] a man who was defense counsel on one of my cases. We had only communicated through my work email, which is not connected to my Facebook, which convinced me Facebook was scanning my work email.”

Now consider another aspect of what Facebook is doing. It is paying nothing to its more than 2 billion users who are pumping out content on its platform 24/7. And it hires no editors to fix the grammar or fact check the content of the average user. Imagine what the profits would be at other U.S. media companies if their writers worked for free, they didn’t have to hire editors and they could throw fact-checking of content to the wind.

What impact might Facebook’s business model be having on other U.S. media companies who can’t afford a geek force to engage in surveillance of users all over the Internet and compile 29,000 data points to seduce advertisers? Take a look at this annual revenue chart from the New York Times. Its annual revenues have shrunk from $3.27 billion in 2006 to $1.68 billion last year.

Last July, Reuters called Google and Facebook an ad duopoly, writing: “This year, the Big Two in internet advertising are expected to take half of all revenue worldwide, and more than 60 percent in the United States, according to research firm eMarketer. In the U.S. market, no other digital ad platform has market share above 5 percent.”