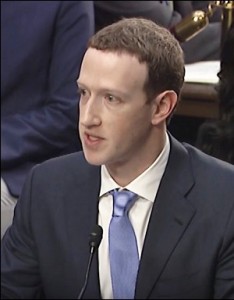 Mark Zuckerberg Appears Before a Joint Senate Committee on April 10, 2018

As Facebook’s CEO Mark Zuckerberg fingered his cheat sheet of canned answers to a barrage of questions from Senators yesterday on how Facebook had allowed a Trump-backed political operation to harvest personal data from 87 million of its users, Zuckerberg attempted to channel motherhood, apple pie, dorm room entrepreneurism and an altruistic desire to connect people around the world in one harmonious melding of human spirit.

Unfortunately, the facts just kept getting in the way. There was the questioning from Senator Richard Blumenthal pointing out that Facebook had been caught red-handed in 2011 by the Federal Trade Commission in egregious abuses of its users’ personal data. Blumenthal said current activities at Facebook showed that Facebook was in “violation of the FTC consent decree.”

One of the most eyebrow-raising moments came when Senator Maria Cantwell opened her line of questioning by invoking the name “Palantir,” a data mining company which received early funding from the CIA and whose co-founder, billionaire Peter Thiel, has sat on the Facebook Board of Directors since April 2005. Thiel contributed over $1 million to the Trump campaign and chipped in $100,000 for his inauguration according to the Center for Responsive Politics.

The exchange went like this. (See the full exchange in the video below.)

CANTWELL: Thank you Mr. Chairman. Welcome Mr. Zuckerberg. Do you know who Palantir is?

CANTWELL: Some people have referred to them as Stanford Analytica. Do you agree?

ZUCKERBERG: Senator, I have not heard that.

CANTWELL: Ok. Do you think Palantir taught Cambridge Analytica, press reports are saying, how to do these tactics?

CANTWELL: Do you think that Palantir has ever scraped data from Facebook?

ZUCKERBERG: Senator, I’m not aware of that.

CANTWELL: Ok. Do you think that during the 2016 campaign as Cambridge Analytica was providing support to the Trump campaign under Project Alamo, were there any Facebook people involved in that sharing of technique and information?

ZUCKERBERG: Senator, we provided support to the Trump campaign similar to what we provide to any advertiser or campaign who asks for it.

Cantwell was likely referring to the New York Times article that ran on March 27 of this year. The article quoted the Cambridge Analytica whistleblower, Christopher Wylie, who testified before the British Parliament that Palantir employees had helped to engineer the Cambridge data gathering models. Wylie testified: “There were Palantir staff who would come into the [Cambridge] office and work on the data. And we would go and meet with Palantir staff at Palantir.”

In 2015, TechCrunch reported that “As of 2013, Palantir was used by at least 12 groups within the US Government including the CIA, DHS, NSA, FBI, the CDC, the Marine Corps, the Air Force, Special Operations Command, West Point, the Joint IED-defeat organization and Allies, the Recovery Accountability and Transparency Board and the National Center for Missing and Exploited Children.”

The Palantir website explains one aspect of what it does as follows:

“Palantir Intelligence integrates disparate data from disconnected data silos at massive scale for low-friction interaction with intelligence officers. Search through every shred of enterprise data at high speed, pull out significant intelligence, and perform intuitive, multi-dimensional analysis to reveal unseen patterns, connections, and trends. Enterprise data sources, unstructured cable traffic, structured identity data, email, telephone records, spreadsheets, network traffic and more can all be searched and analyzed without the need for a specialized query language. Intelligence officers can rapidly turn mountains of data into actionable insight by asking the questions they need answered, in a language they understand.”

“It is all-powerful, yet no one knows it even exists. Palantir does not have an office, it has a ‘SCIF’ on a back street in Palo Alto, California. SCIF stands for ‘sensitive compartmentalised information facility’. Palantir says its building ‘must be built to be resistant to attempts to access the information within. The network must be ‘airgapped’ from the public internet to prevent information leakage. ”

The Senate hearing at which Zuckerberg appeared was a joint session of the Senate Judiciary and Commerce committees. Zuckerberg wore a suit and tie rather than his standard attire – a t-shirt.