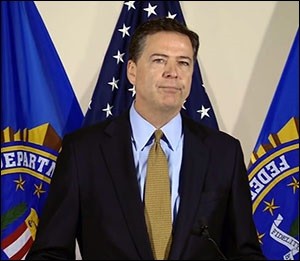 The Republican National Committee (RNC), the organization that provides leadership and funding for the official Republican Party of the United States, has put its reputation on the line along with every Republican that’s running for public office in November by setting up an official RNC website calling former FBI Director James Comey “Lyin’ Comey.”

It has been the longstanding position of President Donald Trump that Comey is a liar. Trump fired Comey in the midst of the FBI’s investigation into Russia’s involvement in the 2016 presidential election and has disparaged him ever since. Comey is highly respected by the rank and file of the FBI, the most esteemed law enforcement agency in the United States.

The RNC has apparently taken Trump’s personal loyalty pledge – the one Comey says he refused to take when asked by the President. But there’s no escape hatch for the rest of the Republican Party if Special Counsel Robert Mueller’s probe exposes the President as the serial liar, and potentially worse. (The Washington Post has already chronicled 2,001 lies the  President told in his first year in office.)

Last night the Washington Post reported that Cohen frequently tape recorded phone calls and maintained those recordings in a digital archive. The Post article raises the prospect that the FBI may have seized those recordings in their raids. The article also pointed out that attorney-client privilege would not apply to the tapes if the “conversation was conducted to further commission of a crime or fraud.” The same theory would hold true for any documents seized by the FBI.

The RNC website’s trashing of Comey comes as Comey’s new book, “A Higher Loyalty,” is set for official release next Tuesday. Its content has already been leaked to major media outlets. The RNC website contains one sentence which seems to drill down to its primary objective. It reads: “Comey may use his book tour to push the phony narrative that President Trump obstructed the Russia investigation.”

In fact, NBC reported last evening that obstruction is clearly being looked at by Mueller. The network reported:

“Three sources familiar with the investigation said the findings Mueller has collected on Trump’s attempts to obstruct justice include: His intent to fire former FBI Director James Comey; his role in the crafting of a misleading public statement on the nature of a June 2016 Trump Tower meeting between his son and Russians; Trump’s dangling of pardons before grand jury witnesses who might testify against him; and pressuring Attorney General Jeff Sessions not to recuse himself from the Russia investigation.”

ABC is actively promoting an exclusive interview with Comey by George Stephanopoulos set to air Sunday night at 10 p.m. ET as a special edition of 20/20. In reporting on the special, ABC has leaked excerpts from the book, including a passage where Comey compares Trump to a Mob Boss in the Gambino crime family. Comey writes the following regarding a White House dinner with Trump where the President demanded his loyalty: “The demand was like Sammy the Bull’s Cosa Nostra induction ceremony.”

ABC also reports that Comey writes in his book that Trump is “unethical, and untethered to truth and institutional values” as well as “ego driven and about personal loyalty.”

Another passage reads as follows:

“One of the pivotal questions I presume that Bob Mueller’s team is investigating is whether or not in urging me to back the FBI off our investigation of his national security adviser [Michael Flynn] and in firing me, President Trump was attempting to obstruct justice, which is a federal crime. It’s certainly possible. There is at least circumstantial evidence in that regard, and there may be more that the Mueller team will assemble.”