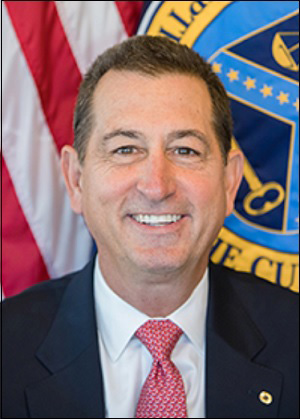 Joseph Otting, Trump’s Head of the Office of the Comptroller of the Currency

Under the Obama presidency, a key executive of the scandalized Wall Street bank, Citigroup, was secretly in charge of selecting the people who would fill top administration posts in Obama’s White House and cabinet, while the bank was in the midst of the largest taxpayer bailout in U.S. history. The staffing recommendations included top posts at the Justice Department, which would fail to prosecute any major Wall Street executives for the crimes leading up to the financial crash of 2008.  (See our prior reporting on this here and here.)

Under Trump, who ran on a populist platform, the top cop of Wall Street at the Securities and Exchange Commission, Jay Clayton, is a lawyer who had represented 8 of the 10 largest Wall Street banks prior to his nomination by Trump and confirmation by the U.S. Senate to become SEC Chairman. The U.S. Treasury Secretary, Steve Mnuchin, who also sits at the helm of the Financial Stability Oversight Council to make sure Wall Street doesn’t blow up the economy again, was actually a foreclosure king at OneWest Bank Group. The top national bank regulator, the Office of the Comptroller of the Currency, which oversees Wall Street’s biggest and serially charged banks like Citigroup and JPMorgan Chase, is now headed by Mnuchin’s former pal at OneWest Bank Group, Joseph Otting.

During Mnuchin’s Senate confirmation hearing, Senator Ron Wyden of Oregon had this to say:

‘Widow foreclosures’ on reverse mortgages – OneWest did more of those than anybody else. The bank defends its record on loan modifications, but it was found guilty of an illegal practice known as ‘dual tracking.’ One bank department tells homeowners to stop making payments so they can pursue modification, while another department presses on and hurtles them into foreclosure anyway.”

Last Thursday, the American people got a good look at how Otting plans to run the Office of the Comptroller of the Currency. The Federal agency released a statement advising that the insured bank under the Citigroup umbrella, Citibank, has been fined $70 million for failing to live up to its 2012 cease and desist order involving money laundering. But neither the press release nor the consent order provided a clue to the American people as to what Citibank had actually done. It was one of the least transparent documents that we have ever seen coming from a bank regulator, leaving the American people to wonder if a Wall Street bank, as is typical, engaged in billions of dollars of illegal activity and got off paying pennies on the dollar in a fine to a captured regulator.

What we do know is that the bank violated its 2012 cease and desist order from the OCC which pertained to the bank’s failure to follow anti-money laundering rules. The OCC wrote in 2012:

“The Bank has failed to adopt and implement a compliance program that adequately covers the required BSA/AML [Bank Secrecy Act/Anti-Money Laundering] program elements due to an inadequate system of internal controls and ineffective independent testing.  The Bank did not develop adequate due diligence on foreign correspondent bank customers and failed to file Suspicious Activity Reports (‘SARs’) related to its remote deposit capture/international cash letter instrument activity in a timely manner.”

Based on Citibank’s history, one has to wonder if violating anti-money laundering rules is part of its official business model.

On November 9-10, 1999 the U.S. Senate’s Permanent Subcommittee on Investigations conducted hearings into the dubious internal workings of Citibank.  Senator Carl Levin had this to say in his opening remarks:

Unfortunately, mainstream media is now consumed with Donald Trump and little else. Cable news, network news and the front pages of newspapers rarely do an in-depth investigative article on Wall Street’s continuing dark secrets – despite this being the industry that was responsible for the epic financial collapse of 2008-2010 – a collapse which has left the United States with the greatest wealth inequality in its history and tepid economic growth for a decade.