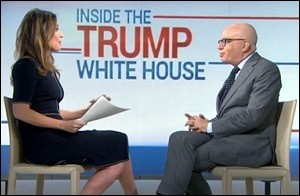 Michael Wolff Is Interviewed by Savannah Guthrie on the “Today” Show, Friday, January 5, 2018.

How does one make an unreleased book an even bigger bestseller than it already is? Threaten a libel suit and demand that the publisher not release the book – ever. Michael Wolff’s explosive book on the chaos and incompetency of the Trump administration, Fire and Fury: Inside the Trump White House, is now the number one bestseller on Amazon.

Yesterday Wolff posted blistering excerpts from the book at the Hollywood Reporter. The President is variously characterized by his own appointees as “a moron,” “dumb as s**t,” “a hopeless idiot,” or someone who has “lost his mind.”

Trump’s lawyer, Charles Harder of Harder Mirell & Abrams LLP, whipped off an 11-page letter to Wolff and Steve Rubin, President of Henry Holt and Company, the book’s publisher. Most of the letter consisted of boilerplate demands to retain documents and emails, an effort to strongly suggest that an actual lawsuit would follow. If, indeed, the lawyer had wanted to head into court, he could have asked a judge for an injunction to prevent publication. Instead, Harder simply demanded the following in a letter:

“Mr. Trump hereby demands that you immediately cease and desist from any further publication, release or dissemination of the Book, the Article, or any excerpts or summaries of either of them, to any person or entity, and that you issue a full and complete retraction and apology to my client as to all statements made about him in the Book and Article that lack competent evidentiary support.”

The publisher’s response was to effectively flip the bird to Trump and his legal team. The publisher announced that it would move up the publication date from January 9 to 9 a.m. this morning.

To say the legal threat backfired would be a gross understatement. After two solid hours of news coverage of the book and the legal threat on CNN last evening, by 7 p.m. Erin Burnett opened her CNN show waving a hard copy of the book, which the publisher now seemed to be readily handing out to all media takers.

It was also announced that Wolff had moved up his book tour, which he would launch on NBC’s “Today” show this morning. That would be followed by an interview on “Meet the Press” with Chuck Todd this Sunday.

During the “Today” show interview with Savannah Guthrie, Wolff had this to say about the threatening letter from Trump’s lawyer attempting to block the publication of the book:

“Where do I send the box of chocolates? Not only is he helping me sell books but he’s helping me prove the point of the book. This is extraordinary that a president of the United States would try to stop the publication of a book. This has not happened from other presidents, would not even happen from a CEO of a midsize company.”

As for the accuracy of the book, which has come under attack by Trump and his White House press office staff, Wolff told “Today” viewers that he had “recordings, I have notes, I am certainly and absolutely in every way comfortable with everything I have reported.” He also noted that he has written millions of words over the course of his career and said “I don’t think there has ever been one correction.”

Wolff is a veteran journalist who has written for New York Magazine, Vanity Fair, the Hollywood Reporter, USA Today and the Guardian. In a column in USA Today in January 2017, Wolff intimated that he understood that he would likely be attacked by Trump over the book. He wrote:

“Presidents are accused of many things and tend to respond judiciously. Trump, who likes to describe himself as a counter-puncher, tends, however, to respond in kind. This is partly because Twitter makes it easy to do, and offers a way around advisors and cooler heads who might urge otherwise. And this is, in part, because, so far it’s been an effective tactic for him.”

Adding to Trump’s furor over the book, the New Yorker’s John Cassidy published an excerpt from the book yesterday that further questioned the President’s fitness for office. Wolff wrote:

“Trump didn’t read. He didn’t really even skim. If it was print, it might as well not exist. Some believed that for all practical purposes he was no more than semiliterate …Some thought him dyslexic; certainly his comprehension was limited. Others concluded that he didn’t read because he didn’t have to, and that in fact this was one of his key attributes as a populist. He was postliterate — total television.

“But not only didn’t he read, he didn’t listen. He preferred to be the person talking. And he trusted his own expertise — no matter how paltry or irrelevant — more than anyone else’s. What’s more, he had an extremely short attention span, even when he thought you were worthy of attention.”

Is Wolff’s book an exaggeration? Or would a careful perusal of Trump’s own Tweets on his Twitter page make the identical case that his own appointees are making in the book.