We Agree: Oprah Don’t Do It 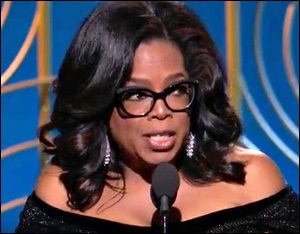 Today’s print edition of the New York Times carries an OpEd by Thomas Chatterton Williams with the terse headline, “Oprah Don’t Do It.”

The column follows a powerful speech delivered by Oprah Winfrey at the Golden Globe Awards on Sunday evening. (See video below.) That speech set Twitter and cable news ablaze with talk of an Oprah run for President in 2020. By Monday evening, CNN was reporting that she is “actively thinking” about a Presidential run.

In hearing that pronouncement on CNN, our first thought was that media outlets wouldn’t have the guts to tell a black female celebrity with the stature of Oprah Winfrey that she could doom the already shaky credibility of the Democratic Party with a run for the White House; that her lack of prior government service and national security naiveté would be weaponized against her by Republicans.

Instead of silence, however, Americans are showing they are mad as hell about the prospect of another celebrity billionaire totally lacking in government experience setting up shop in the White House.

Williams had this to say in the New York Times today:

“I am not immune to Oprah’s charms, but President Winfrey is a terrible idea. It also underscores the extent to which Trumpism – the kowtowing to celebrity and ratings, the repudiation of experience and expertise – has infected our civic life. The ideal post-Trump politician will, at the very least, be a deeply serious figure with a strong record of public service behind her.”

As for the Democratic Party being intimidated into shoving another candidate down the American people’s throats that they don’t want in the top office of the land, Williams added this succinct message:

“The idea that the presidency should become just another prize for celebrities – even the ones with whose politics we imagine we agree – is dangerous in the extreme. If the first year of the Trump administration has made anything clear, it’s that experience, knowledge, education and political wisdom matter tremendously. Governing is something else entirely from campaigning. And perhaps, most important, celebrities do not make excellent heads of state. The presidency is not a reality show, or for that matter, a talk show.”

One point that Williams misses is worth noting. Both Trump and Oprah are billionaires because of their brands. Oprah will have many of the same conflicts of interest as Trump. She is certainly not going to close the businesses bearing her “Oprah” trademark for a four or eight year stint in the Oval Office. Additionally, the hard choices that a Commander-in-Chief has to make regarding military attacks would diminish the wholesome, spiritual Oprah brand – raising the question as to how fit she would be as a Commander-in-Chief.

By yesterday afternoon, the prospect of another billionaire celebrity in the White House sent the pen of Mehdi Hasan at The Intercept into a fiery response. Hasan asked “Have We All Gone Bonkers,” adding that he is “old enough to remember when liberals gave a damn about experience, qualifications, and judgment; when Democrats mocked the idea of Trump — a former reality TV star and property developer who struggled to tell the difference between Hamas and Hezbollah — running for the presidency.”

Unlike Williams, Hasan pulled no punches in his assessment of Oprah’s fitness for the job. He wrote:

“Another clueless celebrity in possession of the nuclear codes? Another billionaire mogul who doesn’t like paying taxes in charge of the economy? And how would it be anything other than sheer hypocrisy for Democrats to offer an unqualified, inexperienced presidential candidate to the American electorate in 2020, given all that they said about Trump in 2016?

“Prior to Trump, the only presidents to never have served in public office prior to being elected to the White House were Zachary Taylor, Ulysses S. Grant, and Dwight Eisenhower. The first won the Mexican-American War; the second, the Civil War; and the third, the Second World War.

“Well, the Oprah fans might argue, she could surround herself with big brains. But isn’t that the argument that Trump supporters make, too? Do we really want another president deferring to unelected generals and Goldman Sachs?”

The Goldman Sachs reference should be taken seriously. As Wall Street On Parade has repeatedly reported, we have seen a Wall Street takeover of both the presidencies of Obama and Trump. It all happened behind a dark curtain between election day and inauguration day when Wall Street’s unelected cronies and lawyers staffed up both administrations as part of the “transition team” process. In the case of Obama’s transition team, the unseemly deference to Wall Street was kept out of public view until WikiLeaks released the damning emails showing how a Citigroup executive, Michael Froman, was in charge of the process of naming the people for top posts while his bank was in the midst of investigations for fraud and was receiving the largest taxpayer bailout in U.S. history after its stock collapsed.

In the case of Trump’s transition team, a pack of law firms that had supported Hillary Clinton’s candidacy were somehow in charge of the hiring for the Trump administration. Despite Trump’s denigration of Goldman Sachs on the campaign trail, Goldman Sachs’ veterans ended up in multiple major posts in the Trump era. (See “Here’s How Goldman Sachs Became the Overlord of the Trump Administration.”)

It’s time for Americans to get deadly serious about whom they put in charge of the U.S. economy, the U.S. financial system, the skyrocketing U.S. national debt and unprecedented wealth equality — not to mention those nuclear buttons being joked about on Twitter by the President of the United States.