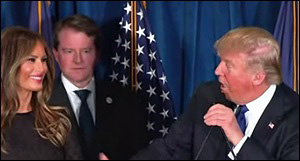 President Donald Trump’s White House Counsel, Don McGahn, has a long history of gutting campaign finance laws to the benefit of corporations. His wife, Shannon McGahn, also an attorney, has a long history in efforts to roll back financial regulations on Wall Street. They have become corporate America’s favorite power couple in Washington. We’ll get to the details in a moment but first some necessary background on how campaign finance law was brazenly corrupted at the U.S. Supreme Court.

In 2011, half of our research team (Pam Martens) filed an explosive exclusive with CounterPunch (which we now carry in our archives at Wall Street On Parade). The article revealed that a sitting justice on the U.S. Supreme Court, Clarence Thomas, had been entertained by billionaire Charles Koch and his wife, Elizabeth, at their lavish private club, the Vintage Club, in Indian Wells, California. The cozy meeting was part of an all-expenses-paid trip by Justice Thomas in January 2008 to attend the super-secretive Koch Brothers political network event in the Palm Springs area of California. According to Justice Thomas’ financial disclosure report, the Federalist Society paid his expenses for that trip, an organization that has received millions of dollars in funding from Koch brothers’ foundations. The meeting took place in the same year that the Supreme Court decided to hear the Citizens United case.

Charles Koch is not exactly the most wholesome billionaire for a sitting Supreme Court Justice to be meeting with. The company of which he and his brother, David, are majority owners is Koch Industries. In addition to paying tens of millions of dollars to settle violations of Federal and State laws, in 1999 60 Minutes aired a documentary showing that a jury found that Koch Industries had stolen oil from Federal lands “and lied about its purchases – 24 thousand times.”  Bill Koch, a dissident brother and whistleblower in the case, said profits on that oil were a minimum of $230 million.

The Supreme Court decided the Citizens United case on January 21, 2010. It opened the spigots to unlimited corporate money in elections and effectively gutted representative government in which U.S. citizens have a voice. Since that time, multi national corporations and Wall Street have effectively owned Washington.

The case had the stench of corruption from day one. Four of the nine U.S. Supreme Court Justices wrote a scathing dissent that raised the issue of unprincipled behavior on the part of the 5-judge majority, stating that they had ruled on issues that were not legally before the court.

Adding to the clouds around Justice Thomas was the fact that his wife, Virginia Thomas, had formed a tax exempt Tea Party advocacy group, Liberty Central, Inc., that was receiving large amounts of dark money. A former lawyer for the Charles G. Koch Foundation, Sarah Field, served as the General Counsel to the organization in 2010 and a former Koch lobbyist, Matt Schlapp, served on its Board of Directors.

The same year that Justice Clarence Thomas was chowing down with Charles Koch at his exclusive Vintage Club, President Trump’s current White House Counsel Don McGahn got himself appointed as a Commissioner to the Federal Election Commission (FEC). McGahn served in that capacity from July 2008 to September 2013. MSNBC reports the following about McGahn’s tenure at the FEC:

“…McGahn led the successful conservative effort to neuter the agency, with the result that today it is unable to respond to even seemingly egregious violations of campaign finance law. Soon after McGahn joined the FEC as its chair, its three Republican-appointed commissioners have consistently voted as a bloc against enforcement, stymieing the agency from taking action — a situation that has continued since he left.

“Lawrence Noble, a former FEC general counsel now with the Campaign Legal Center, which supports stricter campaign finance regulations, points out that the rise of super PACs, which has allowed the uber-wealthy to pour unlimited dollars into electoral politics, wasn’t inevitable after the Supreme Court’s 2010 Citizens United ruling. It happened thanks in part to the FEC’s decision — driven by McGahn and its other GOP-appointed commissioners — to interpret Citizens United broadly, rather than seeking to salvage what it could of campaign finance law.”

Now fast forward to January 20, 2017 – President Donald Trump’s inauguration day. On that day the mega law firm, Jones Day, announced that a stunning 12 of its law partners were moving into the Trump administration, including McGahn’s post as White House Counsel. What was particularly suspicious about that announcement was that Jones Day was not a fan of Donald Trump. Its law partners had supported Hillary Clinton for President. As Bloomberg News reported on March 16, 2017 “…Jones Day’s lawyers contributed only $7,422” to Trump’s campaign, as reported by the Center for Responsive Politics. “That compares with $267,899 given to Hillary Clinton’s campaign,” according to the article.

One key industry group that quietly cheered about the Jones Day contingency taking up stakes in the Trump administration was the mega Wall Street banks. The law firm’s clients include Goldman Sachs, Citigroup, JPMorgan Chase, Wells Fargo and Deutsche Bank according to its official client roster. 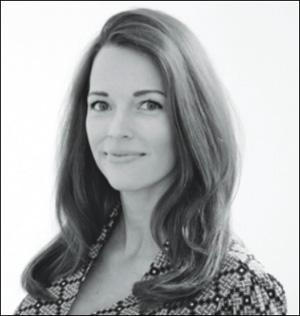 Wall Street is also happy to have McGahn’s attorney wife, Shannon McGahn, back in her post as Staff Director to Jeb Hensarling, Chair of the House Financial Services Committee that oversees Wall Street reform and is currently attempting to gut regulatory reforms that were passed under the Obama administration in 2010.

Last year we reported the following about Hensarling:

“Among Hensarling’s largest donors for his 2016 re-election campaign were every major Wall Street bank, including two admitted criminal felons (JPMorgan Chase and Citigroup’s Citicorp) as well as those charged with market rigging and serial frauds against the investing public. Wall Street mega banks giving $10,000 or more to Hensarling’s campaign included: Bank of America, $15,000; JPMorgan Chase $14,700; Goldman Sachs $12,700; UBS $10,500; Citigroup $10,000; Credit Suisse $10,000; Morgan Stanley $10,000; Wells Fargo $10,000; and Wall Street’s trade association, the Securities Industry and Financial Markets Association (SIFMA), which gave Hensarling $10,000. (Our source is the Center for Responsive Politics which notes that “The organizations themselves did not donate, rather the money came from the organizations’ PACs, their individual members or employees or owners, and those individuals’ immediate families.” Corporations are not legally allowed to donate directly to campaigns.)”

Hensarling is currently on a mission to gut the Consumer Financial Protection Bureau (CFPB) by smearing it as a “rogue” agency despite its past Herculean efforts to help the little guy against the real rogue’s gallery on Wall Street.

Wall Street loves and demands continuity government in Washington – regardless of who wins the Presidency. As we reported last year:

“Hensarling was a long time aide to the master of fronting for Wall Street deregulation – Senator Phil Gramm. Gramm served as Chair of the Senate Banking Committee from 1995 to 2000, which included the fateful year that the Gramm-Leach-Bliley Act was passed in 1999. That legislation repealed the Glass-Steagall Act which had protected the nation by separating banks holding insured deposits from the speculating investment banks of Wall Street. Just nine years after it was repealed, Wall Street crashed in epic fashion, taking the U.S. economy with it. Gramm’s blind march to the drumbeat of special interests was blamed by Time Magazine as a key contributor to the financial collapse in 2008. Time wrote:

“…Gramm was Washington’s most prominent and outspoken champion of financial deregulation. He played a leading role in writing and pushing through Congress the 1999 repeal of the Depression-era Glass-Steagall Act, which separated commercial banks from Wall Street. He also inserted a key provision into the 2000 Commodity Futures Modernization Act that exempted over-the-counter derivatives like credit-default swaps from regulation by the Commodity Futures Trading Commission. Credit-default swaps took down AIG, which has cost the U.S. $150 billion thus far.”

According to the database at the Center for Responsive Politics, Gramm’s largest campaign donors included the very same serially charged Wall Street banks that are now financing Hensarling. (See here.)