Rising Treasury Yields Pose Risk for Those Over-Weighted in Stocks 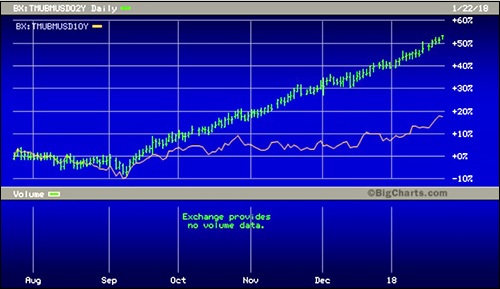 President Donald Trump’s persistence on his Twitter page in touting how well the stock market is doing is distracting investors from a scary, negative indicator for stocks – rising yields on U.S. Treasury securities.

Since September of last year, yields have been on a steady and sharp upward trajectory, reminiscent of standing at the base of a mogul run in Colorado and craning one’s neck toward the summit. The complacency the stock market is showing toward the fierce rise in yields may also turn out to be a dangerous, slippery slope for those heavily weighted in stocks.

Likewise, the benchmark 10-year U.S. Treasury Note has moved from a yield of 2.06 percent on November 9, 2016 to 2.65 percent this morning, getting close to the 3 percent level where yield buyers start to pay close attention.

The cash dividend yield on the Standard and Poor’s 500 index of stocks pays just 1.75 percent, having lost its yield attraction from all those recent record highs in stock prices.

The corporate tax cut that was supposed to be such a boon to the stock market may be getting a re-think among sophisticated investors. The tax cut giveaway will result in growing Federal deficits, meaning that the U.S. Treasury will have to pump up the amount of new debt it is issuing. To attract buyers despite the headwinds of increasing supply, yields may have to rise in the market to be able to hold successful auctions of U.S. debt.

Increasing supply will come in the face of shrinking demand for Treasuries from the Federal Reserve. The Federal Reserve has published its schedule of how it plans to cut back on its purchases of U.S. Treasuries in order to “normalize” its balance sheet from its Quantitative Easing (QE) days when it sopped up more than $3 trillion of Treasury and mortgage-backed bond holdings. The first cutback came in October of last year with the Fed shrinking the amount of maturing Treasury principal it was rolling over into new Treasuries by $6 billion a month. That figure was boosted to $12 billion this month. The shrinkage amount will grow gradually until October of this year when the Fed will roll over $30 billion less each month in Treasuries going forward than it had in prior years. (The Fed also acquired huge holdings in mortgage-backed bonds during the financial crisis and it is trimming its rollover of maturing principal in those as well.)

The stock market has been riding the euphoria of anticipating the tax cut benefit to corporate earnings. It seems to have forgotten about what the attendant budget deficits would mean for rising Treasury yields and those higher yields providing a competitive seduction to investors who increasingly see the stock market as asset bubble terrain.