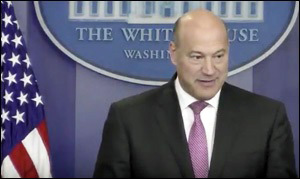 To hear Gary Cohn, the immediate past President of Goldman Sachs tell it, U.S. President Donald Trump will be feted as a beloved world leader when he arrives in Davos, Switzerland tomorrow morning for the World Economic Forum.

Despite Trump hurling many insults at Goldman Sachs during the Presidential campaign, Cohn, who had spent much of his adult life at Goldman, was quickly picked by Trump to be his Director of the National Economic Council just one month after the election in 2016.

Yesterday Cohn shared the podium with Press Secretary Sarah Huckabee Sanders at the White House press briefing and had this to say about Trump’s trip to Davos:

“The President departs tomorrow evening and arrives Thursday morning local time in Switzerland. On Thursday he will have a variety of meetings with world leaders and a quick meeting with Klaus Schwab, the founder of the World Economic Forum. On Thursday night, the World Economic Forum will host a reception with world leaders to honor the President. Later on that night, the President will host a small dinner with select European companies to share our economic success story and to encourage them to continue to invest in America.”

On Friday, continued Cohn, Trump would deliver a speech at the event.

The World Economic Forum is considered by many to be an elitist group of global financiers and multinational CEOs who meet annually to maintain their iron grip on the economic and regulatory policies that have elevated them into the rarefied world of the super rich while leaving the United States and other parts of the world with the greatest wealth and income inequality since the Great Depression. Trump’s former chief strategist, Steve Bannon, once characterized the elitist swamp he wanted to drain as “the party of Davos.”

The event was founded in 1971 and since that time this is a list of U.S. Presidents who have not attended: Richard Nixon, Gerald Ford, Jimmy Carter, Ronald Reagan, George H.W. Bush, George W. Bush, and Barack Obama. (Reagan did appear via a video link during his presidency and Bill Clinton, whose presidential campaigns were funded by the Wall Street elite, attended in 2000.)

Why would all of these other U.S. presidents snub the event while Donald Trump, who campaigned on a populist platform, head for the event with much of his cabinet along for the ride. Cohn along with U.S. Treasury Secretary Steve Mnuchin, Secretary of State Rex Tillerson, Secretary of Commerce Wilbur Ross, Secretary of Labor Alex Acosta, and numerous other cabinet secretaries will be joining Trump in Davos. According to multiple media sources, even Trump’s son-in-law, Jared Kushner, who has been scandalized by the Russia investigation, will be on the trip.

The World Economic Forum has branded this year’s event as “Creating a Shared Future in a Fractured World.” The event is well known for sprinkling in some seminars on reducing economic inequality. The hypocrisy of this exercise was captured neatly in a blog post last Friday, titled “Dutiful Dirges of Davos,” by Branko Milanovic who wrote:

“This return to the industrial relations and tax policies of the early 19th century is bizarrely spearheaded by people who speak the language of equality, respect, participation, and transparency. None of them is in favor of ‘Master and Servant Act’ or forced labor. It just so happened that the language of equality has been harnessed in the pursuit of structurally most inegalitarian policies over the past fifty years, or more…

“They are loath to pay a living wage, but they will fund a philharmonic orchestra. They will ban unions, but they will organize a workshop on transparency in government.”

Trump’s trip to Davos comes one week after a new Gallup poll was released showing global approval of US leadership at just 30%, behind China at 31% and Russia at 27%. Germany moved into the top slot in the world with a leadership approval rating of 41%.

German Chancellor Angela Merkel delivered a speech today at the Forum and warned against populist “poison.” The jab was likely directed at forces within the European Union as well as at Trump.