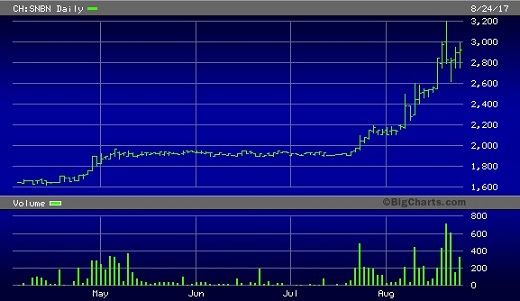 The Swiss central bank may be part of a modern age Tulip Bubble.

Since June 30 of last year, Switzerland’s central bank, the Swiss National Bank, has increased its stock holdings of five U.S. social media/tech stocks from $5.3 billion to $9.38 billion, an increase of 77 percent in 12 months. The stocks are Apple, Alphabet (parent to Google), Microsoft, Amazon and Facebook. The stock information comes from a 13F filing the Swiss National Bank made this month with the U.S. Securities and Exchange Commission (SEC), a quarterly form required of institutional investment managers who manage $100 million or more.

According to the SEC form, the Swiss central bank owns the following positions as of June 30, 2017: $2.76 billion in Apple common stock; over $2 billion in two classes of Alphabet stock; $1.864 billion in Microsoft common; $1.434 billion in Amazon common; and $1.32 billion in Facebook Class A. It owns tens of billions of dollars more in other U.S. and global stocks.

Adding to the peculiarity of this central bank, its own stock actually trades on a stock exchange and its stock price has soared by 88 percent since April. (See chart above.)

According to the website of the Swiss National Bank, it “does not pursue any strategic interests in its equity investments and as a general rule does not engage in any stock selection.” It says its share holdings are “managed passively by replicating a combination of different indices.”

It has a flexible do-no-evil expressed philosophy in buying stocks for its portfolio, writing that it “avoids shares in companies which produce internationally banned weapons, seriously violate fundamental human rights or systematically cause severe environmental damage.” That philosophy has not prevented it from (as of June 30, 2017) owning $464 million in Philip Morris International, which says it is “the world’s leading tobacco company” and that “six of the world’s top international brands are ours, including Marlboro, the world’s number one.”

In 1999, the U.S. Department of Justice sued Philip Morris and other large tobacco companies under the Racketeer Influenced and Corrupt Organizations Act (RICO).  The government charged that the tobacco companies engaged in a four-decade conspiracy to mislead the public about the dangers of smoking, distort the dangers of secondhand smoke, lie about the addictiveness of nicotine, deceitfully market cigarettes as light or low tar while fully aware that these products were as hazardous as regular cigarettes, and unconscionably target the youth market as “replacement smokers.”

Following a nine-month bench trial, on August 17, 2006, Judge Gladys Kessler of the U.S. District Court for the District of Columbia issued a 1,683 page opinion.  The Court found that “Cigarette smoking causes disease, suffering, and death.”

The Swiss National Bank is one of more than a dozen central banks that are now investing in publicly traded stocks.  Economist Ed Yardeni had this to say about the practice last year:

“In the long run, it’s hard to imagine that having the central monetary planners buy corporate bonds and stocks with the money they print can end well. In effect, the central banks are turning into the world’s biggest hedge funds, financed by their own internal primary (money-printing) dealers and backstopped by the government — which can always borrow more from the central bank or force taxpayers to make good on this Ponzi scheme…”

Add the central banks’ stock binge to the trillions of dollars that U.S. corporations have spent buying back their own stock over the past decade and we are clearly in tulip territory.