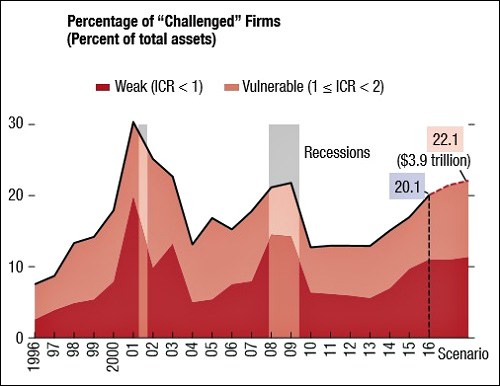 According to recent studies, U.S. corporations’ debt levels could pose some serious headwinds for the United States’ economy in the next major downturn. In April, the International Monetary Fund announced the following red flags:

The U.S. corporate sector has added $7.8 trillion in debt and other liabilities since 2010;

Among S&P 500 firms, median net debt “is close to a historic high of more than 1 ½ times earnings”;

Looking at a “broader set of nearly 4,000 firms accounting for about half of the economy-wide corporate sector balance sheet, suggests a similar rise in leverage across almost all sectors to levels exceeding those prevailing just before the global financial crisis”;

Debt is especially high “in the energy, real estate, and utilities sectors, ranging between four and six times earnings”;

“The average interest coverage ratio — a measure of the ability for current earnings to cover interest expenses — has fallen sharply over the past two years. Earnings have dropped to less than six times interest expense, close to the weakest multiple since the onset of the global financial crisis.”

In July 2016, S&P Global released a report which found that “global corporate credit quality has been weakening over recent years.” It said that in a sampling of about 14,400 nonfinancial corporations around the globe, “two out of five” are highly leveraged. The report noted further:

“Our base case anticipates an orderly slowdown of credit growth relative to real growth and inflation, as the latter two factors gradually rise in coming years. However, it is not hard to envisage more negative outcomes where a credit crunch (‘Crexit’ scenario) occurs, should inflation return, rates rise, and bond prices fall. Alternatively, a worst-case scenario comprising several negative economic and political shocks (such as a potential fallout from Brexit) could unnerve lenders, causing them to pull back from extending credit to higher-risk borrowers.”

In December of last year, the Financial Times obtained a study from a Wall Street trade group, the Securities Industry and Financial Markets Association (SIFMA), which found that if you added short-term company borrowings such as those found in money market funds to outstanding corporate debt, the total comes to a whopping $11.3 trillion. The article notes the following:

“Much of the debt sold by companies in recent years has been used to buy back their own shares, pay out higher dividends or finance big mergers and acquisitions. While these buybacks funded by cheap borrowing have boosted earnings, a missing ingredient has been spending on investment to build their businesses.”

Economist Michael Hudson has a great deal to say about corporations buying back their own shares in his book, Killing the Host: How Financial Parasites and Debt Bondage Destroy the Global Economy. Hudson writes in one chapter: