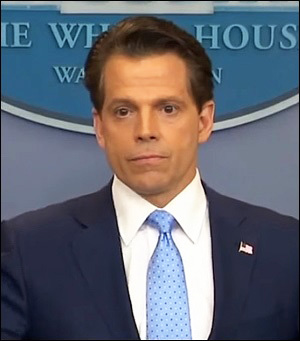 Were it not for the profanity-laced tirade that Donald Trump’s briefly tenured Director of Communications offered up to a New Yorker reporter, it might be considered a badge of honor to get fired from both the great vampire squid, Goldman Sachs, and by the President whose administration is firmly ensnared in Goldman Sachs’ tentacles.

Wall Street veteran and hedge fund titan, Anthony Scaramucci, who was fired yesterday after a 10-day stint as Director of Communications for Trump’s White House, told reporter Courtney Comstock in 2010 at Business Insider that he had been “fired from Goldman a year and five months” into his tenure there as an investment banker. Scaramucci was rehired by Goldman a few months later, but in a sales position.

Scaramucci’s ties to Wall Street are extensive, including a stint as Managing Director at Lehman Brothers, the iconic investment bank which filed bankruptcy in September 2008 during the height of the financial crisis.

Scaramucci founded SkyBridge Capital in 2005 and in 2010 it purchased a hedge fund of funds from Citigroup, the behemoth Wall Street bank that received the largest bailout in U.S. history during the financial crisis.

In January of this year, SkyBridge Capital announced that it had agreed to sell a majority stake to RON Transatlantic and HNA Group, a Chinese conglomerate. Reuters reported yesterday that the sale is still “under review by the Committee on Foreign Investment in the United States, known as CFIUS.”

Bloomberg News reported on July 25 that Scaramucci was seeking a tax deferral on his huge stake in Skybridge as a result of joining the Trump administration. Federal law allows persons accepting a position in the executive branch to defer capital gains taxes if they are required to sell assets to avoid conflicts of interest while serving in government.

Former Goldman Sachs CEO, Henry (Hank) Paulson, immediately filed to sell a $500 million stake in shares of Goldman Sachs after his 2006 Senate confirmation to become U.S. Treasury Secretary in the George W. Bush administration. According to The Economist magazine, Paulson may have saved up to $200 million from the maneuver.