Can the Stock Market Continue Its Rise While the U.S. Dollar Slumps? 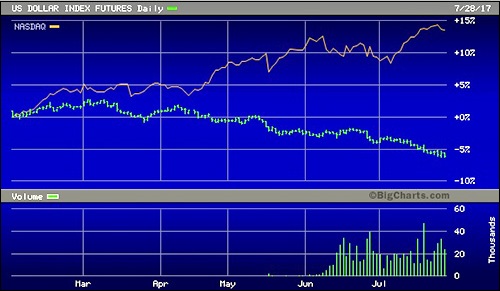 Back on January 12, 2017, Wall Street On Parade had a foreboding about the President-elect and his impact on the nation’s currency. We wrote at the time:

“The President of the United States is typically viewed as the person whose top job is to inspire confidence in the dignity, integrity and sanity of his leadership of the country. But the presser held by President-elect Donald Trump yesterday, the first in six months and likely viewed by world leaders around the globe, was short on confidence building and long on slandering the American media and U.S. intelligence agencies. In short order, the U.S. dollar took a dive. Trump has yet to assimilate the concept that his words no longer belong just to him but attach themselves like flypaper to the credibility of the most powerful nation on earth.”

This morning, reporters at Bloomberg News are also worrying about the sagging U.S. dollar, writing that “there’s no better place for investors to express their views about how a nation is managing its affairs than the $5.1 trillion-a-day global market for foreign exchange.” The article also notes that on July 20 of this year, when news reports surfaced that the Trump campaign/Russia investigation had expanded to include his personal finances, the U.S. dollar “immediately sank to an 11-month low. Just two days earlier, the currency slumped after a Republican effort to overhaul health care broke down.”

There’s an old maxim on Wall Street that the trend is your friend, meaning in this case that the downward thrust in the U.S. dollar could become a lasting trend under this President. This possibility has not escaped the Masters of the Universe on Wall Street. The Bloomberg article points out that: “Hedge funds are piling into bearish bets on the dollar, and now have the biggest net short position in four years.”

Contrasted sharply against this declining confidence is the behavior of the U.S. stock market averages this year, with the Dow Jones Industrial Average up 10.5 percent while the thundering herd of big tech stocks on the Nasdaq Stock Market have catapulted it to an 18.4 percent gain year-to-date.

Trading action on the Nasdaq last Thursday, however, was a potential harbinger of bad things to come. After setting a new record in the a.m. hours, the Nasdaq Composite tanked to an intraday loss of 104 points in the afternoon before paring that loss significantly by the close. The action looked like panic selling to many Wall Street veterans.

The panicky afternoon mood was heightened by the action in the Dow Jones Transportation Index on Thursday. Transports are widely seen as a measure of the nation’s future economic prospects as these are the companies that ship the nation’s goods to markets — a barometer of just how much consumer demand there is for these goods. Consumers in the U.S. represent two-thirds of Gross Domestic Product (GDP), thus their confidence in the leadership in Washington matters greatly.

“The Dow Jones Transportation Average plunged Thursday toward its worst day in 13 months, with all 20 components contributing to losses. The index dropped 327 points, or 3.5%, the biggest point and percentage declines since it tumbled 351 points, or 4.6%, on June 24, 2016.”