Earnings Rise with Boost from Falling U.S. Dollar But Consumers Will Bear the Brunt of Rising Prices 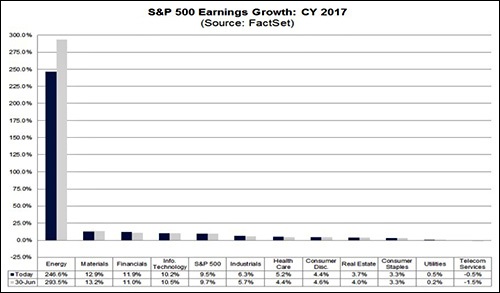 There seems to be an unlimited supply of methods in which the rich in America keep getting richer and the average Joe picks up the tab. (Think about the $16 trillion secret bailout of Wall Street by the Federal Reserve from 2007 to 2010 for the quintessential example.)

Yesterday, Fortune Magazine ran this sobering headline: “The Wealth Gap in the U.S. Is Worse Than In Russia or Iran.” The article quotes Richard Florida, author of The New Urban Crisis, as follows:

Against that backdrop comes news from FactSet last Friday that with 57 percent of the companies in the Standard and Poor’s 500 Index reporting actual earnings results for the second quarter of 2017, “ten sectors are reporting year-over-year earnings growth, led by the Energy, Information Technology, and Financials sectors.” FactSet adds this: “The only sector reporting a year-over-year decline in earnings is the Consumer Discretionary sector.” That would be the sector in which the average Joe lives.

Reuters has even more cheery news for the super rich who own the bulk of the shares of the S&P 500. The wire service reports that “The S&P 500 index is on track to post back-to-back, double-digit quarterly earnings growth for the first time in almost six years, and the trend could continue as a weak U.S. dollar and global growth help boost results.”

Unfortunately for the little guy, a weakening U.S. dollar causes price increases on imported goods from countries whose currencies have risen against the falling U.S. dollar. Add this to stagnating wages for the middle class, spiraling health care costs, the next generation buried under $1.325 trillion of student debt (much of it loaded onto their shoulders by the same Wall Street predators who crashed the U.S. financial system in 2008) and one can see why America might feel like Sri Lanka to many of its citizens instead of the much vaunted meritocracy that Wall Street titans like to portray to the rest of the world.