Should the Federal Reserve Be Doing the Nation’s Work with a Skeleton Crew? 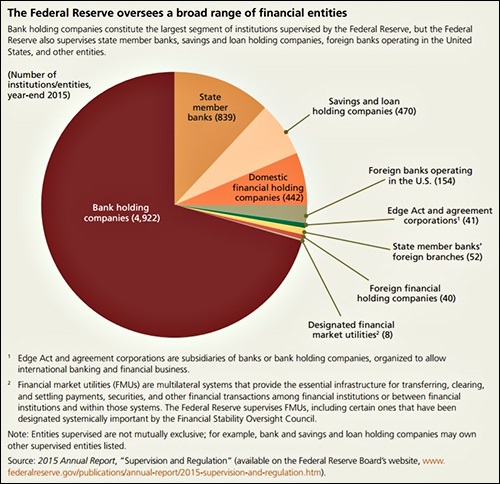 The Fed’s Committee on Supervision and Regulation consists of just Powell and Brainard. And yet, this is what the Fed’s 2015 Annual Report describes as the institutions the Fed supervises:

154 Foreign Banks Operating in the U.S.

Along with other entities per the graph above.

There has long been the suspicion that the Fed has farmed out much of its work of supervising the largest and serially malfeasant Wall Street banks to the Federal Reserve Bank of New York. There has also long been the suspicion that the New York Fed has grown too cozy with the banks it oversees to do the job properly. (See related articles below.)

The Trump administration appears intent on levitating the stock market by promising Wall Street more deregulation. The public must never forget that the Federal Reserve wore blinders and Congress sat on its hands as Wall Street spun out of control in a frenzy of speculative excess and corruption, leading to the greatest financial collapse from 2008 to 2010 since the Great Depression. Two-member committees at the Fed are a brazen affront to what this nation has been put through at the hands of Wall Street and its misguided regulators.