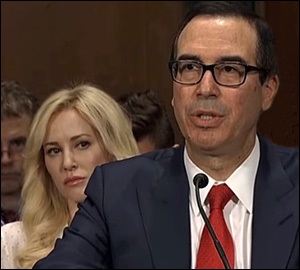 If the plan was to soften the grilling by Democratic Senators at yesterday’s Senate Banking Committee hearing by bringing along his Stoic-faced fiancée Louise Linton, U.S. Treasury Secretary Steven Mnuchin was disappointed. Neither Linton nor Mnuchin should have been surprised. Mnuchin had faced an equally hostile reception from Democrats at his January 19 confirmation hearing before the Senate Finance Committee.

During yesterday’s hearing Mnuchin dispelled the lie that the Trump administration has fostered for months — that it was considering restoring the Glass-Steagall Act and breaking up the big banks on Wall Street. After Mnuchin attempted to say this had never been their position, Senator Elizabeth Warren called his testimony “bizarre,” “crazy,” and “like something straight out of George Orwell.”

Mnuchin’s reception from Senator Catherine Cortez Masto of Nevada was equally frosty. Masto, who previously served as the Attorney General of Nevada for eight years, told Mnuchin that “the dancing around that you’ve done” reminded her of “bankers and Wall Street executives who were in my conference room as Attorney General during the worst foreclosure crisis we’ve ever seen.”

Masto reminded Mnuchin that he had recently spoken at a conference “where the cheapest ticket to attend cost $12,000.” Masto said Mnuchin had joked at the time that “you should all thank me for your bank stocks doing better.” She said the remark had come during Mnuchin’s comments about his efforts to “roll back Wall Street reform, including under an Executive Order signed by President Trump before a room full of powerful Wall Street executives.”

After reading desperate pleas from her constituents to stand firm against the Wall Street banks, Masto told Mnuchin: “I have not heard today anything that you have said that is looking out for the interests of the people that I just talked about.” Mnuchin said he could reassure Masto that he was interested in looking out for all of those people.

The Democrats’ reaction to Mnuchin was something of a replay of what had occurred at his January 19 confirmation hearing before the Senate Finance Committee. A particularly harsh assessment had come from Senator Ron Wyden, who stated the following:

Before the confirmation hearing concluded, Senator Wyden added the following:

Louise Linton had also sat stoically behind her man at the January 19 confirmation hearing.