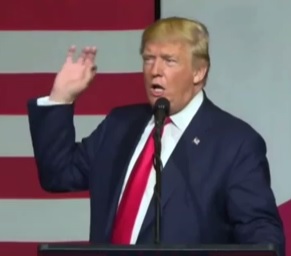 Donald Trump, Speaking at a Rally in West Palm Beach, Florida on October 13, 2016

The President of the United States is typically viewed as the person whose top job is to inspire confidence in the dignity, integrity and sanity of his leadership of the country. But the presser held by President-elect Donald Trump yesterday, the first in six months and likely viewed by world leaders around the globe, was short on confidence building and long on slandering the American media and U.S. intelligence agencies. In short order, the U.S. dollar took a dive. Trump has yet to assimilate the concept that his words no longer belong just to him but attach themselves like flypaper to the credibility of the most powerful nation on earth.

At times, the press conference felt more like an unruly street fight than a media Q&A by the man who will be sworn in as the 45th President of the United States in just nine days. Trump had his gang lined up on one side: his lawyer, the Vice President-elect, his two sons and one daughter. On the other side was the media, filled with questions on newly leaked documents about Trump’s relationship with Russia.

On Tuesday, BuzzFeed reporters Ken Bensinger, Miriam Elder and Mark Schoofs (a 2000 Pulitzer Prize winner for his work at the Village Voice) released an article that included a 35-page dossier of unsubstantiated allegations of misconduct by Trump with prostitutes in Russia and coordination between some of his campaign aides and Russian operatives. When asked about the report during his press conference, Trump used the words “sick,” “crap,” and “something that Nazi Germany would have done.” Trump also referred to one media outlet as “a failing pile of garbage,” leaving diplomats around the world shaking their heads and sending dollar traders to the exits.

As evidenced by the video clip below from the press conference, things became completely unhinged 52 minutes into the event. When asked about the report on his ties to Russia, Trump said:

“I think it was disgraceful, disgraceful that the intelligence agencies allowed any information that turned out to be so false and fake out. I think it’s a disgrace, and I say that, and I say that, and that’s something that Nazi Germany would have done and did do. I think it’s a disgrace. That information that was false and fake and never happened got released to the public. As far as BuzzFeed, which is a failing pile of garbage, writing it, I think they’re going to suffer the consequences. They already are. And as far as CNN going out of their way to build it up…”

The exchange had the surreal feel of the Jerry Seinfeld Show episode with the “no soup for you!” tyrannical owner of the soup restaurant.

Today, the front page of the New York Times’ print edition has filled in more titillating details, reporting that Christopher Steele, a former spy who had worked  for the British intelligence agency, MI6, was responsible for much of the leaked dossier. After retiring from the spy games, Steele had formed Orbis Business Intelligence, a firm that conducts commercial intelligence as well as opposition research for political campaigns.

On Monday, Senator Bernie Sanders appeared on a CNN Town Hall, urging the media to focus on the critical economic issues impacting the future of America. It’s tough to see how those critical issues can now compete with a story filled with spies, prostitutes and campaign operatives in Russia.