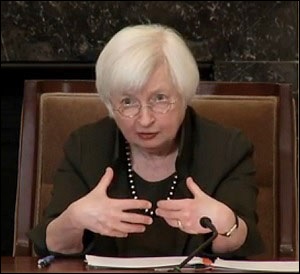 Last night the Federal Reserve convened a Town Hall meeting via webcast with K-12 teachers and college educators of economics and history. Federal Reserve Chair Janet Yellen delivered a speech and then took a series of questions from teachers. It was during the Q&A period that Yellen gave a sobering assessment of the long-term prospects for the U.S. At numerous points, Yellen echoed the income inequality themes that Senator Bernie Sanders raised repeatedly at his rallies around the country during the presidential primaries.

When asked about the biggest obstacles to the U.S. economy over the short and long term, Yellen said she did not have serious concerns over the short term but was worried about the longer term. In addition to productivity concerns, Yellen stated: (See video clip below.)

“We have seen over many decades now that the returns – the wages and income – of people with more education and higher skills have continued to increase systematically relative to those with less education. By some measures, men with a high school education or less are seeing not only stagnant incomes but the disappearance of jobs that afforded them reasonably secure lives and retirements. And these are problems that really lie outside the scope of what the Federal Reserve is able to address and I think they represent longer term structural trends in the global economy.”

In a similar vein, Yellen remarked:

“I also worry a great deal about inequality and the fact that the largest share of gains from aggregate productivity growth have gone to workers at the top of the income distribution. And the gap we’re seeing, as I mentioned, between wages of those with a college education and high school or less have just continued to increase. I mean you can look at some measures that suggest that real wages of high school educated workers have essentially been stagnant for several decades and there’s some recent research that shows that a far smaller share of young people – if you think about the American Dream, that people expect their children to do better than they did, for generations to progress – a far smaller share of young people today are doing as well or better than their parents than was true for most of the post war period.”

“Labor participation rates for prime age men have continued to move south, which is a disturbing trend. A very shocking finding, this was a finding of the individuals Angus Deaton and Anne Case – Angus Deaton won the Nobel Prize last year [he actually won the award in 2015] is that the mortality rates of high school educated whites in the 45 to 54 year age bracket are actually rising, which is an extraordinary difference from what we’ve seen in other countries and in the post war period and it seems to be related to suicide and health issues that maybe relate to substance abuse. The hypothesis is that this is a consequence in reflection of greater economic insecurity. So, obviously, those are very disturbing trends.”

The most problematic part of Yellen’s speech and the Q&A that followed is that she doesn’t seem to understand that it was brazen fraud on the part of the Wall Street banks that are supervised by the Federal Reserve that caused the epic 2007-2010 financial crash and that it was Wall Street deregulation pushed for by Alan Greenspan, during his Chairmanship of the Federal Reserve, that allowed the fraud to metastasize at every major Wall Street bank leading into the 2008 collapse.

When asked about what should be taught in college level Money and Banking courses, Yellen said information on the most recent financial crash should be included in the curriculum. But when she cited numerous causes for the crash, such as housing, subprime debt, complex securitizations, and the ratings agencies, not once did Yellen indicate that outrageous frauds on the part of the Wall Street banks were prevalent in every one of those areas.

In the case of housing, the major Wall Street banks, as we now know from whistleblowers inside those institutions, were knowingly making and/or buying liar loans that were issued to people who had no hope of being able to make their mortgage payments on a sustained basis. Then the Wall Street banks paid the rating agencies to give a triple-A rating to those fraudulently bundled loans, which were then sold to public pensions funds and other investors. These fraudulent pooled mortgages were the “complex securitizations” that Yellen benignly referred to.

Some Wall Street banks even allowed hedge funds to design the “complex securitizations” so that they would fail. With the superior knowledge that bogus mortgages were packaged in the deal and would default, the hedge funds were able to make huge profits as the unknowing investors lost all or almost all of their money. This was not some innocent quirk of complex markets – this was intentional fraud that occurred time and again under the nose of the Federal Reserve and its bank examiners.

Yellen’s reach-out to teachers around the country suggests that the Federal Reserve is attempting to foster the image that it is as wholesome as apple pie or a cuddly kitten. The harsh reality is that the Fed allowed the massive buildup of toxic practices at the banks it supervised; it failed to see the early warning signs that an epic crash was coming; and it has continued to allow the mass concentration of high risk derivatives on the books of the insured, deposit-taking units of the serially corrupt Wall Street banks, ensuring that another crash is in our nation’s future unless meaningful reforms are made very soon.

At the top of that reform list is to sever the Fed’s role of supervising the banks. Its mandate is monetary policy and it has more than convincingly shown that its cozy role with the Wall Street banks prevents it from being an effective regulator.

The most critical question that no teacher asked of Yellen is this: why are you still wearing blinders about the real reasons for the greatest financial crash since the Great Depression. Until Fed Chair Yellen deals openly and honestly with the American people on this critical point, the Fed will continue to lack the trust and confidence of the majority of Americans.