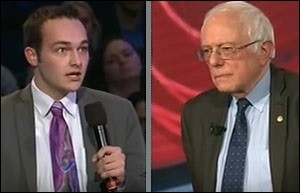 Just 11 days before Donald Trump is sworn into office as the 45th President of the United States, CNN hosted a Town Hall with Senator Bernie Sanders fielding a broad range of grave questions from people in all walks of life on where the country is heading. The event was held at George Washington University in Washington, D.C. and aired on CNN at 9 p.m. ET last evening. Chris Cuomo was the moderator.

Sanders’ no-holds-barred answers and the audience’s warm embrace of his message, provided the distinct feeling that Sanders may be positioning for another presidential run in 2020 to bring to fruition his promised political revolution in the United States.

Sawyer Neale, the youngest Bernie Sanders delegate from Pennsylvania at the Democratic Convention last year, was in the audience and asked the question that was on everyone’s mind: would Sanders run again in 2020.

Neale said: “You motivated a generation of voters by talking about issues like health care, criminal justice, income inequality. I’m afraid with Trump in the White House, with Republicans occupying the majority [of statehouses] all around the country, that this is on the line.” He then directly asked if Sanders would consider a 2020 run.

Sanders responded that it’s too early to be talking about the next presidential race. What is important, said Sanders, is for everyone to engage and protect critical programs like Social Security and Medicare from being gutted in order to give billions of dollars in tax breaks to the rich.

A young teacher asked Sanders what he and other members of Congress are going to do about Trump’s deportation plans. She said she had numerous undocumented students in her classes and they are frightened about being deported. She asked: “Where can they find hope?” Sanders said this topic was “emotional” to him. His father, he said, came to this country at age 17 with “no money, no education, dropped out of school when he was 16.” Sanders said he is hearing from Muslims and Latinos all over the country “that they are frightened” because Trump has promised that his administration will be picking people up and “throwing millions of people out of this country.” Sanders said Trump’s campaign had spread bigotry and xenophobia and ignored the fact that “we are a great and unique country because of our diversity.”

Curiously, CNN seemed to be giving Sanders a broad stage to deliver his message. On the same day as the Town Hall, CNN published an opinion piece by Sanders in which he pounded away on the same themes that had turned out tens of thousands of supporters to his rallies during the primaries.

“How do we stop the movement toward oligarchy in our country in which the economic and political life of the United States is increasingly controlled by a handful of billionaires?

“Are we content with the grotesque level of income and wealth inequality that we are experiencing? Should the top one-tenth of 1 percent own almost as much wealth as the bottom 90 percent? Should one family in this country, the Waltons of the Walmart retail chain, own as much as the bottom 40 percent of our people? Should 52 percent of all new income be going into the pockets of the top 1 percent?

“While the very rich become much richer, are we satisfied with having the highest rate of childhood poverty of almost any major country on earth? Can a worker really survive on the current federal minimum wage of $7.25 an hour? How can a working-class family afford $15,000 a year for childcare? How can a senior citizen or a disabled veteran get by on $13,000 a year from Social Security?

“What can be done about a political system in which the very rich are able to spend unlimited sums of money to elect candidates who represent their interests? Is that really what democracy is about?…

“Why is the richest country in the history of the world the only major country not to provide health care to all as a right, despite spending much more per capita? Why are we one of the very few countries on earth not to provide paid family and medical leave? With the five major drug companies making over $50 billion in profits last year, why do we end up paying, by far, the highest prices in the world for prescription drugs?

“How do we succeed in a competitive global economy if we do not have the best educated workforce in the world? And how can we have that quality workforce if so many of our young people are unable to afford higher education or leave school deeply in debt? Not so many years ago, we had the highest percentage of college graduates in the world. Now we don’t even rank in the top ten. What can we do to make sure that every American, regardless of income, gets all of the education he or she needs?”

On the last point, Sanders said during the Town Hall that he had met a young woman in Iowa who wanted to be a Dentist. She now has $400,000 in student loans as a result of that quest.

As another sign that Sanders plans to lead an assault on any Trump plans to gut Social Security, Medicare or Medicaid, an email went out this morning from Our Revolution with the subject line: “Bernie needs you to call your senator.” The email said:

“During his campaign, Trump promised he would make no cuts to Social Security, Medicare and Medicaid. He said it would be unfair to the people who have been paying into those programs for years.

“Now Republicans have proposed a budget that would throw 30 million Americans off their health insurance. They want to privatize Medicare, raise prescription costs, and reduce Social Security benefits, which serves as the primary source of income for the majority of seniors.”

The email indicated that Senator Sanders is introducing a budget amendment tomorrow “that would prevent Senate Republicans from breaking Donald Trump’s campaign promise to make no cuts to Medicare, Medicaid, and Social Security.”

The following phone number was provided for citizens to call their own Senator and demand that the Senate holds Trump to his promise to make no cuts to these essential programs: 877-826-4344.

As a growing roster of billionaires are set to take their cabinet seats in the Trump administration, it’s becoming increasingly clear just whom the real populist candidate was in the 2016 race.