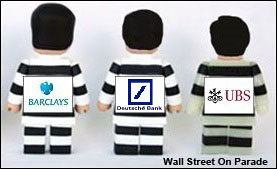 Lawyers representing traders who allege they were ripped off by a group of colluding global banks filed eye-popping evidence in a Manhattan Federal Court yesterday showing that even as global banks were being criminally probed for rigging currency markets, they continued to engage in rigging the silver market, with a UBS trader referring to the group as the “mafia.”

In order to settle the charges against it in the matter, yesterday’s filing shows that the beleaguered Deutsche Bank turned over to the plaintiffs’ attorneys “more than 350,000 pages of documents and 75 audio tapes” that implicate other banks in a very serious way. In addition to banks previously named in the lawsuit (Deutsche Bank, HSBC, The Bank of Nova Scotia and UBS), trader conversations captured in the material provided by Deutsche Bank seriously implicate Barclays, Standard Chartered, BNP Paribas Fortis and Bank of America/Merrill Lynch.

According to yesterday’s filing, a trader conversation on June 8, 2011 went like this:

UBS [Trader A]: im gonna sell a lil more we need to grow our mafia a lil get a third position involved

“This coordinated manipulative conduct was intended to capitalize on the zero-sum nature of derivatives trading, including in COMEX silver futures contracts, and to extract illicit profits for Defendants from Plaintiffs and other Class members who held the opposite position. For example, as one UBS trader commented while planning a series of manipulative silver transactions with Deutsche Bank on April 1, 2011, ‘if we are correct and do it together, we screw other people harder.’ Thus, Defendants knew any profit resulting from their illegitimate trading activity flowed directly from harm caused to Plaintiffs and the Class.”

Numerous trader conversations confirming the sharing of insider information among traders at global banks were provided to the court yesterday, including the following between traders at Barclays and Deutsche Bank on April 6, 2011 — where one trader suggests the collusion amounts to “one team one dream.”

Barclays [Trader A]: you are short right

Barclays [Trader B]: we are one team one dream

The plaintiffs charge the banks with “(1) conspiring to execute large transactions when they knew the silver market was illiquid; (2) uneconomically buying silver to provide artificial support for prices at an agreed-upon level; (3) placing false ‘spoof’ bids and offers to create the false impression of supply and demand where none existed; and (4) withholding pricing information from the silver market by entering secret, unreported transactions with other cartel members.”

UBS and Deutsche Bank are charged by the plaintiffs with implementing an 11 o’clock rule, “whereby they would short silver at the same time each day” and  “use a countdown sequence—‘3 2 1 boom’—to ensure their manipulative transactions were entered at the same time.”

The lawsuit leaves open the possibility that other global banks may be named. The lawyers write that “Jane Doe Defendants Nos. 1-100 are other entities or persons, including banks, interdealer brokers, cash brokers and other co-conspirators whose identities are currently unknown to Plaintiffs. The Jane Doe Defendants participated in, furthered, and/or combined, conspired, aided and abetted, or agreed with others to perform the unlawful acts alleged herein.”

The case is In re: London Silver Fixing, Ltd., Antitrust Litigation in the U.S. District Court for the Southern District of New York, case number: 1:14-md-02573

The scorching evidence produced in the case raises the question, why is the U.S. Justice Department sitting on its hands in this matter. Unlike civil cases brought by private plaintiffs, the Justice Department has the power to wire tap and issue subpoenas. Almost two years ago, Bloomberg News reported that the Justice Department “is investigating whether the world’s biggest banks manipulated prices of precious metals such as silver and gold as it pushes to wrap up probes into currency-rate rigging, according to people with knowledge of the matter.” The report said that 10 banks, including two of those named in this case, Barclays and Deutsche Bank, were being probed.

With the evidence filed yesterday, there is no longer any justification for the Justice Department to dawdle further. From Libor rigging, to currency exchange rigging, to precious metals, to the charges of stock market rigging made in the Michael Lewis book, Flash Boys, there is an overarching appearance that every market has been rigged against average investors. We need a Justice Department that will grab the reins to restore trust, transparency and honest dealing in U.S. markets.