New WikiLeaks Email: Podesta May Have Cost Democrats the Election With Push for Obama Legacy 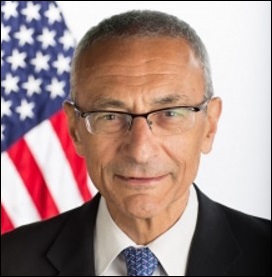 Yesterday, WikiLeaks released a new email that synthesizes why Hillary Clinton and the Democrats suffered such devastating losses in Tuesday’s election, losing states like Michigan, Wisconsin and Pennsylvania that should have been easy wins for the Democrats.

The email clarifies how Hillary Clinton’s Campaign Chairman, John Podesta, had created an impossible conflict in how he was running Clinton’s campaign: he wanted it to serve the dual role of embellishing President Obama’s legacy, thus muzzling Clinton on criticizing the President’s policies. It should have been readily clear that this was a losing gamble as tens of thousands turned out at Senator Bernie Sanders’ primary rallies as he called for a “political revolution” against the establishment in Washington while Clinton attracted modest crowds with her stay the course mantra.

The email shows that on October 7, 2015, Hillary Clinton’s advisers were working on an OpEd that would map out her position on needed reforms of Wall Street. The OpEd would come within a week of the first presidential primary debate where both Senator Bernie Sanders and former Maryland Governor Martin O’Malley were expected to endorse the reinstatement of the Glass-Steagall Act. The repeal of that 1933 legislation, sacked by President Bill Clinton and his pro-Wall Street administration in 1999, caused the Wall Street collapse and unprecedented bailout in 2008 by allowing banks holding trillions of dollars in taxpayer-backstopped insured deposits to gamble those funds away in exotic securities and derivatives. (See related articles below.)

In the email thread, Mandy Grunwald of Grunwald Communications said she liked the opinion piece “a lot” and made the following suggestions:

“1. I am concerned about the Glass Steagall paragraph. I would recommend  cutting it. Three things will antagonize: 1) saying she respects those who support it, is kind of patronizing; 2) calling it ‘old’ is an insult to the work done on the new version and 3) saying it will have unintended economic consequences will annoy.  Why not just skip this?

“2. On giving regulators the power to break up banks that are too big, can we say that there are several that are bigger than before the crisis and should be looked at right now?

“3. Can we lose the phrase ‘not just in the big banks’? This seems to denigrate the importance of the big banks when we don’t have to. Our point is just additive — these other financial institutions need to be held accountable too.”

Unlike Grunwald, who was focusing on substantive issues in the OpEd, John Podesta zeroed in on the lack of “love” for Obama in the piece, writing the following:

“I am worried that there is not enough love here for Obama. Implicitly critical. We are skating on thin ice after TPP, syria, Cadillac tax, immigration. Need to beef up credit.”

The next day, an OpEd under the byline of Hillary Clinton appeared at Bloomberg News. Obama’s name was mentioned four separate times in a highly favorable light. Clinton said Obama had signed into law “important new rules” after the 2008 financial crash; she was going to “build on the progress we’ve made under President Obama”; “thanks to President Obama’s leadership” the economy is now on “sounder footing”; and the Dodd-Frank financial reform legislation that Obama signed into law had “made important reforms, but there’s more to do.”

Since Bloomberg News is heavily read by people on Wall Street, this was a signal to them that Hillary Clinton would leave the bulk of her husband’s cash cow deregulation in place by following in the footsteps of Obama. What Obama’s administration had done in 2010 was to create the illusion of regulating Wall Street by proposing hundreds of vaguely worded rules in the Dodd-Frank legislation, then putting crony Wall Street regulators in charge at the SEC and U.S. Treasury to be sure the rules were never actually implemented in any meaningful way. (Under Dodd-Frank, the U.S. Treasury Secretary now sits atop a new financial stability body known as the Financial Stability Oversight Council. The crony Federal Reserve, which failed to see the crisis coming, was given enhanced supervisory powers over the largest Wall Street bank holding companies.) Obama even ignored one of his own rules in Dodd-Frank. It called for Obama to appoint a Vice Chairman for Supervision at the Federal Reserve to police Wall Street. It’s six years since the passage of Dodd-Frank; Obama has been called out time and again for failure to make this appointment; and yet he continues to thumb his nose at putting a real cop on the beat on Wall Street.

There is another telling fact in the email. Hillary Clinton seems to have had very little to do with actually fashioning her policies. Another Clinton adviser, Dan Schwerin, indicates that WJC (William Jefferson Clinton, i.e. Bill Clinton) had edited the OpEd with “further refinements from policy team,” but there is no mention that Hillary Clinton was involved in her own OpEd that would bear her byline.

On election day, November 8, WikiLeaks released another email from Podesta. This one suggested that not all of Clinton’s closest advisers shared Podesta’s views on showering love on Obama and embellishing his legacy. Podesta writes to Cheryl Mills, long tenured legal adviser to Clinton:

“You raised your eyebrows when I said I liked Obama and liked working with him. Think about that later today.”

Podesta has been a crucial cog in perpetuating the status quo at the top of the Democratic Party – what we call continuity government, that has created the worst wealth and income inequality in the nation since the late 1920s, by cowering before the money bosses on Wall Street.

Podesta served as White House Chief of Staff to President Bill Clinton; as Co-Chair of President Obama’s Transition Team in 2008, where he allowed Michael Froman, an executive of the insolvent Wall Street bank, Citigroup, to play a major role in cabinet and subcabinet appointments for Obama; as Counselor to Obama; and most recently as Chair of the Hillary Clinton campaign.