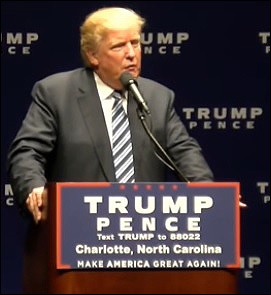 Donald Trump Speaking in Charlotte, North Carolina on October 26, 2016 Where He Endorsed Restoring the Glass-Steagall Act

Yesterday, CNBC announced that anonymous sources had told the cable business news outlet that Trump’s advisers were considering JPMorgan CEO Jamie Dimon for U.S. Treasury Secretary. The rumor nugget was quickly spread by other media outlets. The likelihood is that the rumor is coming from Jamie Dimon’s hyper-charged public relations machine rather than from Trump’s closest advisers.

Should Dimon get the nomination from Trump he would have to appear before the Senate Banking Committee for his confirmation hearing. He would be facing hostility from progressive Senate Democrats on the Committee like Senators Elizabeth Warren, Sherrod Brown and Jeff Merkley for overseeing a Wall Street mega bank that has garnered an unprecedented three felony counts from the U.S. Justice Department in just the past three years while Dimon took home massive pay and bonuses.

Two felony counts against the bank were for aiding and abetting the Bernie Madoff Ponzi scheme, the largest Wall Street fraud in U.S. history, while last year’s felony count on May 20 was for the bank’s involvement in rigging foreign currency markets. Dimon also presided over the scandalous London Whale episode at the bank in 2012 where the side of the bank holding insured deposits, Chase Bank, allowed its traders in London to gamble in exotic derivatives and lose at least $6.2 billion of those deposits – proving beyond any doubt the need to restore the Glass-Steagall Act and separate banks holding insured deposits backed by the taxpayer from the high risk gambles of Wall Street’s investment banks.

Dimon is also well aware of what happened to former Citigroup executive Jack Lew when he went before the Senate Banking Committee for his confirmation hearing to become the current Treasury Secretary. Republicans dug up the fact that Lew had received a $940,000 bonus from Citigroup while the bank was existing on a lifeline from the U.S. taxpayer. Lew’s participation in an investment in an offshore tax haven was dredged up as was his role in the division of Citigroup that blew up the bank. After the Senate Banking Committee got through with Lew, Senator Bernie Sanders ravaged him further on the floor of the U.S. Senate, stating in part:

“Mr. President, the next Treasury secretary will face enormous challenges. Let me give you a few examples of what I mean. The next Treasury Secretary will play a central role in regulating and overseeing Wall Street and large financial firms. Let us never forget: as a result of the greed, recklessness, and illegal behavior on Wall Street, millions of Americans lost their jobs, homes, life savings, and ability to send their kids to college.

Wall Street is also in a tizzy over whether Donald Trump will make good on his promise to restore a 21st Century version of the Glass-Steagall Act which would ban banks dealing in and underwriting securities from also owning commercial banks holding taxpayer-backed insured deposits.

“The Dodd-Frank law, the Democrats’ legislative Godzilla, is crushing small and community banks and other lenders…We support reinstating the Glass-Steagall Act of 1933 which prohibits commercial banks from engaging in high-risk investment.”

On October 26 of this year, speaking at a rally in Charlotte, North Carolina, Donald Trump personally echoed the pledge in the party platform, stating:

“The policies of the Clintons brought us the financial recession — through lifting Glass-Steagall, pushing subprime lending, and blocking reforms to Fannie and Freddie. Two friendly names but they’re not so friendly. It’s time for a 21st century Glass-Steagall and, as part of that, a priority on helping African-American businesses get the credit they need.” (See video clips below.)

That view was backed up the following day when one of Trump’s advisers, Wilbur Ross, appeared on Fox News. Ross had this to say under questioning from Maria Bartiromo:

“Well, our feeling is that it isn’t so much that the banks are too big. It’s that they’re too complex — too connected and too complex internally. Think about what you have to know to run a big bank. You’ve gotta have every geography in the world; every kind of obscure complicated product in the world in the derivatives market. That’s an awful big menu for anybody to absorb. We think it might be better for the banks to stick to lending, and instead of making more restrictions on lending, make it easier for them to make loans.”

What Ross failed to mention is Wall Street’s main motive for repealing the Glass-Steagall Act, which occurred in 1999 during the Bill Clinton presidency. Wall Street can use OPM – other people’s money, the life savings of the little guy sitting in low-earning deposit accounts – to make high-risk gambles for the bank. If the bets pay off, Jamie Dimon and his fellow Wall Street CEOs become billionaires over time. If the bets blow up the bank, as we saw at Citigroup after its CEO Sandy Weill became a billionaire from obscene bonuses and stock options, the taxpayers are forced to bail out the bank to prevent a banking panic and a run on every big bank in the country. Restoring the Glass-Steagall Act is simply about ending heads we win, tails you lose on Wall Street.