Election 2016: The World Was Watching – With Disgust 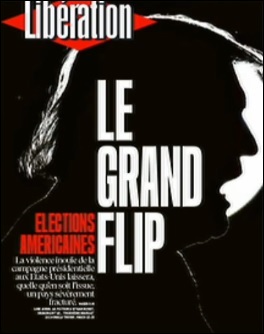 As election day arrived in the U.S. yesterday, European newspapers signaled their grave concerns over a presidential election that has left them stunned and anxious. The French newspaper, Aujourd’hui En France, used its front page to question whether the American dream (Le Reve) even still exists in the U.S. The French Liberation publication featured a silhouette of Donald Trump’s face on its front cover with the prophetic bold headline, “Le Grande Flip.”

The day before the election, Jonathan Freedland wrote in the U.K.’s Guardian newspaper:

“…one thing will certainly be over – and that is the dizzying, sometimes nauseating, 18-month-long saga that has been the 2016 campaign….In 2012, the Guardian’s front-page story branded the battle of Barack Obama v Mitt Romney ‘one of the most closely fought and polarised in recent history’. Looking back, that race looks like a veritable philosophy seminar, exemplary in its civility and decorum, compared with this one.”

Arthur Goldhammer had thoughts about Tocqueville and Davy Crockett in Le Monde Diplomatique:

“ ‘A presidential election in the United States may be looked upon as a time of national crisis,’ Tocqueville wrote. ‘As the election draws near, intrigues intensify, and agitation increases and spreads. The citizens divide into several camps, each behind its candidate. A fever grips the entire nation. The election becomes the daily grist of the public papers, the subject of private conversations, the aim of all activity, the object of all thought, the sole interest of the moment.’

“To be sure, for all his prescience, the French visitor could hardly have foreseen the unique ‘agitation’ of the 2016 presidential election, although he was under no illusion that popular sovereignty posed any sort of bar to the election of the uncouth and uncultivated. After all, the voters of one congressional district had sent to the House of Representatives ‘a man with no education, who can barely read [and] lives in the woods.’ (The man was frontiersman and folk hero Davy Crockett.) Nor was Tocqueville unfamiliar with the pretensions of wealthy New Yorkers who resided in ‘marble palaces’ that turned out, on closer inspection, to be made of ‘whitewashed brick’ with ‘columns of painted wood’. Hence, neither the ersatz splendour of Trump Tower nor its principal inhabitant’s unfamiliarity with the US constitution or the Russian occupation of Crimea would have surprised him, although Donald Trump’s nomination as the presidential candidate of a major political party would surely have shocked him even more than Crockett’s election to Congress. A democratic people might not always choose its leaders wisely, but the quality of its choices would surely improve, Tocqueville believed, as education was democratised and ‘enlightenment’ spread. Perhaps he was too optimistic.”

Writing about the first presidential debate between Donald Trump and Hillary Clinton in September, the U.K. Telegraph’s Tim Stanley noted:

“Do not assume that America is a country where politicians battle over ideas in a neutral marketplace with an objective, largely centrist audience choosing between them. The well has been poisoned by TV. Increased partisanship means people are tuning in to see characters they already hate get eviscerated, not arguments well made.”

On Germany’s Deutsche Welle digital front page today, Michael Knigge has a savage assessment of what the Trump victory means for America. He writes:

Ireland’s Independent newspaper was worrying about economic backlash from Trump, with writer Philip Ryan expressing this concern this morning:

“Mr Trump has used Ireland as an example of a foreign country taking advantage of US tax policy and stealing American jobs. It is safe to say Mr Trump will not be welcoming of the efforts of Enterprise Ireland and the Industrial Development Authority (IDA) to attract US business.

“The worst case scenario would see US tech and drugs firms who employ thousands of Irish workers decamp back to the states, the best would see a reduction in US foreign direct investment.”

Dutch foreign minister Bert Koenders was quoted on the front page of the digital DutchNews.nl stating that Trump will be “judged by his deeds.” In a short statement released by Koenders, he added “The American people have spoken.”

Both European and U.S. newspapers were writing this morning about the likelihood that Senator Bernie Sanders could have defeated Trump. (A Federal lawsuit has been filed by Sanders’ supporters against the Democratic National Committee and its former Chair, Debbie Wasserman Schultz, charging that they rigged the primary battle against Sanders in violation of the DNC Charter. Since the filing of the lawsuit, WikiLeaks has released emails showing that the current Interim Chair of the DNC, Donna Brazile, a contributor to CNN at the time of the emails, was feeding CNN debate questions to Clinton but not Sanders in advance of the primary debates.)

Andrew Buncombe writing this morning for the U.K.’s Independent revisited the excitement and passion of Sanders’ supporters versus the dull thud of expectations surrounding Clinton. Buncombe writes:

“At rallies for the 74-year-old across the country, there was a sense of euphoria and excitement that simply did not exist at those for Ms Clinton. Ms Clinton’s supporters said they had made a calculation to vote for her as they believed she would be the best candidate to lead the country, but there was no sense of the passion witnessed at her rivals events, or those of Barack Obama eight years earlier.

“But it was not just anecdotal evidence. A series of polls suggested that Mr Sanders — with his calls for free college tuition, the removal of student debt, a national health service and the removal of big money from politics — would stand a better chance against Mr Trump than Ms Clinton.

“Sanders would have bested the business billionaire in a landslide, while Clinton was projected to lose to Trump by at least two percent, according to polls conducted in May.”

Jesse Yomtov, writing for the U.S. newspaper, USA Today, notes this morning that “Sanders’ popularity among white working-class voters might have been the difference in this election; voters that Trump ultimately won. Sanders defeated Clinton in both the Wisconsin and Michigan primaries, two of the states that Trump surprised in on Tuesday.”

What the Wall Street Democrats and the DNC establishment ignored was that Americans wanted meaningful change – not more lip service from the Clinton dynasty that is shackled through labyrinth money ties to Wall Street. President Obama also overplayed his hand by encouraging Hillary Clinton to promise to deliver his third term when Americans were overflowing with seething anger at the status quo.

The question now is whether corporate media will continue its efforts to marginalize the non-Wall Street wing of the Democratic Party: voices like Sanders, Senators Elizabeth Warren, Sherrod Brown and Jeff Merkley. New York Times – we’re talking about you.