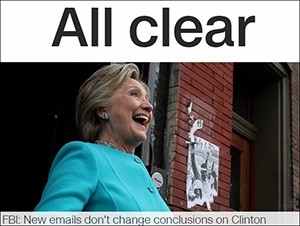 Yesterday, at 4:33 p.m., we checked at the digital front page of CNN to see how it was delivering the news that FBI Director James Comey had sent yet another letter to Congress (on a Sunday, no less). The letter indicated that the FBI had reviewed the additional emails from the private server of Hillary Clinton that were found on sext-addict Anthony Weiner’s laptop and that it had not changed its conclusions that Comey had expressed in his July statement. The July announcement from Comey found that Clinton had been “extremely careless” by transmitting information classified as Top Secret and Secret over a non secure server in the basement of her New York home while serving as Secretary of State in the Obama administration but that the investigation had concluded with no recommendation to charge her with any crime.

The statement that came from Comey yesterday, however, did not mention the ongoing, year-long criminal investigation into pay-to-play allegations against the Clinton Foundation where favors may have been given by Hillary Clinton’s State Department in exchange for large donations to the charity founded by Bill Clinton on which he continues to serve as a Director and where their daughter, Chelsea, serves as Vice Chair of the Board. That ongoing investigation has been reported by the Wall Street Journal and by CNN’s Senior Law Enforcement Analyst, Tom Fuentes. Despite this, CNN ran a big, bold headline yesterday — “All Clear” – to  erroneously send voters in tomorrow’s presidential election the signal that it’s clear-sailing for Clinton at the FBI.

The “extremely careless” charge Comey had leveled at Clinton in July hardly captured the gist of the situation. Dozens of individuals without security clearance – lawyers, a maid, computer maintenance workers at Platte River Networks and Datto, Inc. and even Anthony Weiner, the disgraced husband of Clinton aide Huma Abedin who is under a criminal FBI investigation for sexting an underage girl, all had access to Hillary Clinton’s classified emails. Why was that so dangerous to U.S. security interests? The Associated Press reported in June that when the State Department released batches of Clinton’s emails to the public with notations to explain why some material was redacted, “at least 47 of the emails contain the notation ‘B3 CIA PERS/ORG,’ indicating that the redacted text referred to CIA personnel or matters related to the agency.” This designation would strongly suggest that Clinton may have revealed CIA assets and/or identities over a non-secure server and to individuals lacking security clearance, potentially putting lives at risk.

Late last night, WikiLeaks released another trove of over 8,000 emails, some showing the invisible hands of the Democratic National Committee interacting with CNN to frame the narrative supporting Clinton.

CNN had already been shamed into firing DNC Interim Chair, Donna Brazile, after two separate WikiLeaks email releases indicated she had fed CNN debate questions to Hillary Clinton’s campaign team in advance of two CNN primary debates. Brazile at the time was functioning in the highly conflicted role as a CNN contributor as well as Vice Chair of the DNC. (The DNC has been sued in Federal Court by Sanders’ supporters for violating its own Charter which demands that it treat all primary candidates without bias.)

Last night’s WikiLeaks’ email releases show a further untoward coziness between CNN and the DNC. On April 28, 2016, DNC researcher Lauren Dillon wrote to her colleagues that CNN was looking for questions to ask Ted Cruz during an on-air appearance. The email notes:

“CNN is looking for questions. Please send some topical/interesting ones. Maybe a couple on Fiorina. Someone please take point and send them all together by 3pm. Thank you!”

A few days earlier, Dillon had written to her colleagues in an email that bore a subject heading “Re: Trump Questions for CNN.” The colleagues had submitted a long list of questions for CNN’s Wolf Blitzer to pose to Donald Trump in an interview ahead of his foreign policy speech. The interview was cancelled but Dillon wrote the following to the staff at the DNC that had provided the questions:

“CNN said the interview was cancelled as of now but will keep the questions for the next one.”

A news program allowing one highly partisan organization to submit its interview questions for the opposing candidate, without ever revealing this deception to its audience, would be grounds for immediate dismissal of those involved if the U.S. had not thoroughly lost its way in the realm of corporate-owned media.

Prior to the WikiLeaks emails, an individual using the name Guccifer 2.0 took credit for a separate hack of the DNC server. One of the documents from the hack shows that even after Bernie Sanders had entered the primary race, the DNC was writing confidential memos on how it could advance Hillary Clinton to the lead in the presidential race. The memorandum, marked “Confidential,” calls for the following tactics: “Our goals in the coming months will be to frame the Republican field and the eventual nominee early and to provide a contrast between the GOP field and HRC… muddy the waters around ethics, transparency and campaign finance attacks on HRC…”

The memorandum further indicates that the DNC should “utilize reporters” and create stories in the media “with no fingerprints.” Had it not been for WikiLeaks, the DNC and the Clinton campaign would have walked away without a trace of fingerprints on what is now the most disgraceful U.S. presidential election in the modern era, if not in history.

For those Americans paying close attention, this presidential election is no longer about Clinton or Trump. It’s about a completely corrupt campaign finance system, entrenched crony capitalism, and a corporate media that is now pimping itself out.

If one needed further proof, the biggest bombshells coming out of the WikiLeaks email releases are a series of emails from 2008 showing that Michael Froman, an executive at then insolvent and serially fined Wall Street bank, Citigroup, was in charge of providing President Obama with his slate of cabinet and subcabinet heads. Wall Street On Parade wrote two in-depth reports on what Froman was doing behind the curtain for the candidate who promised “hope” and “change” to the American people. The New York Times buried this bombshell 19 paragraphs down in an unrelated story that appeared in print 15 pages away from its front page.