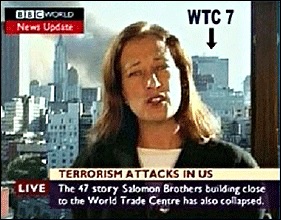 BBC Correspondent Jane Standley Reported the Destruction of WTC 7 Before It Collapsed – Even Though the Building Could Be Seen Behind Her.(Photo Courtesy of Architects and Engineers for 9/11 Truth.)

This Sunday will mark the 15th anniversary of the 9/11 tragedy – one of those seminal events in human memory that is seared forever on the brain. Because of the emotional toll 9/11 took on the human psyche — watching U.S. commercial airline planes converted to killing machines on U.S. soil — America’s collective memory of exactly what happened on 9/11 has more to do with repetitive TV clips of the Twin Towers collapsing and a rush to war than specific details of the actions of those pulling the monetary levers on Wall Street.

The day’s events were so bizarre and triggered such cognitive dissonance that millions of Americans did not realize for years that a third World Trade Center skyscraper had collapsed in lower Manhattan that day. World Trade Center Building 7, a 47-story skyscraper not hit by a plane, collapsed at 5:20 p.m. on 9/11 in an almost identical fashion as World Trade Centers One and Two had collapsed in the morning. The organization, Architects and Engineers for 9/11 Truth, which consists of more than 2,000 licensed architects and engineers, do not believe the official version of how these buildings collapsed and have signed a petition calling for a new, independent investigation of 9/11 by a body with full subpoena power.

This is the first time we are writing about 9/11 in any detail. Our small town of Garden City, Long Island, New York, where we lived at the time, was heavily impacted. The memories are painful. Long Island as a whole experienced almost 500 deaths out of the almost 3,000 who died on 9/11. Our next door neighbor, a wonderful husband and father to two young sons, lost his life that day. We stood by a colleague at work watching the news unfold on TV on the morning of 9/11 and painfully remember his dash to race home to his family. His brother worked for Cantor Fitzgerald, a Wall Street firm that lost 658 of its 960 employees that day, including his young brother.

What has been lost in the emotional toll of that day is the reality that the massive bailout by the Federal Reserve of Wall Street in 2008, had its test run on 9/11. We know a great deal about the $13 trillion that the Fed secretly infused into Wall Street banks and foreign banks in cumulative loans from 2007 through 2010 because Bloomberg News battled in court for years to unleash the information from the iron grip of the Fed. The public knows much less about the massive Fed bailout during 9/11 and Fed Chair Alan Greenspan, according to a transcript from a teleconference after 9/11, demanded that those in the know at the Fed coordinate any public comments with the Fed before making them.

What few Americans remember is that the stock market was in terrible shape prior to 9/11 because of corrupt analyst research practices on Wall Street. The Nasdaq had closed at 1695 on the day before 9/11 – a stunning 66 percent drop from its peak in March of 2000. The dot.com bust had led to one of the largest destructions of U.S. wealth in stock market history. The U.S. economy was also in a swoon as a result.

The New York Times’ Ron Chernow wrote about the abysmal state of Wall Street six months before 9/11: “Let us be clear about the magnitude of the Nasdaq collapse. The tumble has been so steep and so bloody — close to $4 trillion in market value erased in one year — that it amounts to nearly four times the carnage recorded in the October 1987 crash.” Chernow compared the Nasdaq to a “lunatic control tower that directed most incoming planes to a bustling, congested airport known as the New Economy while another, depressed airport, the Old Economy, stagnated with empty runways. The market functioned as a vast, erratic mechanism for misallocating capital across America,” wrote Chernow.

The Federal Open Market Committee (FOMC) minutes of August 21, 2001, just a few weeks before 9/11, confirm the sorry state of both the economy and the stock market as follows:

“Business spending on equipment and software declined substantially in the second quarter after falling somewhat in the preceding two quarters…orders data for June were extraordinarily weak, led by a steep decline in communications equipment. Those data, as well as numerous anecdotal reports, suggested further weakness in spending for equipment and software going forward. Nonresidential construction, which had held up well in the first quarter, was down substantially in the second quarter, as spending for office, industrial, and lodging facilities contracted sharply. Vacancy rates, particularly in high-tech centers, had increased significantly in recent months, as demand for office space and data centers plunged…

“A spate of weak second-quarter earnings reports and sizable reductions in analysts’ earnings projections for the remainder of the year took a toll on equity markets, however, and broad stock market indexes moved down appreciably over the intermeeting interval…”

The 9/11 tragedy gave the Fed the freedom to crank enormous sums of liquidity into Wall Street within just a few days. Its minutes and transcripts show the following:

On September 12, 2001, the FOMC voted unanimously to establish a $50 billion swap line with the European Central Bank;

On September 14, 2001, the FOMC voted to establish a $30 billion swap line with the Bank of England;

On Monday morning, September 17, 2001 – prior to the opening of the New York Stock Exchange for the first time since it closed on 9/11, the Federal Reserve announced it was cutting its Fed Funds Rate and Discount Rate by 50 basis points (one-half of one percent), giving Wall Street a windfall in lowered borrowing costs. Over the next three months, the Fed would cut its benchmark Fed Funds rate by another 125 basis points.

In a teleconference meeting by the FOMC on September 13, 2001, just two days after 9/11, Jerry Jordan, President of the Federal Reserve Bank of Cleveland at the time, gave this description of the $100 billion the Fed had thus far pumped into Wall Street:

JORDAN. “Mr. Chairman, this is Jerry Jordan in Cleveland. As we demonstrated yesterday, our ability to inject liquidity into the system as needed is very, very large. It appears to me — with the combination of discount window borrowing yesterday, RPs, overnight overdrafts, and the Fed float — that we’ve added about $100 billion worth of liquidity. So it would be hard to imagine the availability of liquidity as an issue. And for the sophisticated people in the financial industry, I think that has already had a very calming effect.”

At another teleconference call on the morning of September 17, Fed Chair Greenspan effectively warned the Fed governors to keep a lid on how much they shared with the public. According to the transcript of the call, Greenspan stated:

GREENSPAN: For the time being, all of our remarks should be coordinated and made as official statements of the Federal Open Market Committee. As a consequence, when you are out talking — as indeed I think you obviously have to be — there is no reason why you cannot discuss what we have in fact done in areas such as the payments system and the swap lines. We can discuss issues relating to the effects of this disruption, including the bulging of the Federal Reserve’s balance sheet and the ultimate expectation that within a reasonably short period of time it will converge back to normal, as well as other issues of that nature. I would stay away from commenting on what we did just now and I would refrain from speculating about the American economy. There is no way to discuss the outlook for the American economy without discussing monetary policy or implying in somewhat precise form what the options may be…If there are any statements coming out of the Federal Reserve, we have to make certain that they are coordinated and that we all effectively agree on the statements that we make.”

In the same call, William J. McDonough, President of the New York Fed which is headquartered just blocks from the New York Stock Exchange, explained what else was being done to rally spirits on Wall Street: “we have the building wrapped in bunting, we have a big flag flying, and we’re playing patriotic music from the parapet.”

When I returned to work after 9/11, there were American flag lapel pins for every employee placed by an unseen hand on our desks. But flags and patriotic music blaring from the parapets is not the same thing as truth and facts.

The families of the victims, the public, the architects and engineers who have thoroughly discredited the official story, and all of us who are repulsed by watching Wall Street bailed out of its crimes, time after time, deserve facts from a truly independent commission with meaningful subpoena power.