Official 9/11 Narrative Will Be Challenged at Manhattan Symposium

Fifteen years after 9/11, an expanding international body of scientific researchers and legal experts continue to challenge the official narrative of 9/11. They will host a two-day symposium this Saturday and Sunday in the historic Great Hall of Cooper Union in New York City to present the science-based evidence they have compiled.

Tickets will be available at this site for a limited period of time. (See the two-day program and lineup of speakers here, here and here.)

Saturday’s program will include a presentation by Dr. J. Leroy Hulsey on the preliminary findings of a computer modeling study of the collapse of World Trade Center Building 7, a 47-story skyscraper in lower Manhattan that was not hit by a plane but collapsed to the ground within seconds at 5:20 p.m. on the afternoon of 9/11. The study is being conducted at the University of Alaska Fairbanks (UAF) using finite element modeling. Dr. Hulsey is the Chair of UAF’s Civil and Environmental Engineering Department. He is being assisted by two Ph.D. research assistants. (See video below.)

One of the special guest speakers at the symposium will be Bob McIlvaine, a retired school teacher from the Philadelphia area. McIlvaine’s son, Robert Jr., worked for Merrill Lynch and perished on 9/11. Robert Jr. was among the many to die on the 106th floor of the North Tower where a conference had attracted attendees from across Wall Street that morning. Bob McIlvaine is one of the few family members of 9/11 victims who has openly challenged the official narrative for many years.

Also speaking at the symposium will be Richard Gage, AIA, a San Francisco Bay Area architect of 25 years, a member of the American Institute of Architects, and the founder and CEO of Architects & Engineers for 9/11 Truth (AE911Truth.org), a nonprofit that includes more than 2,000 licensed architects and engineers who have signed a petition calling for a new, independent investigation, with full subpoena power, into the destruction of the Twin Towers and Building 7.

The Master of Ceremonies for the first day of the symposium will be Mark Crispin Miller, Professor of Media, Culture and Communication at New York University, and a noted author and speaker. Master of Ceremonies for day two of the symposium will be William Pepper, a barrister from the United Kingdom who is engaged in Human Rights Law, for a time convening the International Human Rights Seminar at Oxford University. 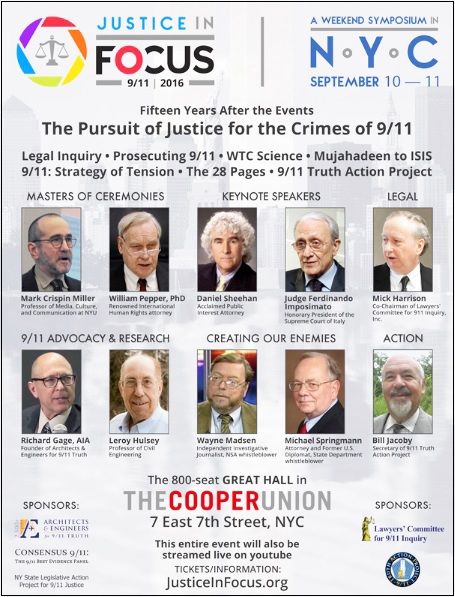