The Next President of the United States and the Economy 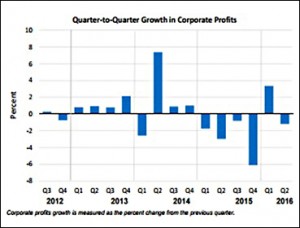 Wall Street was determined that a Democratic Socialist like Senator Bernie Sanders would never occupy the Oval Office. In hindsight, Wall Street may come to seriously regret that it and a full blown conspiracy at the Democratic National Committee blocked the ascendancy of one of the most popular and trusted presidential candidates in a generation.

Trust and confidence are essential ingredients for a healthy stock market and U.S. economy. According to the Bureau of Economic Analysis, U.S. consumers spent over $12 trillion last year “on all kinds of stuff, including new cars, furniture, clothes, groceries, beauty products, electronics, visits to doctors and dentists, and tickets to sporting events and movies.” The total U.S. GDP for 2015 was $17.947 trillion. That makes the consumer the Decider in Chief of what happens in the U.S. The consumer’s willingness to spend represented 66.86 percent of total GDP last year.

But dark forces prevailed and “the people” have ended up with two presidential candidates with the lowest approval ratings in memory. According to a Washington Post-ABC News Poll taken between August 24-28, 2016, 56 percent of Americans have an unfavorable opinion of Hillary Clinton. The Washington Post notes for good measure that this is “the worst image Clinton has had in her quarter-century in national public life.” Donald Trump weighs in with an unfavorable opinion by 63 percent of Americans. If you look at just registered voters, according to the poll, Clinton and Trump are running almost neck and neck with an unfavorable rating of 59 percent for Clinton and 60 percent for Trump.

Unlike Sanders, who has enjoyed a scandal-free quarter century in the House and Senate, both Clinton and Trump have citizens walking on pins and needles waiting for the next scandal to unfold and bring further disgrace to the country.

The worry among Americans that the unbridled tongue of a President Trump could sack U.S. relations with its allies and trading partners is getting a test pilot rollout in the form of Philippine President Rodrigo Duterte. According to the Guardian newspaper, Duterte has recently called President Obama “the son of a whore,” labeled the U.S. ambassador to Manila a “gay son of a whore,” and told the Catholic Church, “don’t f*** with me.” The Philippine stock market has responded in kind by selling off as foreign investors yank their money.

Trump’s refusal to release his tax returns has also cast a pall over his campaign as Americans worry that his presidency would be dogged with financial scandals and conflicts of interest.

The ubiquitous scandals swirling around Hillary Clinton have Americans equally on edge. And they can be multiplied by a factor of two since both Hillary and Bill Clinton will inhabit the White House if she is elected President. The Associated Press moved the scandal meter into the red zone on August 23 with an investigative report on the Clinton Foundation, a charity set up by the Clintons. The report found that: “At least 85 of 154 people from private interests who met or had phone conversations scheduled with Clinton while she led the State Department donated to her family charity or pledged commitments to its international programs, according to a review of State Department calendars released so far to The Associated Press. Combined, the 85 donors contributed as much as $156 million. At least 40 donated more than $100,000 each, and 20 gave more than $1 million.”

The article portrayed a pay-to-play operation on steroids. The Associated Press had to go to Federal court to get the State Department to release Clinton’s detailed daily schedules and now the State Department is saying it will not release the other half of these records until after the election. (This Federal agency is starting to sound like it’s putting its finger on the scale for Clinton similar to what happened at the Democratic National Committee.) Based on what it has obtained so far, the AP concluded that “more than half the people outside the government who met or spoke by telephone with Clinton during her tenure as a Cabinet secretary had given money – either personally or through companies or groups – to the Clinton Foundation. The AP’s analysis focused on people with private interests and excluded her meetings or calls with U.S. federal employees or foreign government representatives.”

Can either of these candidates rally confidence and trust in a nation where S&P 500 profits have declined year-over-year for five consecutive quarters. Where overall corporate profits have declined by 4.9 percent over the last four quarters, according to the Bureau of Economic Analysis. Where most Americans feel the fix is in and no matter how hard they work, they’re never going to get a fair deal under either of these candidates in the Oval Office.

Senator Bernie Sanders uniquely understood what is ailing America after the greatest financial collapse since the Great Depression — brought on by new-age Wall Street robber barons in 2008. Sanders set up a special web page to describe his brand of Democratic Socialism, comparing what he sees today to what Franklin Delano Roosevelt saw when he took office in the 1930s: millions “denied the basic necessities of life”; families living on “incomes so meager that the pall of family disaster hung over them day by day”; “millions lacking the means to buy the products they needed and by their poverty and lack of disposable income denying employment to many other millions.”

Sanders further points out that almost everything FDR proposed was called “socialist” at the time. He writes:

“Social Security, which transformed life for the elderly in this country was ‘socialist.’ The concept of the ‘minimum wage’ was seen as a radical intrusion into the marketplace and was described as ‘socialist.’ Unemployment insurance, abolishing child labor, the 40-hour work week, collective bargaining, strong banking regulations, deposit insurance, and job programs that put millions of people to work were all described, in one way or another, as ‘socialist.’ Yet, these programs have become the fabric of our nation and the foundation of the middle class.”

The reality was that FDR put the policies in place to allow a more humane form of capitalism to succeed in America. Those restraints are desperately needed again today.

What does it say about the American system of elections when a voice of substance and reason like that of Senator Bernie Sanders can be kicked to the curb while two deeply discredited and disliked candidates enter the last leg of the campaign for the highest office in the land?