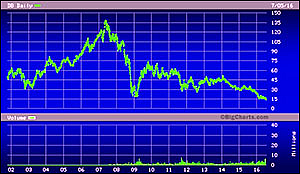 Yesterday, Wall Street mega bank, JPMorgan Chase, was the biggest percentage decliner in the Dow Jones Industrial Average, losing 2.79 percent. Goldman Sachs, another Dow stock, was third in line after Caterpillar, losing 2.56 percent. But that performance was absolutely mild compared to how other global bank stocks that aren’t in the Dow performed.

Morgan Stanley lost 3.55 percent; Citigroup shed 3.30 percent; while Deutsche Bank, a German bank heavily interconnected with Wall Street banks, that trades on the New York Stock Exchange, touched $13.34 intraday – its lowest share price in more than 30 years. Deutsche Bank closed the day at $13.40, down 3.67 percent. A U.S. unit of Deutsche Bank, which is designated a global systemically important bank (G-SIB), recently failed its stress test according to the Federal Reserve.

Wall Street’s global banks have now resumed a selloff that was setting off risk alarms in February.  Back then, banks were tanking as crude oil sold off and worries of banks’ bad debts in the oil sector weighed on investor confidence. Lately, banks are tanking along with the pound, the U.K. currency, which is also setting 30-year lows against the U.S. dollar.

What has become a continuing concern among asset managers after the Brexit vote is how U.K. banks and businesses are going to be able to pay back the almost $1 trillion they owe to U.S. banks for loans, derivatives, and guarantees. As the pound continues to tumble against the U.S. dollar, those loans become ever more expensive to pay back, raising the fear of increasing loan loss reserves at U.S. banks or outright bad debt write-offs.

As proof that the Brexit vote is producing negative sentiment as to the safety and soundness of the big banks, on the two trading days after the vote was tallied in favor of the U.K. leaving the European Union (Brexit), Friday, June 24 and Monday, June 27, global banks began hemorrhaging capital. Over the two-day trading span, Citigroup lost $17.55 billion in equity capital as its share price dropped 13.45 percent. Morgan Stanley lost $7.13 billion of its equity market capital in the two-day trading period while Bank of America slumped a stunning $19.11 billion. Every major Wall Street bank was battered.

If the trend continues, investors can likely expect to see a quiet announcement that JPMorgan Chase and Goldman Sachs will be replaced in the Dow Jones Industrial Average by two different companies (with better prospects going forward). That doesn’t mean the U.S. economy will have better prospects – just the illusion cast by the Dow.

The fear about the global banks is also driving the 10-year U.S. Treasury note to all-time record lows as a safe haven play. As of early this morning, it’s trading to yield 1.35 percent after hitting a new low yesterday. Treasury yields during the Great Depression were significantly higher than today, which should warrant a serious dialogue on what the Federal Reserve’s experiments in quantitative easing and reinvestment of principal on a $4.5 trillion Fed balance sheet has done to monetary policy and the safety and soundness of the handful of behemoth banks that constitute the core of the U.S. financial system.