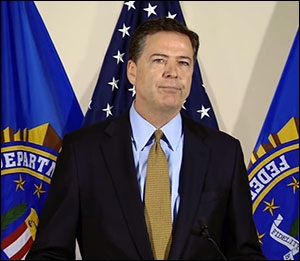 Republicans have offered Americans a non viable presumptive candidate for President. Democrat elites are offering their continuing model of failing up.

Failing up has become the hallmark of the Obama administration. Help crash the biggest bank in the country and take a bonus for yourself from the taxpayer bailout and you fail up as U.S. Treasury Secretary. Work as the lawyer for the Wall Street banks that crashed the U.S. economy and you fail up as Chair of the Securities and Exchange Commission. Become a partner at the law firm named in an historic court decision as a co-conspirator with Big Tobacco and you end up as the head of the Justice Department or the head of its criminal division. Fail to rein in systemic Wall Street abuses before they crash the U.S. economy in the greatest downturn since the Great Depression and the President will bestow even greater regulatory powers on you under the Dodd-Frank financial reform legislation.

Now President Obama is going on the stump to make sure his former Secretary of State, Hillary Clinton, has the ultimate experience in failing up – all the way to the Oval Office. As President Obama was preparing to escort Hillary Clinton to a presidential campaign event yesterday on Air Force One, the Director of the FBI, James Comey, held a press conference to call her handling of Top Secret national security matters “extremely careless” and contradicted her serially false statements to the public about the matter.

The material in the FBI report was so damaging that one has to question if U.S. intelligence personnel would, or should, share Top Secret information in the future with Hillary Clinton should she become Commander in Chief.

Two scathing reports have now been issued by separate investigators into Democratic Presidential candidate Hillary Clinton’s handling of classified national security matters over a non-government, private computer server located in the basement of her home. The first was issued by the State Department’s Inspector General at the end of May. It found that Clinton had told multiple untruths in the matter. The second report followed a criminal investigation and was delivered verbally yesterday by FBI Director James Comey. It also eviscerated multiple falsehoods Clinton has told the American people for more than a year.

The FBI Director indicated yesterday that his agency’s many months of investigation proved that statement by Clinton to be false. Comey stated at his 11:00 a.m. press conference that out of the 30,000 emails that Clinton handed over to the State Department from her private server, the following were classified:

When a government worker with security clearance transmits material carrying a classified designation over a non-secure server, it should provide ample grounds for prosecution or, at the very least, a ban from future Federal government work. Comey said that his recommendation to the Justice Department would be “that no charges are appropriate in this case,” because he couldn’t find willful intent to engage in wrongdoing.

Clinton has also repeatedly indicated that she carefully went through her emails and sent all of her work-related emails to the State Department as they requested, while destroying her personal emails.

Comey threw cold water on that assertion as well, stating yesterday that “The FBI also discovered several thousand work-related emails that were not among the group of 30,000 emails returned by Secretary Clinton to State in 2014.”

Then there were Clinton’s repeated false statements about receiving approval to conduct her email messaging over a private server in her home. That assertion was shredded in a blistering analysis from the State Department’s Inspector General. In the video of her press conference of March 10, 2015, Clinton opened the subject of the private server with this statement:

“When I got to work as Secretary of State, I opted for convenience to use my personal email account, which was allowed by the State Department.”

Before the video concludes, the former Secretary of State repeats two more times that she had approval for use of the private server. But the Inspector General found that Clinton had never sought permission and her request would have been rejected if she had. The report noted:

As a result of Hillary Clinton and her staff going rogue with this email server, FBI Director Comey concluded yesterday at his press conference:

“We do assess that hostile actors gained access to the private commercial email accounts of people with whom Secretary Clinton was in regular contact from her personal account.”

And the FBI report left open the possibility that emails were destroyed by her that might have damaged Clinton further. Comey stated:

“It is also likely that there are other work-related e-mails that they did not produce to State and that we did not find elsewhere, and that are now gone because they deleted all emails they did not return to State, and the lawyers cleaned their devices in such a way as to preclude complete forensic recovery.”

Ask yourself this simple question: what message does it send to the young people of America when reckless, incompetent behavior qualifies one for the highest office in the land.