Is Frexit Next? Why Do So Many Europeans Dislike the EU? 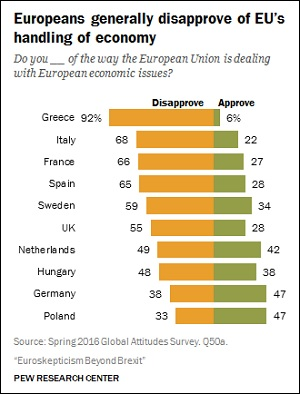 On June 23 the U.K. will hold a referendum to decide whether to exit the European Union, a vote dubbed Brexit. Debate on the vote has served to harden views, either favorably or unfavorably, across Europe.

This week, the Pew Research Center released a survey which found that 61 percent of the French hold an unfavorable view of the EU, leading to speculation that there may be demands for a referendum (Frexit) in France to seek a vote on leaving the EU.  In fact, a French presidential candidate, Bruno Le Maire, wrote recently in the French publication, Le Monde, that if elected president, he would support holding a referendum vote on the issue.

The Pew Research Center study, as well as corporate media, have focused the growing resentment of the EU on its handling of economic and refugee issues. The Pew study found that overwhelming majorities in every country studied disapprove of how the EU has dealt with the refugee issue. The refugee related disapproval ranged from a high of 94 percent among Greeks, to 88 percent of Swedes, 77 percent of Italians, to 70 percent among the French. Majorities in the UK, Sweden, Spain, France, Italy, and Greece disapprove of the EU’s handling of the economy according to the Pew study.

But there is another simmering current of resentment that corporate media is not as eager to bring to the fore. It has as its foundation the same underpinnings that have sparked demands for a political revolution in the United States by Presidential contender Senator Bernie Sanders and the millions of Americans who are financially supporting his campaign with $27 donations. A growing number of Europeans believe the EU is a thinly disguised front for multinational corporations just as Americans believe that Wall Street and corporate cartels are the puppet master of the U.S. President and Congress.

A watchdog group, Corporate Europe Observatory, has played a key role in exposing how multinational corporations and their lobbyists control the agenda at the European Union. Based on their research, a film was released across Europe in 2012 titled “The Brussels Business.” The film documents how the European Round Table of Industrialists (ERT) sits in the wings, controlling the agenda of the EU. See the movie trailer here and the full movie here.

The Corporate Europe Observatory has also released a broad range of studies to back up its premise that corporate influence is out of control and sapping democracy across Europe, under the same yoke of bankers, corporate lobbyists and revolving doors that is sapping democracy in America. In a report released in February 2009 titled “Would You Bank On Them: Why We Shouldn’t Trust the EU’s Financial ‘Wise Men,’” the organization and other researchers looked at the group of eight experts that had been set up by the EU to advise it on how to reform the financial system. The body of experts was called the de Larosière Group after its Chairman, Jacques de Larosière, who had been the co-chair of the financial sector lobby organization, Eurofi, as well as an “adviser to the French bank BNP Paribas for a decade.”

The study’s findings echoed what happened in the U.S. where the Federal Reserve, which had failed to spot the impending 2008 crisis or strengthen regulations to prevent it, while Bank executives sat on its regional Boards of Directors, was given sweeping new powers under the Dodd-Frank financial reform legislation to supervise every major bank holding company in the United States, while simultaneously buying up their toxic waste and secretly funneling below-market-rate loans to the banks to prop them up.

The European study “Would You Bank on Them” found:

“… the de Larosière Group…is comprised of people closely linked to the financial industry, or to institutions that, to a greater or lesser extent, have been implicated in the crisis. Four members of the group are closely linked to giant financial corporations that have all played a major role in the current financial crisis, a fifth was the head of the UK Financial Services Authority that completely failed in its supervision of bust bank Northern Rock, a sixth is a fierce enemy of regulation and a seventh works for a company whose clients include major banks. Beyond this, some members of the Group failed to warn of the impending financial crisis and lately they have even played down its extent and severity. The majority have expressed strong support for a deregulated financial sector and can be deemed to have supported hard-line, neo-liberal policies that arguably created the financial crisis. They are the very kind of people who got us in to the mess.”

In addition to de Larosière, the other members were:

Two days ago, a new song on Brexit popped up on YouTube. (See video below.) One should give particular note to the references to President Obama, the United States and our two presumptive nominees for President.

Editor’s Note: At the end of this video there are a number of claims made regarding inventions by the British. We’re willing to concede the light bulb — but the telephone? Really?