A little noticed 2008 email from former Federal Reserve Chairman, Ben Bernanke, raises serious questions about his official narrative on the collapse of Lehman Brothers. We’ll get to the email in detail, but first some necessary background.

A lot of eyes rolled on Wall Street last October when Ben Bernanke, who chaired the Federal Reserve in the lead up to and during the financial collapse in 2008, released his memoir of the financial crisis with the title: “The Courage to Act: A Memoir of a Crisis and its Aftermath.” Many Wall Street observers felt the title would have more correctly captured the facts on the ground had it read: “The Lack of Fed Courage to Supervise Mega Banks Led to an Epic Collapse.” (In the leadup to the crisis, the Fed allowed Citigroup CEO Sandy Weill and JPMorgan Chase CEO, Jamie Dimon, to sit on the Board of its Federal Reserve Bank of New York, among numerous other conflicts of interest.)

Throughout his memoir, including Chapter 12 titled “Lehman: The Dam Breaks,” Bernanke goes to great pains to paint a portrait of the Fed and himself as being intensely on top of the situation at Lehman Brothers from March 2008 forward, following the Bear Stearns collapse and its absorption by JPMorgan Chase.

For example, Bernanke reveals that the Fed had placed bank examiners at Lehman Brothers, writing as follows:

“After JPMorgan Chase bought Bear, the New York Fed staff conferred frequently with the SEC and Lehman – up to three times per day. We would eventually send a small number of bank supervisors to Lehman and the other remaining investment banks.”

We also know that Bernanke was briefed in great detail on the Lehman situation by Fed economist Patrick M. Parkinson on July 20, 2008, almost two months before the Lehman bankruptcy, because Parkinson’s email was included among the thousands of pages of text and exhibits of the Financial Crisis Inquiry Commission Report, the official analysis of the crisis. In that email, Parkinson wrote:

“…Focusing for the moment on LB’s [Lehman Brothers] vulnerable tri-party borrowings, as of July 14 it was financing $200 billion of collateral. Of that amount, all but $12.8 billion was PDCF-eligible [PDCF was an emergency loan program set up by the Fed]. Of the non-PDCF-eligible, $8.7 billion was equities. JPMC [JPMorgan Chase], LB’s clearing bank, is likely to be the first to realize that the money funds and other investors that provide tri-party financing to LB are pulling back significantly. If some morning it fears that the investors are unlikely to roll their repos, it may threaten not to unwind LB’s previous night’s repos. If it did that, LB would be done because the tri-party investors would control its securities inventory. The investors presumably would promptly liquidate the $200 billion of collateral and there is a good chance that investors would lose confidence in the tri-party mechanism and pull back from funding other dealers. Fear of those consequences is, of course, why we facilitated Bear’s acquisition by JPMC. We could try to dissuade JPMC from refusing to unwind by pointing out that if the investors don’t roll the repos LB can borrow from us through the PDCF. Even if we did so, for two reasons JPMC might still balk. The first is the non-PDCF collateral. We could address that concern by making the equities and other non-PDCF collateral eligible. Or we could try to get LB to wire $12.8 billion of cash into JPMC to cover the rollover risk. The other reason is a fear that LB could be placed in bankruptcy intra-day, before the next day’s tri-party repos and any PDCF loans are settled, in which case JPMC would be stuck with $200 billion in secured loans to LB. I’m not sure that this is at all likely, but JPMC and BNYM [Bank of New York Mellon] are sufficiently concerned that they have arranged a meeting Monday afternoon with SIPC [Securities Investor Protection Corporation that insures brokerage accounts]. (LB’s PD [Primary Dealer] is a SIPC member (as are some but not all of the other PDs) and its bankruptcy would be administered by SIPC.) Board staff plan to sit in on this meeting. But even if we are willing to extend as much as $200 billion of financing to LB, absent an acquirer our action would not ensure LB’s survival…” [Information in [ ] brackets has been inserted by Wall Street On Parade.]

At this point, the Fed was focusing on Lehman’s tri-party borrowings. What it should have also been focusing on was Lehman’s interconnectedness through its derivatives book to every major bank and investment bank on Wall Street, whose market capitalizations imploded after Lehman collapsed.

According to email exhibits from the Financial Crisis Inquiry Commission, on September 9, 2008, Tim Geithner, then President of the Federal Reserve Bank of New York, was planning a telephone call with Bernanke at 3 p.m. that day. Geithner had requested that the staff of the New York Fed put together briefing materials showing how Lehman Brothers differed from Bear Stearns and how market fragility differed currently from the situation at the time of Bear’s demise in March 2008. One of the graphs attached to this thread of emails is a chart showing the massive counterparty exposure to Lehman Brothers by commercial banks that had engaged in over-the-counter derivative contracts with it. (See chart below.)

The column headed CCE means “Counterparty Credit Exposure” while the column titled MPE means “Maximum Peak Exposure,” or what the exposure could potentially balloon to at some future point in time. The column titled “Deal Counts” means how many separate contracts the counterparty would have to unwind and potentially have to replace if Lehman blew up. Just between Deutsche Bank, JPMorgan Chase, UBS, Morgan Stanley, Barclays, and Citibank, over 258,000 contracts would be impacted. (It’s becoming clearer why the Fed had to secretly funnel a cumulative $13 trillion in below-market-rate loans to both foreign and domestic banks before the crisis was over.)

All of this makes the email sent by Ben Bernanke to Federal Reserve Governor Kevin Warsh on September 14, 2008 extremely difficult to fathom. The email, from FCIC exhibits, reads:

“In case I am asked: How much capital injection would have been needed to keep LEH alive as a going concern? I gather $12B or so from the private guys together with Fed liquidity support was not enough.”

First is the question of why Bernanke was writing to Kevin Warsh instead of the President of the New York Fed, Tim Geithner, the Fed’s point man on Lehman. Warsh was in his 30s and a former investment banker at Morgan Stanley before becoming a White House aide under the administration of George W. Bush. He had been appointed as a Fed Governor in 2006 by President Bush.

In Bernanke’s book, he concedes that the potential buyers of Lehman had concluded that it was wildly inflating the value of its assets and capital by tens of billions of dollars. That’s why no firm would step up to the plate to buy it. How had the Fed’s own examiners missed this?

How could Bernanke have read Parkinson’s email about Lehman’s tri-party borrowing or looked at its derivative obligations and even contemplated that $12 billion in a capital injection was a realistic assessment of what it would take to keep Lehman alive.

All of this points to growing calls for the Federal Reserve to be completely severed from Wall Street bank supervision and get back to its core mission of monetary policy. It also points to the Fed’s current blinders when it comes to the dangerous interconnectedness that still exists today among Wall Street banks serving as each other’s counterparties to trillions of dollars in derivative contracts. 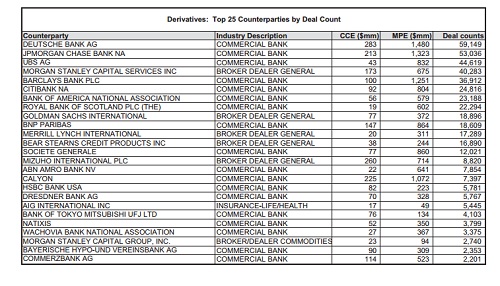