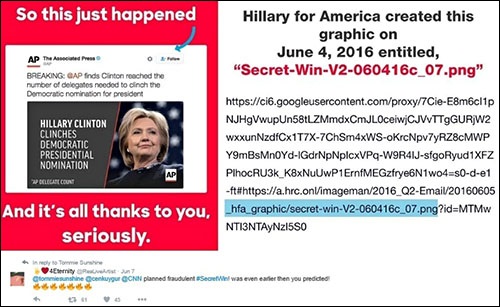 If Hillary Clinton was hoping for Bernie Sanders’ supporters to fall in line and join her corporate media coronation, that scenario has taken an abrupt turn off the page. Charges now flying by Sanders’ supporters on social media make the Politburo look like pikers when measured against the alleged conspiracy between the Clinton campaign and Associated Press.

Here’s the timeline of the alleged conspiracy and sacking of a free election process:

On Monday evening, June 6, on the very eve of presidential primaries in six states, the Associated Press released its survey findings that Hillary Clinton had enough superdelegate votes to clinch the Democratic Presidential nomination. This is how the Intercept’s Glenn Greenwald reported what happened:

“Last night, the Associated Press — on a day when nobody voted — surprised everyone by abruptly declaring the Democratic Party primary over and Hillary Clinton the victor. The decree, issued the night before the California primary in which polls show Clinton and Bernie Sanders in a very close race, was based on the media organization’s survey of ‘superdelegates’: the Democratic Party’s 720 insiders, corporate donors, and officials whose votes for the presidential nominee count the same as the actually elected delegates. AP claims that superdelegates who had not previously announced their intentions privately told AP reporters that they intend to vote for Clinton, bringing her over the threshold. AP is concealing the identity of the decisive superdelegates who said this.”

The Dow Jones media outlet, MarketWatch noted: “The AP made the call on the basis that enough of the so-called superdelegates — party elites including President Barack Obama and President Bill Clinton, who have special voting rights — were now supporting Clinton.” (Obama and Bill Clinton? No wonder the Associated Press didn’t reveal whom they called.)

It did not seem to bother the Associated Press that the official position of the Democratic National Committee is that superdelegate votes should not be included in press tallies until the superdelegates actually vote at the Democratic National Convention, to be held on July 25-28 in Philadelphia. Superdelegates are freely allowed to change their minds until they actually vote and Clinton has enough explosive baggage now hanging over her head that predicting what could happen by late July is impractical. (Clinton’s use of a private email server while Secretary of State is under an active FBI investigation; a documentary on foreign cash flowing to the Clinton charity will be released soon, as well as a new book filled with explosive allegations by Gary Byrne, the former Secret Service agent who guarded Bill Clinton’s Oval Office.)

Moments after the Associated Press made their announcement on Monday, June 6, Hillary’s campaign sent out an email to their supporters acknowledging the AP announcement. But in a move reminiscent of Politburo screw-ups, the image in the Hillary Clinton email had this file name: “secret-win-V2-060416c_02.png.” The date embedded in the file name suggested to Sanders’ supporters that on June 4, 2016, two days before the AP went public with their survey of secret superdelegates, the Hillary Clinton campaign knew about this coming announcement from AP and had given it a code name of “Secret Win.”

At 9:34 p.m. Eastern Time on June 6, Christina Bellantoni, a political reporter for the Los Angeles Times, Tweeted a screen shot of the email from Clinton with text stating that “The images in this Clinton email are labeled ‘secret win.’ ” That unleashed a flurry of accusations which are still escalating by the minute.

Wednesday, June 8: Insults against AP and corporate media are being hurled at a #OccupyAP Twitter page; the story is spreading across media venues, including mainstream media.

Snopes took a look at the controversy and makes this conclusion: “It is true that the Twitter video’s claims checked out. The campaign’s e-mail was sent out after the 6 June 2016 call by Associated Press, and the embedded image was ambiguously titled ‘secret-win-V2-060416c_02.png’ But ‘V2’ implied at least two versions of the graphic existed, another of which might have shown an entirely different outcome to the 7 June 2016 primaries.”

The AP controversy is being fed further by outraged voters in California’s primary yesterday who are reporting that many new voters were not on the voter rolls, that thousands were given provisional ballots which have not been included in the current count, that polls opened late and some had broken machines.

You’ll be contented to know that the Associated Press is reporting that Hillary Clinton won California.