Senator Elizabeth Warren did not have a good weekend. After endorsing Hillary Clinton for President on Thursday, Warren was ridiculed by columnist Maureen Dowd in the New York Times on Sunday for previously portraying Clinton as a shill for big money interests while now vowing to jump into the ring to get Clinton elected to the highest office in the land. In a 2003 book, The Two-Income Trap: Why Middle-Class Mothers and Fathers Are Going Broke, co-authored by Warren and her daughter, Amelia Warren Tyagi, the pair wrote that “Clinton had taken $140,000 in campaign contributions from the banking industry” and then sold out single mothers by voting in favor of a bankruptcy bill that Clinton had previously called “that awful bill.” Warren also addressed Clinton’s claim that she had worked to improve the bill by 2001 when she voted in favor of it. In a footnote in the book, Warren wrote:

“…the bill would permit credit card companies to compete with women after bankruptcy for their ex-husbands’ limited income, and this provision remained unchanged in the 1998 and 2001 versions of the bill. Senator Clinton claimed that the bill improved circumstances for single mothers, but her view was not shared by any women’s groups or consumer groups.”

“What’s so ironic about this is that if Goldman Sachs, as an institution, were to somehow take human form and run for political office, it would be — hell, it is — Hillary Clinton…Warren can back whomever she pleases. But let’s not pretend Hillary Clinton is anything other than the manifestation of everything Warren claims to be fighting against.”

Warren was also assailed across Facebook by Senator Bernie Sanders’ supporters. Warren had withheld her endorsement of Sanders during the primaries, when it could have made a pivotal difference. Sanders’ platform on Wall Street reform is much more aligned with Warren’s than is Clinton’s. Warren was also greeted by protesters yesterday outside a World War II Veterans Club in Northampton, Massachusetts, where she was set to deliver a talk on income inequality. The protesters were dressed in all black to mourn what they saw as Warren selling out to establishment politics. Jamie Czupkiewicz Guerin, who had participated in the protest, wrote on Facebook that Warren had taken the time to speak to each protester following her talk:

“She waited and talked to every one of us. It leads me to believe that she held this speech at this venue in a pro Bernie town because she WANTED to talk to us. To sway us. I am not sold though. I held her hand and looked directly into her eyes and told her that my heart was broken. I told her that I cried for two days about her endorsement. I told her that a lot of people are disappointed. She told me she was sorry. I told her I would never vote for Hillary and that I would be going to Philly. She told me that she is sorry because that would mean a vote for Trump. I told her I don’t believe that and that I am #StillSanders. Then I walked away…” 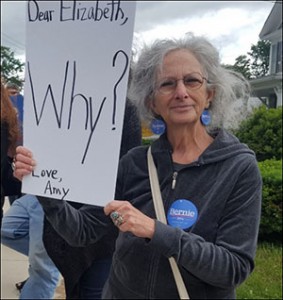 Senator Warren has built her career on criticisms of Wall Street’s money spigot, which she correctly says is corrupting government, perpetuating the growing divide between the super rich and the other 99 percent, while perverting so many members of Congress that meaningful Wall Street reform like restoring the Glass-Steagall Act hangs in limbo. And yet, despite years of pounding the table on these issues, last Thursday Senator Warren went on the Rachel Maddow show on MSNBC and spiritedly endorsed Hillary Clinton for President – an establishment politician with a criminal FBI investigation hanging over her head for violating State Department policy in the handling of her emails on a private server in her home while Secretary of State. Clinton is also the only Presidential candidate to have personally accepted millions of dollars from Wall Street for giving speeches and who is now refusing to release the transcripts of what she told Wall Street in exchange for those hefty fees.

For those listening carefully, there were some notable moments in the Maddow interview with Senator Warren on Thursday evening. At one point, Warren attempted to show how cold and calculating the Republican Presidential candidate, Donald Trump, was during the housing crash. Warren stated:

“Look, I’ll pick one example when we talk about him and that is the housing crisis. Remember where Donald Trump was in this? In 2007, before the big explosion in 2008, a lot of people are starting to look around and say, whoa, we’ve got an inflated bubble here, there’s going to be trouble coming. And Donald Trump said,  was quoted,  he was excited for the crash because he knew how to make money off it. He was rooting for an economic crash because it was going to help line his pockets. What kind of a person does something like that? What kind of a person roots for people to be kicked out of their home? What kind of a person does that?”

This was the perfect opportunity for Maddow to say to Warren, “Well, the kind of people that do something like that are the very people on Wall Street that are funding your endorsee’s political campaign.” Both Goldman Sachs and Citigroup made wagers that homeowners would default on their subprime mortgages after both firms participated in building this pile of toxic waste. Not only did Goldman Sachs personally pay Hillary Clinton $675,000 for three speeches but it and Citigroup rank among her top four lifetime political campaign donors according to the Center for Responsive Politics.

As McClatchy newspapers reported in November 2009:

“In 2006 and 2007, Goldman Sachs Group peddled more than $40 billion in securities backed by at least 200,000 risky home mortgages, but never told the buyers it was secretly betting that a sharp drop in U.S. housing prices would send the value of those securities plummeting.

“Goldman’s sales and its clandestine wagers, completed at the brink of the housing market meltdown, enabled the nation’s premier investment bank to pass most of its potential losses to others before a flood of mortgage defaults staggered the U.S. and global economies.”

Later in the interview with Maddow, Warren explains the frustrations in Washington:

“As a Democrat, one of the things that frustrates me the most is there are a lot of times we just don’t get in the fight. We ask pretty please if we can have things or we make the argument for why it is the best thing to do, and then wait patiently for the other side to agree to come along. We negotiate. We start our opening position by negotiating. You know, and I get that. I get the reason that you should be willing to negotiate sometimes. But you also ought to be willing to throw a punch. And there are a lot of things that people say about Hillary Clinton. But nobody says that she doesn’t know how to throw a punch.”

Yes, both Hillary and Bill Clinton know how to throw a punch but it is quite frequently a punch in the gut to the poor and middle class and a giveaway to their donor base, the one percent. Think welfare reform, bankruptcy reform, and financial deregulation. It was the deregulation of derivatives and the repeal of the Glass-Steagall Act during the Bill Clinton presidency that allowed speculating investment banks and brokerage firms to merge with commercial banks holding FDIC insured deposits. That set the stage for the epic financial collapse in 2008 from which the poor and middle class have yet to recover.

At one point Maddow asked Warren:

“You are, as somebody who chose not to run for president yourself despite a lot of people pressuring you to do that, you still wield enormous influence, and a lot of people on the left side of this party look up to you. That’s why your endorsement was so coveted. I think that’s why Senator Sanders’ supporters have been so upset you didn’t endorse him during the primary. They think it would have made a very big difference. And they’re upset with you today and tonight because of this endorsement. What’s your reaction to that?”

“My reaction is that I thought it was important for the primary to go forward, and not to try to tilt it one way or the other, to try to get or try to end it. That’s really what I wanted to see. I wanted to see Democrats out there talking about our core set of issues. And let people around this country vote; let people have caucuses; let them do it however they’re going to do it. But the point is to get us engaged and to get us engaged on that set of issues.

“Rachel, can we just think about how different it is today than it was five years ago. We talk today, we have open conversations about the best way to make sure that young people are going to be able to get an affordable education, that, gosh, this matters. And just, by the way, notice Trump’s view of this. You know, Trump believes that you just cheat them. You know, that’s what is happening right now, this is Trump University. We have talked about the best way to put more restrictions on Wall Street, to be able to rein Wall Street in tighter.”

Warren is clearly missing the big picture here. The Democratic base is fed up with conflating empty talk that goes nowhere with progress. Student loan debt, fueled by the same greedy Wall Street banks, is now $1.2 trillion. It’s crushing the lives of young people, creating student prostitutes at NYU, while lining the pockets of the serial criminals on Wall Street that the Obama administration refuses to put in jail.

As Warren correctly pointed out in a previous Senate hearing, Wall Street received $13 trillion in cumulative loans as a secret bailout through the Federal Reserve. Much of that money was loaned at below 1 percent interest. Struggling students, the future of America, are still paying four to six times that amount after all the talk in Washington.

Increasingly, the progressive base in America has lost confidence in its leaders in Washington. The Warren endorsement of Clinton adds mightily to the cynicism. A Reuters/Ipsos poll conducted June 7-10 showed that 44 percent of Democrats nationwide would like Senator Bernie Sanders to make an independent run for the White House. A mere 3 percent more, or 47 percent, said he should not.

In the meantime, Bernie Sanders’ supporters are planning marches in cities across the country in July and a massive March in Philadelphia on the first day of the Democratic National Convention on July 25.

If Elizabeth Warren had hopes of unifying the Democratic Party – it would appear that effort has bombed big time and served only to undermine her own credibility.