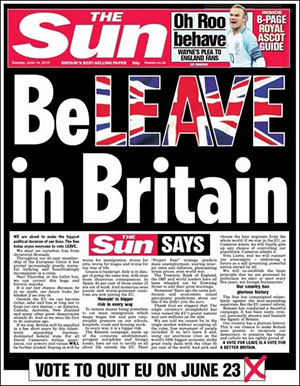 The UK’s largest newspaper, The Sun, with a daily print run of 1.7 million, has delivered a harsh indictment on its front cover today on continuing to allow European central planners and global bankers to run the UK by edict. UK citizens will vote on June 23 on whether to leave the European Union, a vote called Brexit, short for British Exit. The UK’s Guardian newspaper is reporting that two ICM polls, one conducted online and one by telephone, showed 53 percent support for leaving versus 47 percent for remaining in the EU.

The message should serve as a sharp warning to Americans, who have allowed their central bank, the Federal Reserve, to march to the beat of the Wall Street bankers’ edicts while achieving catastrophic results for the country and its citizens. Since the Wall Street crash of 2008, enabled by the formation of trillions of dollars in dicey derivatives and a mountain of subprime debt while the Federal Reserve kept its blinders securely in place, the U.S. national debt has doubled to $19 trillion while the Fed’s balance sheet has ballooned from $800 billion to $4.5 trillion through endless rounds of sopping up the toxic waste (called “Quantitative Easing” or QE to pretty it up).

Perhaps America needs a national referendum on a FedExit. That dialogue was supposed to have begun in the U.S. Senate back in 2014, starting with stripping the central bank of its power to supervise Wall Street bank holding companies because it had clearly demonstrated itself to be not just a captured regulator but pure putty in the hands of the Wall Street banks. (See here, here, here and here.) The dialogue ended abruptly, as most things do in the U.S., with no explanation as to why to the American people.

The Sun tells its readers that the Brexit vote “is our last chance to remove ourselves from the undemocratic Brussels machine.” (The EU operates out of Brussels.) Americans have yet to have the chance to vote on removing themselves from the undemocratic Federal Reserve where citizens are stripped of the right to elect either the Board of Governors or the boards of the regional Fed banks.

The Sun goes on to remind its readers what EU leadership has done for Europe:

“Greece is bankrupt. Italy is in danger of going the same way, with even more disastrous consequences. In Spain, 45 per cent of those under 25 are out of work.”

Let’s compare those findings to what Federal Reserve monetary policy has done for the U.S. since it became an appendage of Wall Street:

In 1993, U.S. national debt stood at $4.4 trillion. At that point, the country was 217 years old. Over those two centuries, the U.S. had paid for the Revolutionary War, the Civil War, financed massive stimulus programs to climb back economically from the 1929 Wall Street crash and Great Depression. The U.S. had also paid for World Wars I and II and the Vietnam War. Today, the national debt stands at $19 trillion. It has more than quadrupled in just 23 years and doubled in just eight years.

The Sun goes on to say that the European Union has proved itself to be “breathtakingly incompetent in a crisis.”

Contrast that to how the Federal Reserve has performed in the U.S. The too-big-to-fail banks that crashed the financial system in 2008 are even bigger today. The derivatives on the books of the five largest bank holding companies at December 31, 2008 stood at $168.94 trillion. Today, the five largest bank holding companies (JPMorgan Chase, Bank of America, Citigroup, Goldman Sachs and Morgan Stanley) hold $218.98 trillion in derivatives according to the Office of the Comptroller of the Currency’s report for December 31, 2015 – an increase of 30 percent.

The ongoing fragility of the U.S. financial system and its toxic waste dump of derivatives that the Fed refuses to rein in, has left the U.S. in a twilight zone of unprecedentedly low interest rates which are starving senior citizens of adequate interest on their CDs and Treasury notes to buy food and pay bills. The Fed’s promise to begin normalizing rates from its seven year zero-interest-rate-policy or ZIRP has worked out like this:

On December 16, 2015, the Fed announced its first rate hike in seven years, on the path, it told us, to a normalization of interest rates. On that date, the 10-year U.S. Treasury Note that seniors could invest in for income paid a measly 2.29 percent rate of interest. On January 20 of this year, that yield stood at 1.97 percent. This morning, the 10-year Treasury yield is 1.59 percent. Seniors have lost almost a third of their yield since the Fed promised to begin normalizing interest rates.

The Sun talks about the strategy of fear that the other side is using to keep citizens in line. It writes:

“The Remain campaign, made up of the corporate establishment, arrogant europhiles and foreign banks, have set out to terrify us all about life outside the EU.

That’s how Wall Street banks are controlling the Obama administration, Congress, and the Federal Reserve: follow their edicts or economic chaos will ensue. That’s also how they got a $13 trillion secret bailout from the Fed in cumulative loans, many at below 1 percent interest.

The big difference here and across the pond is that UK citizens had the courage to demand a referendum. In the U.S., citizens have forgotten how to demand a voice at the table. It remains to be seen if Senator Bernie Sanders and his gutsy band of supporters can change all that on July 25 at the start of the Democratic Convention in Philadelphia.