Trump States as Fact: “If You Collude in the Stock Market, They Put You in Jail.” Seriously? 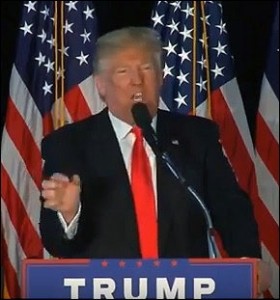 Yesterday, speaking before a rally audience in Rhode Island, Donald Trump called the coordination of election strategy between presidential candidates Senator Ted Cruz and Governor John Kasich “collusion.” (See video clip below.) He then made the following off the wall statement:

That statement is profoundly important on multiple levels. For one, it raises the question of just how closely Donald Trump has followed the serial crimes of Wall Street and the Justice Department’s failure to deliver jail time.

Despite holding a degree from the Wharton School, perhaps Trump thumbs through the real estate section of the New York Times and skips over the Wall Street news. Maybe Trump is entrenched in an illusion that it’s his charisma and star quality that is responsible for his meteoric rise in the primary races rather than a citizenry outraged that one percenters on Wall Street created the greatest financial crash since the Great Depression through fraud, deceit, cooked books, and yes, lots of collusion, and not one of the executives of these firms has seen the inside of the Hoosegow.

A retired, veteran trial lawyer at the Securities and Exchange Commission, James Kidney, is one such outraged citizen. In April 2014, Kidney set off pandemonium inside the SEC by giving an interview with Bloomberg News and releasing the full text of his March 27 retirement speech. In the speech, Kidney excoriated the SEC’s leadership for policing “the broken windows on the street level” while ignoring the “penthouse floors.” Kidney linked the demoralization at the agency to its revolving door to Wall Street since the most talented and ambitious “see no place to go in the agency and eventually decide they are just going to get their own ticket to a law firm or corporate job punched.” (Retirement Remarks of SEC Attorney, James Kidney.)

Last week, investigative reporter Jesse Eisinger revealed that Kidney had taken an even bolder step to get the truth out to the American people. He had turned over to Eisinger his investigative files, including emails, on one of the most explosive cases from the subprime era: the infamous Goldman Sachs Abacus deal that looked and smelled like outright collusion between Goldman and a hedge fund run by Wall Street billionaire John Paulson. According to Eisenger’s article, the “documents provided by Kidney show that SEC officials considered and rejected a much broader case against Goldman and John Paulson & Co.” but then dropped it.

In its April 16, 2010 complaint, which mysteriously did not charge Paulson, the SEC explained the arrangement as follows: “The SEC alleges that one of the world’s largest hedge funds, Paulson & Co., paid Goldman Sachs to structure a transaction in which Paulson & Co. could take short positions against mortgage securities chosen by Paulson & Co. based on a belief that the securities would experience credit events.” “Credit events” means that Paulson wanted to put dogs in the portfolio because he wanted to make bets they would fail.

The SEC complaint goes on: “…after participating in the portfolio selection, Paulson & Co. effectively shorted the RMBS [Residential Mortgage Backed Securities] portfolio it helped select by entering into credit default swaps (CDS) with Goldman Sachs to buy protection on specific layers of the ABACUS capital structure. Given that financial short interest, Paulson & Co. had an economic incentive to select RMBS that it expected to experience credit events in the near future. Goldman Sachs did not disclose Paulson & Co.’s short position or its role in the collateral selection process in the term sheet, flip book, offering memorandum, or other marketing materials provided to investors.”

Paulson made approximately $1 billion on the deal according to the SEC while unknowing investors lost about the same amount. In a profile piece on Paulson in the December 2013 issue of CIO Magazine, Kip McDaniel summed it up like this:

“Upon the revelation of Paulson’s historic year, everyone had an opinion, not all of them favorable. Paulson had grown rich on the backs of America’s poor; he was lucky, not skillful; he’d actually helped foster the bubble by getting Goldman Sachs and others to create structured products designed to fail: ‘It’s like being the Miami Heat and playing the Chicago Bulls—but being able to pick the Bulls’ starting lineup from the crowd,’ according to one investor.”

In 2010 the SEC settled the charges against Goldman Sachs for $550 million. Paulson skated free, never even charged. In fact, after all of this news broke, New York University saw Paulson as the model of moral fortitude and plastered his name on the auditorium at the Stern School of Business – following a $20 million donation from the hedge fund mogul. Only a low level individual at Goldman was charged, Fabrice Tourre, who faced only a civil trial – not a criminal trial. Tourre eventually paid a fine and moved on.

Not only was the SEC derelict in not charging individuals but according to an in-depth investigation by the PBS program Frontline, so was the Justice Department under Obama’s U.S. Attorney General Eric Holder.

In 2013 Frontline aired a program titled “The Untouchables,” revealing that the U.S. Justice Department under its Criminal Division chief, Lanny Breuer, who came from the same corporate law firm as Holder, Covington & Burling, had shown no serious interest in conducting a meaningful investigation against the powerful Wall Street firms for their role in the financial collapse. The exchange in the program between producer and moderator Martin Smith and Breuer went as follows:

In a post at his blog last week, James Kidney explained why he had turned over the SEC documents to Eisinger. He also pointed the media to this under-reported aspect of the Justice Department’s dubious failure to prosecute individuals for their role in the financial collapse:

“The settlements with Goldman and other Big Banks were resolved under the Financial Institutions Reform, Recovery and Enforcement Act (FIRREA), which allows the Feds to ignore the normal five-year statute of limitations for fraud, but does not permit suit by private party victims.  As has been the practice with DOJ [Department of Justice] when dealing with Wall Street, no criminal charge was brought.  In fact, no complaint was filed in any of these cases.  Instead, DOJ entered into contractual arrangements with the banks.  Failing to fulfill their obligations under the contract would subject them to civil enforcement as a breach of contract matter, not a contempt charge in federal District Court…Law enforcement by contract? Clearly, the banks made it a condition of settlement that no complaint, civil or criminal, be filed. That might gum up the works by requiring state regulators to take action under their own rules, or cause other collateral consequences.”

Systemic collusion was also at the heart of the previous Wall Street crash when technology stocks and the dot.com bubble burst in 2000. From peak to trough, Nasdaq transferred over $4 trillion from the pockets of small investors to predominately the wealthy market manipulators.

As hundreds of court cases, internal emails, and insider testimony now confirm, the dot.com bust turned collusion into an art form. None of the key culprits went to jail in that massive fraud either. Here’s how it went down:

First, Wall Street brokerage firms issued knowingly false research reports to the public to trumpet the growth prospects for a specific company; second, the firms lined up big institutional clients who were instructed how and when to buy at escalating  prices to make the stock price skyrocket. This had an official name inside the walls of the manipulators: “laddering.” Next, managers of the fleets of stockbrokers at the various brokerage firms instructed their flock to stand pat as the stock prices soared. If the stockbroker tried to get his small client out with a profit, he was hit with a so-called “penalty bid,” effectively taking away his commissions on the trade. This sent the clear warning to other stockbrokers to leave their clients in the dubious deals. Only the wealthy and elite were allowed to capture the bulk of profits on these deals.

One other practice was called “spinning.” This is how the SEC explained that technique in its charges against brokerage firm Salomon Smith Barney:

Jack Grubman, a stock analyst at Salomon Smith Barney, was at the center of this era of collusion. He was charged by the SEC for “fraudulent research.” He never went to trial or was criminally charged. He paid a $15 million fine, was barred from the industry, and walked away. His haul while at Salomon Smith Barney according to the SEC, “exceeded $67.5 million, including his multi-million dollar severance package.”

There is one critical demand of the Presidential contenders that the American public must make. That is to have a knowledgeable command of how Wall Street has become a criminal enterprise and how that enterprise is being propped up by gutless or compromised Federal law enforcement. If the Presidential candidate does not have that working knowledge, and a genuine commitment for change, he or she is just another empty suit.