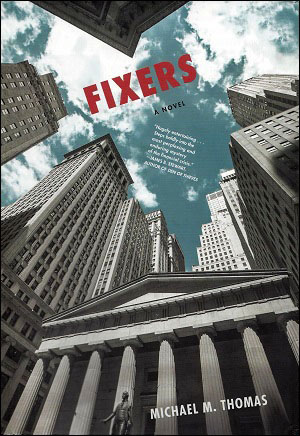 At Wall Street On Parade we call it continuity government. Michael M. Thomas, in a new book of quasi-fiction, calls it Fixers, the idea that no matter who comes and goes in the Oval Office, Wall Street has a fix in to make sure it is protected. The Thomas book could not come at a more inconvenient time for outgoing President Obama and the next leg of the continuity government that Wall Street hopes to install in the White House – otherwise known as Hillary Clinton.

Fixers notes that the characters with speaking parts in the book are “wholly creatures of the author’s imagination and invention” but the securities “transactions and situations” in which those characters are involved are “matters of historical record.”

So what you’re getting in Fixers is a spellbinding analysis of the actual dirty deals that toppled Wall Street in 2008 with a new twist – a fictitious character who says he laundered $75 million into the Democratic presidential campaign of Hillary Clinton’s primary challenger in 2007 in exchange for three names on an index card. Those three names had to become the “hope and change” President’s chief economic advisor, Treasury Secretary, and head of the criminal division of the Justice Department. These three key posts were to keep piles of bailout money flowing to Wall Street while simultaneously making sure no Wall Street executives were prosecuted for the crimes that brought on the crash.

The primary challenger to Hillary Clinton and the man who beats her and goes on to become President is called simply OG in the book. (OMG would have worked for me.)

The details in the book surrounding the three names on the index card seem to be channeling Larry Summers, Tim Geithner, and Lanny Breuer, who took the respective posts of chief economic advisor, Treasury Secretary and head of the Justice Department’s criminal division in the first Obama administration and, indeed, sluiced trillions to Wall Street while the Justice Department failed to prosecute, saying it was worried  about collateral damage, such as triggering bank layoffs. (Like the collapse of the U.S. economy from untamed financial corruption is not collateral damage.)

Fixers takes us back to the earliest days in 2007 when the rumbles of what would become the greatest Wall Street crash since the Great Depression were first being recognized by the smart money crowd on Wall Street. Chauncey Suydam, a one time CIA agent has breakfast with his former boss at the CIA, who now heads a Wall Street investment bank called Struthers Strauss. The Struthers Strauss chief wants Chauncey to fix the election with the $75 million and put the three selected people in those key posts.

The Struthers Strauss securities transactions throughout the book sound identical to those of Goldman Sachs, including a so-called “Protractor” deal that has all the bells and whistles and settlement terms as the Goldman Sachs Abacus deal. The co-conspirator on the real Abacus deal, hedge fund billionaire John Paulson, was never prosecuted or fined despite his hedge fund being named in the SEC’s complaint against Goldman Sachs, which settled the case for $550 million.  Michael Thomas has a very believable explanation for how his fictional character in the “Protractor” deal, James Polton, managed to escape prosecution. (We’re not going to spoil the surprise or how Struthers Strauss is said to have extracted its revenge from Polton.)

The writing of Thomas has an unusually authentic feel in the recounting of the Wall Street frauds and events leading up to and after the 2008 crash, including some events that have been all but forgotten. One reason for the authenticity is that Thomas once worked for Lehman Brothers, intimately understands how the Street thinks, and wrote extensively about Wall Street during the 2008 crash for the New York Observer.

And, along with us, the Black Agenda Report, CounterPunch and others, Thomas was quick to size up Obama as a con man when it came to cleaning up Wall Street. Just five months after President Obama took office in 2009, Thomas wrote at the Observer: “Every day now, as this sorry story plays out, I find myself wondering whether Obama isn’t a bigger Wall Street con than Madoff.”

One of the fictional characters in the book, nicknamed Scaramouche, an elderly veteran of Goldman Sachs, sends a deathbed letter to the main character, Chauncey, raising a similar concern about the President:

“The present occupant of the White House represents the final piece of the puzzle. I wonder if his failures to deliver really aren’t the result of an intransigent opposition party, as we have been told, but have been part of a larger scheme from the outset. He certainly came on as if sent by central casting: charismatic, articulate, just black enough, with a smart attractive wife and charming children: just the type the money men would have been looking for to bring their oligarchic scheme to final fruition.”

“The Wall Street plan for the Obama-bubble presidency is that of the cleanup crew for the housing bubble: sweep all the corruption and losses, would-be indictments, perp walks and prosecutions under the rug and get on with an unprecedented taxpayer bailout of Wall Street. (The corporate law firms have piled on to funding the plan because most were up to their eyeballs in writing prospectuses or providing legal opinions for what has turned out to be bogus AAA securities. Lawsuits naming the Wall Street firms will, no doubt, shortly begin adding the law firms that rendered the legal guidance to issue the securities.) Who better to sell this agenda to the millions of duped mortgage holders and foreclosed homeowners in minority communities across America than our first, beloved, black president of hope and change?

“Why do Wall Street and the corporate law firms think they will find a President Obama to be accommodating? …vetting included his remarkable ‘yes’ vote on the Class Action Fairness Act of 2005, a five-year effort by 475 lobbyists, despite appeals from the NAACP and every other major civil rights group. Thanks to the passage of that legislation, when defrauded homeowners of the housing bubble and defrauded investors of the bundled mortgages try to fight back through the class-action vehicle, they will find a new layer of corporate-friendly hurdles.”

The Black Agenda Report, which writes for Black Americans, also noted the following in February 2008:

And then there was CounterPunch, which published an entire anthology of articles on the red flags in the Obama candidacy, titled Hopeless: Barack Obama and the Politics of Illusion, including my article referenced above. The editors, Jeffrey St. Clair and Joshua Frank, describe the books as follows:

Anyone who witnessed Obama’s first press conference as President-Elect knew the fix was in. To his right stood Larry Summers and to his left stood Robert Rubin. The date was November 7, 2008. The public was repulsed by Obama having the gall to put these two on his economic transition team.

Both Rubin and Summers had served as Treasury Secretaries under the presidency of Bill Clinton and pushed for the repeal of the Glass-Steagall Act and deregulation of derivatives, two key events that led to the severity of the 2008 crash. Rubin had gone directly from the U.S. Treasury to the Board of Citigroup, the prime beneficiary of the deregulation, and collected over $125 million in compensation over the next decade. Rubin’s era oversaw a rap sheet at Citigroup that would make Bernie Madoff blush. When Rubin finally announced his resignation from Citigroup on January 9, 2009, Citigroup shareholders had lost 88 percent in the value of their shares and the U.S. government had propped up the insolvent Citigroup carcass with the largest taxpayer bailout in the history of finance: $45 billion in equity infusions; over $300 billion in asset guarantees; and over $2 trillion in cumulative, below-market-rate loans.

There are wickedly funny passages in Fixers (it would be every bit as entertaining on the big screen as The Big Short). One of our favorite passages is the following, about Senator John McCain picking Sarah Palin as his VP running mate on the GOP ticket in the 2008 election:

“Do you want to know what a political death wish made flesh looks and sounds like? Start with a reasonably pretty face concealing a brain evidently empty of all useful knowledge and any fond regard for truth. Add a nasal voice, the kind that Wodehouse says can open an oyster at twenty paces, in which is delivered gaffe after gaffe, often employing some very unusual grammatical constructions, along with a kind of ‘mean girl’ knowingness, and what have you got? Sarah Palin.”

The idea that Senator McCain, a military hero, would willfully, without outside pressure, select Palin to sit a heartbeat away from the Presidency, is highly doubtful. This raises the question, in our mind, if Palin wasn’t simply more insurance for putting Obama in the White House.

Whether there was some former CIA spook fixing the election or a consortium of Wall Street banks and their lobbyist/law firms sluicing money into the Obama campaign and calling the shots on his key posts, here’s where we stand today:

And even researchers in an office of the U.S. Treasury Department are warning that Wall Street is still dangerous to the economy, writing just last week that “counterparty credit risks to the banking system collectively have risen and may suggest a greater systemic risk than is commonly understood.”

Unlike in prior Presidential elections, voters actually have a real choice this year. There is one candidate and one candidate only who has no Super Pac, is not reaping windfalls of cash from Wall Street or Big Pharma or Big Oil or corporate lobbyists. That person is Bernie Sanders. Tomorrow, a mini Super Tuesday, will give voters another chance to show if they genuinely want to climb out of a rigged economy run by the Fixers.