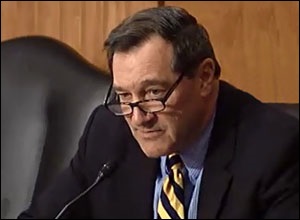 A young black girl got a civics lesson in dystopian society sitting in the front row of the Senate Banking hearing this past Tuesday. Her expression was that of someone watching a Halloween horror film. The young girl was the daughter of Lisa Fairfax, a George Washington University law professor who brought her family members along to share her confirmation hearing to potentially become a Commissioner at the Securities and Exchange Commission. Hopefully, what the young girl observed will be enough to head her off in a career direction of white collar criminal law.

Senator Joe Donnelly delivered a heartfelt review of what is going on in his home state of Indiana, asking the two SEC nominees, Hester Peirce and Fairfax, what role the SEC should play in the matter. Donnelly stated:

“Ms. Peirce, I want to tell you a little bit about what happened in Indiana. I know you’re from Ohio. We had 2100 workers fired for a company that said we are at the high end of expectations for earnings; that is in the middle of a $16 billion stock buyback; and they were fired so the jobs could be sent to Mexico for $3 an hour. Among the folks fired were over 60 veterans who had put their lives on the line for our country.

“Going a little bit more into this, the CEO from two years ago, approximately, walked away with a golden parachute of over $190 million in stocks and in others. The present CEO makes over $10 million a year and the savings they’re gonna have by firing all these workers who gave their heart and soul to the company, they say it’s going to be $60 million approximately. I think it’s probably less. But that’s one third of one percent of the stock buyback.”

Senator Donnelly is referring to United Technologies CEO Louis Chenevert who walked away from the company in late 2014 with a golden parachute package valued at “more than $195 million in company stock and pension benefits, according to an analysis by ClearBridge Compensation Group,” as reported by Fortune magazine.

Donnelly may not have been aware of this aspect of the story: While traveling on company business, Chenevert had taken a time-out in Taiwan to observe the progress on his 110-foot  yacht that was being built there. Chenevert also had an apparent big-is-better fetish for everything except American jobs. He had evolved from owning a 63-foot yacht to an 85-foot yacht to the super-luxury 110-foot variety. Chenevert has now moved to Goldman Sachs, where it’s unlikely he’ll be getting any push back for his extravagant tastes.

The new CEO, Gregory Hayes, is the former CFO and, as Donnelly notes, is now making over $10 million in total annual compensation.

There’s one more thing that Donnelly didn’t have time to mention in his limited question and answer session: while CEO Chenevert was having his love affair with sea-going vessels, his company, which has received billions of dollars in U.S. government contracts, admitted in 2012 “that the lure of up to $2 billion in helicopter sales to China had caused it to export computer software illegally that helped China create its first modern attack helicopter,” according to a report by the Center for Public Integrity.

Donnelly pressed the two SEC nominees, who failed to give a clear-cut answer, why the SEC shouldn’t intervene when United Technologies is attempting to boost its share price with a $16 billion buyback when that is more than twice the company’s annual earnings. (According to MarketWatch, the $16 billion buyback amount is through 2017. See our related articles below to grasp the dark underbelly of stock buybacks.)

Donnelly, who clearly can’t get his mind around the depraved state of American capitalism, ended sadly with this:

“The American promise — I will work hard, I will make sure this company does well. In return, their shareholders are gonna do awesome. And in return all I ask for is a halfway decent salary and a chance to put a roof over my head. That’s the American dream and I think the SEC ought to stand up for the American dream.”

If the Democrats on the Senate Banking Committee really want to see the SEC function as a watchdog with teeth, they would do well to stop confirming SEC commissioners who were Wall Street lawyers or married to Wall Street lawyers.

The top repugnant moment of the day was listening to Senator Chuck Schumer of New York, who has been a perpetual shill for Wall Street excesses, attempt to pass himself off as someone who is outraged that the SEC will not pass a rule to force publicly-traded companies to reveal the details of their political spending. (Congress itself has actually blocked that effort until the end of this current fiscal year by an amendment crammed into the December 2014 Omnibus spending bill.)

Schumer has apparently caught on to the seething public anger toward those in Washington shilling for Wall Street. Coincidentally, he is running for reelection this year. In 2010, Schumer’s two largest campaign contributors were the big Wall Street law firm, Paul Weiss, and the hedge fund, Paulson & Company, that the SEC said conspired with Goldman Sachs to create subprime investment products designed to fail in order to make a tidy profit themselves.

(Watch a live video below as 1400 workers at a division of United Technologies learn for the first time that their jobs are moving to Mexico.)

A Closer Look at Goldman Sachs’ Stance on Share Buybacks