Americans have painful recollections of how allowing ratings agencies to take Wall Street money and dole out bogus triple-A ratings on subprime mortgages tanked the U.S. housing market in the worst economic collapse since the Great Depression. They fully understand that the Supreme Court’s Citizens United decision that opened the floodgates to pay-to-play corporate financing of elections has grotesquely disfigured participatory democracy in America. Now they’re about to learn how America’s “free press” is able to be bought – literally.

This past Friday, March 18, Laurence Kotlikoff, a Forbes contributor, Professor of Economics at Boston University and bestselling co-author of Get What’s Yours: The Secrets To Maxing Out Your Social Security, tweeted the headline of an article he had just posted at Forbes: “JPMorgan Chase – The True Story of America’s Most Corrupt Bank.” The Tweet linked to a two-page article by Kotlikoff at Forbes, which began with these two paragraphs:

“Between Bernie Sanders and Elizabeth Warren, we’ve heard a lot about the corruption on Wall Street. But, if you want to understand exactly what happened and why, read JPMadoff: The Unholy Alliance Between America’s Biggest Bank and America’s Biggest Crook.

“Written by trial lawyers, Helen Davis Chaitman and Lance Gotthoffer, this heavily-researched, meticulously documented book lays out for the world to see the absolute corruption of JPMorgan Chase – America’s biggest bank. And the authors explain how Obama has furthered Wall Street crime by refusing to enforce America’s criminal laws against America’s biggest criminals – not Madoff, but JPMorgan Chase.”

By Friday evening, all that one got at the link to Kotlikoff’s article was a Forbes’ error message saying the page couldn’t be found. By this morning, even a partial Google cache of the article is giving the reader just a second or so to see the headline, then disappearing into thin air.

We emailed Mia Carbonell, Senior Vice President, Global Corporate Communications for Forbes, asking if anyone connected to JPMorgan Chase had requested that the article to be removed. Carbonell responded:

“Forbes was not contacted by anyone at or on behalf of JPMorgan. An updated version of contributor Laurence Kotlikoff’s post will be available on Forbes.com this week.”

If you haven’t been closely following the criminal charges against JPMorgan Chase, you might think that the Forbes’ lawyers had every right to yank the story out of fear of a libel lawsuit. Unfortunately, for both America and the banks’ shareholders, JPMorgan Chase has the odious distinction of being both America’s largest bank and the only standing U.S. mega bank to have three felony counts against it by the U.S. Justice Department. Two felony counts in 2014 were in connection with its role in the Bernie Madoff Ponzi scheme. Those felonies received a deferred prosecution agreement.

At the time of the Madoff-related charges, FBI Assistant Director-in-Charge George Venizelos said: “J.P. Morgan failed to carry out its legal obligations while Bernard Madoff built his massive house of cards. Today, J.P. Morgan finds itself criminally charged as a consequence. But it took until after the arrest of Madoff, one of the worst crooks this office has ever seen, for J.P. Morgan to alert authorities to what the world already knew.”

Less than a year and a half later, JPMorgan Chase had another felony charge against it for its role in rigging foreign currency markets, along with other banks. No executive at JPMorgan has gone to jail for any of its crimes.

But in addition to the felony counts, JPMorgan Chase has been on a non-stop spree of abusing its customers and paying fines tallying up to more than $35 billion in just the past four years. Inconveniently for JPMorgan Chase, the trial lawyers who wrote the seminal work on its history of crime, have appended a “Wheel of Misfortune” to their website, listing in excruciating detail the timeline and nature of the abuses and fines and settlements paid. It truly takes one’s breath away that throughout this crime spree, the Board of Directors of this bank has left the same Chairman and CEO, Jamie Dimon, at the helm. One can only surmise from this that Senator Bernie Sanders’ view that the “business model of Wall Street is fraud” is an accurate statement. Why else would Dimon still be at the helm of this bank?

If Forbes doesn’t have to worry about a libel lawsuit, what else might be behind its rapid yanking of the article? As it turns out, Forbes sells, for hefty fees, the ability for corporations to write their own articles and post them as news articles on the Forbes web site. JPMorgan Chase is engaged in such a program with Forbes. Instead of stating that the content is paid advertising, the content carries the nebulous appendage of “BrandVoice.”

Media blogger Phil Fersht had this to say about the Forbes BrandVoice model in 2013:

“To be honest, this whole debacle leaves me depressed and speechless.  While less credible or renowned brands (or some lower tier analysts) might be pressured to take vendor handouts for rose-tinted articles, you expect more from a world famous brand like Forbes.  It’s almost as if the vendors want to cut corners these days and simply buy opinion – and even write it themselves, and some of these media platforms are (apparently) giving up the ghost on quality reporting and journalism.  This is a slippery slope, and one you struggle to see bottoming out anytime soon.”

Forbes even Tweets about the paid content (see below) and has a special Facebook page set up for additional promotion. The Forbes web site carries a quote from an executive of another BrandVoice participant, Ian Dix, Vice President Business Marketing for CenturyLink, who states: “Between the amplification of our content and the Forbes seal of approval, we are extremely excited to be a part of this industry-leading content syndication program.”

For integrated packages, the costs can run to over $1 million. Other content-posting packages can run into the hundreds of thousands of dollars.

As proof that once a magazine heads down this slippery slope there’s no turning back, last February Forbes was called out by Molly Soat of Marketing News Weekly for placing a Fidelity Investments ad on the front cover of its February 2015 print edition with only the notation, “FidelityVoice.” Soat wrote:

“Cover ads have been done before, of course, but this ad caught the marketplace’s attention because it was designed to look like a regular ‘cover line’ (a reference to editorial content inside the magazine) and because the content carried a nebulous label, rather than a clearly defined ‘sponsored content’ tag. According to the American Society of Magazine Editors’ editorial guidelines, rule No. 1 is that no ads should appear on the actual cover of a magazine, although foldouts and false covers have been used as advertising space for years, and some publishers have experimented with running small ads printed on magazines’ covers, themselves.”

Just the month before, in January 2015, Mike Shields of the Wall Street Journal had explored the deal that Forbes had with AT&T, selling it a cover directly inside the main cover of the print edition of the Forbes Magazine. Shields wrote:

“In this case, AT&T is looking to drive readers to its own marketing site, AT&T Business Circle, which provides tips and advice for small business owners. Thus, as part of an elaborate sponsorship, the Jan. 5th issue of Forbes will not only feature the second cover just a page after the editorial cover, but also an ad for AT&T Business Circle just inside the front cover, as well as a full brand-commissioned article that will run within Forbes’ ‘30 Under 30’ feature…This year, AT&T’s BrandVoice cover ad package includes both online and print sponsored content, as well as a similar event sponsorship later in the year; the entire deal’s value is well north of seven figures, said a person familiar with the matter.”

All of this had a depraved but familiar ring to us at Wall Street On Parade. As we wrote last year:

“In the late 1990s, Salomon Smith Barney’s telecom analyst, Jack Grubman, was viewed by his powerful firm as a ‘disruptor.’ He was throwing out the old rules on how a telecom analyst should interact with a company on which he was delivering research to the public and creating a new, innovative model. Instead of following the old rules and remaining pristinely independent and objective, Grubman was sitting in on board meetings at WorldCom, giving investment advice to its executives, while simultaneously issuing laudatory research to induce the investing public to buy the stock.

“When BusinessWeek questioned Grubman on this new analyst model on May 14, 2000, here’s how the disruptor explained his redesign of his job:

‘What used to be a conflict is now a synergy…Someone like me who is banking-intensive would have been looked at disdainfully by the buy side 15 years ago. Now they know that I’m in the flow of what’s going on. That helps me help them think about the industry…Objective? The other word for it is uninformed.’

“Grubman was seen by himself and his firm as a disruptor not because his model made any sense, but because it was bringing in hundreds of millions of dollars in deals for Salomon Smith Barney. Grubman, in turn, got his piece of the action. According to the SEC, between 1999 and 2002, Grubman’s compensation exceeded $67.5 million. Grubman was, in fact, a corruptor not a disruptor. Many of the companies he recommended went bust. The SEC barred him from the industry for life and fined him $15 million for issuing fraudulent research.”

One final question comes to mind. Does one depravity lead to the next in corporate America? Is the whoring of Wall Street the inevitable driver of whoring everything else it touches – from politics, to ratings agencies, to foreign cartel activity and, finally, a “free press”? 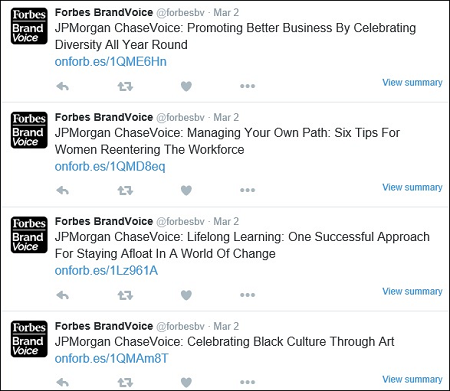