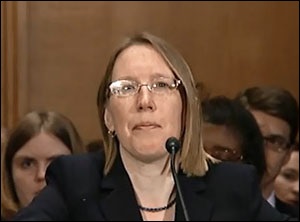 Democrats sitting on the U.S. Senate Banking Committee at Tuesday’s confirmation hearing to take testimony from President Obama’s two nominees for the Securities and Exchange Commission (SEC) must have felt like they were having an out of body experience — listening to the human personification of billionaire Charles Koch’s money aping his Ayn Rand, anti-regulatory double-talk from a witness seat. What had to be particularly nauseating to them was that this nominee was sent to them by President Obama who ran as a Democrat on a platform of hope and change. While the political makeup of the SEC is prescribed by law, so that one of these two nominees had to be a Republican, why pick this particular Republican?

On October 20, 2015, President Obama announced that his nominee to fill a Republican seat on the SEC would be Hester Peirce, a Senior Research Fellow and Director of the Financial Markets Working Group at the Mercatus Center at George Mason University. According to SourceWatch, the Mercatus Center “was founded and is funded by the Koch Family Foundations.”

The Board of the Mercatus Center looks like a Koch brothers’ fan club. Charles Koch, Chairman and CEO of Koch Industries, sits on the Board as does Richard Fink, Executive Vice President of Koch Industries, a sprawling oil, lumber and commodities trading company that is majority owned by Charles and David Koch who each have a net worth currently estimated by Forbes at $42.3 billion.

Also on the Mercatus Board is Brian Hooks, President of the Charles Koch Foundation, and Manuel H. Johnson, a former professor at Koch-funded George Mason University where he held the Koch Chair in International Economics.

Peirce has repeatedly testified before Congress in an effort to neuter the Dodd-Frank financial reform legislation and the Consumer Financial Protection Bureau (CFPB). The CFPB looks out for the little guy in areas such as credit card abuses and student loan rip-offs. It is universally hated by Wall Street predators. In testimony before a House Committee on May 21, 2014, Peirce suggested making the CFPB’s budget subject to the “congressional appropriations process” which would effectively allow its budget to be neutered by Wall Street sycophants in Congress. She also recommended replacing its Director, Richard Cordray (who has apparently shown too much independent thinking) “with a bipartisan commission.”

In 2013, Peirce wrote a paper with Robert Greene attempting to thwart the implementation of the Volcker Rule, the part of Dodd-Frank that was to put an end to Wall Street banks gambling for the house (proprietary trading) with depositor funds and limiting their affiliations with hedge funds and private equity funds. Peirce rolled out the bogus anti-regulatory rhetoric that “restricting bank activities can increase bank fragility by impeding diversification. Less diverse banks may be less stable.” (As if Citigroup’s universal banking model wasn’t completely discredited in 2008 when it failed into the lap of the taxpayer in the biggest bailout in U.S. history and JPMorgan’s universal banking model wasn’t completely discredited when it blew a hole through $6.2 billion of bank deposits in 2012 gambling in exotic derivatives under the radar in London.)

Greenpeace calls Mercatus “a climate denial front group.” Mercatus also has ties to the American Legislative Exchange Council (ALEC) which effectively writes legislation and crams it into law by attaching itself to “maneuverable” politicians. Mercatus previously filed a public comment with the Environmental Protection Agency on climate change, suggesting that global warming would be “beneficial” and sourced its views to ALEC, writing:

“A new book from the American Legislative Exchange Council provides a comprehensive examination of the evidence regarding global warming, and offers several interesting observations. First, it notes that the evidence regarding global warming is mixed, and that, as forecasts of anthropogenic warming get more refined, they predict less extreme warming. The empirical evidence reviewed in this book also offers no scientific basis for dire predictions of rampant tropical diseases etc.  On the contrary, data suggest that any warming that does occur will likely be at night, in the winter and near the poles. If a slight warming does occur, historical evidence suggests it is likely to be beneficial, stimulating plant growth and making humans better off.”

In 2013, Wall Street On Parade wrote an in-depth piece on an earlier Koch front group called Citizens for a Sound Economy (CSE), co-founded in 1984 by David Koch and Richard Fink. We quote from documents showing that CSE was an integral part of the Philip Morris strategy to thwart Federal regulation of cigarettes and second hand smoke and to attack the Food and Drug Administration’s credibility. Why was this important to Koch interests? Because their company’s profits from oil refining, paper and chemicals manufacturing might take a hit from regulations on air pollutants.

A Philip Morris memo from 1994 said that Citizens for a Sound Economy and the Washington Legal Foundation were working “to define the FDA as an agency out of control and one failing to live up to its congressional mandate regarding regulation of drugs and medical devices.” Beginning in December 1994, the memo said, “these groups conducted an aggressive media campaign toward these goals, incorporating the issuance of policy papers, conducting symposia, filing petitions with FDA and taking other steps to keep the public and media focus on the agency.” Citizens for a Sound Economy developed a 15-page strategy plan for gutting the FDA’s funding and keeping it under siege in the media.

In 2010 we broke the story of how another front group, Donors Capital, which has Charles Koch’s fingerprints all over it, bankrolled a $17 million project to place 28 million DVDs of a race-baiting, Islamophobic documentary titled “Obsession: Radical Islam’s War Against the West” in swing voter states just seven weeks before the Presidential election of 2008. The DVDs were inserted into approximately 100 major newspapers and magazines in the U.S., along with a direct mail campaign. At the time, there was a whisper campaign to thwart the election of Barack Obama by suggesting voters would be putting a Muslim in the White House and elevating Islam in the U.S.

Exactly how much more of the Koch brothers’ siege of the levers of a participatory democracy will America tolerate?