Why We Support Bernie Sanders Over Hillary Clinton for President 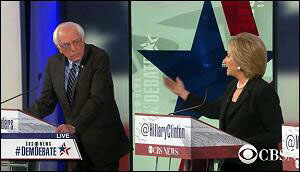 Wall Street On Parade’s strong preference for a President Bernie Sanders over a President Hillary Clinton is based on a well-formed belief that the United States will experience another financial crisis on Wall Street within the next few years. That crisis will, in hindsight, be viewed as the direct failure of President Obama to enact meaningful financial reform legislation after the 2008 crash, when he had the will of the people behind him, rather than pandering to his overlords on Wall Street who financed his campaign.

Nothing more clearly demonstrates who has been calling the shots in the Obama administration than the President’s nominees to oversee Wall Street at the U.S. Justice Department, U.S. Treasury Department, Securities and Exchange Commission, and his outrageous refusal for more than five years to even follow his own Dodd-Frank financial reform law and appoint a Vice Chairman for Supervision at the Federal Reserve.

In the early days of his first term, Obama nominated Eric Holder to serve as U.S. Attorney General at the Justice Department and Lanny Breuer to head its Criminal Division. Both Holder and Breuer came from the law firm, Covington & Burling, which had deep ties to Wall Street. Both Holder and Breuer returned to their high-paying jobs as partners at Covington & Burling after failing to prosecute as much as one Wall Street executive of the mega banks that caused the crash. In a January 22, 2013 Frontline expose at PBS, producer Martin Smith revealed the following:

Martin Smith: We spoke to a couple of sources from within the Criminal Division, and they reported that when it came to Wall Street, there were no investigations going on. There were no subpoenas, no document reviews, no wiretaps.

Lanny Breuer: Well, I don’t know who you spoke with because we have looked hard at the very types of matters that you’re talking about.

Martin Smith: These sources said that at the weekly indictment approval meetings that there was no case ever mentioned that was even close to indicting Wall Street for financial crimes.

Dodd-Frank created the Financial Stability Oversight Council to provide ongoing monitoring of the U.S. financial system and placed the U.S. Treasury Secretary as its Chair. For his nominee for Treasury Secretary, Obama picked Jack Lew, a man who had worked for the serially malfeasant Citigroup in the very division which had collapsed the bank, leading to the greatest taxpayer bailout of a banking institution in the history of finance. (Lew served as Chief Operating Officer of the division that the SEC charged with hiding $39 billion of subprime debt off its balance sheet in Structured Investment Vehicles.) Citigroup received a taxpayer bailout of over $45 billion in equity infusions; over $300 billion in asset guarantees; and more than $2 trillion in secret, cumulative, below-market-rate loans from the Federal Reserve.

Out of the taxpayer bailout funds that went to a clearly insolvent bank, Jack Lew, as a departing gift from Citigroup, received a bonus (yes, a bonus) of $940,000.  Adding to the depravity, during the Senate confirmation hearing for Lew, it was revealed that Citigroup had embedded a criteria in Lew’s employment agreement for him getting that big bonus upon his exit from Citigroup. It would be conditioned upon “your acceptance of a full time high level position with the United States Government or a regulatory body.” In other words, Citigroup needed to add another regulator’s name to its gold-plated Rolodex in Washington.

Lew’s explanation in the Senate confirmation hearing for why he accepted the bonus from a bank being propped up by the taxpayer sounds a lot like Hillary’s explanation for why she took obscene amounts of money from Goldman Sachs for three speeches. Lew stated: “I do believe it was comparable to compensation for people in positions like mine in the industry.” (Yes, insolvent firms like AIG were also handing out obscene bonuses, so in Lew’s warped view, that makes it okay.) When asked by CNN host Anderson Cooper during a Democratic Forum on February 3 why she took $675,000 from Goldman Sachs for three speeches, Hillary Clinton said: “Well I don’t know, that’s what they offered.” (See video below.)

Senator Bernie Sanders was one of only a handful of Senators with the courage to speak out against the Lew nomination and vote against it. In Senate floor remarks, Sanders said this:

“We need a secretary of the Treasury who does not come from Wall Street, but is prepared to stand up to the enormous power of Wall Street. We need a Treasury secretary who will end the current Wall Street business model of operating the largest gambling casino the world has ever seen and demand that Wall Street start investing in the job creating productive economy. Do I believe that Jack Lew is that person? No, I do not…As someone who supports President Obama, I remain extremely concerned that virtually all of his key economic advisers have come from Wall Street.”

Cleaning up the Securities and Exchange Commission, which had allowed all of the corruption to grow unchecked leading up to the crash, should have been Obama’s first order of business. What did he do instead? He nominated a fatally conflicted lawyer, Mary Jo White, who came from one of Wall Street’s go-to law firms, Debevoise & Plimpton, to be SEC Chair. White’s husband, John W. White, works for Cravath, Swaine & Moore LLP, another law firm heavy into Wall Street work. Under Federal rules, the conflicts of the spouse become those of the SEC chair, gutting the SEC Chair’s ability to effectively serve.

Obama has personally caused a significant amount of the Republican backlash by ignoring his own Dodd-Frank law for a solid five years in refusing to nominate a Vice Chair for Supervision to take the reins of overseeing Wall Street at the Federal Reserve. Even when Democrats controlled the Senate through 2014 and his nominee would have likely sailed through confirmation, Obama failed to act. Just this month, on March 15, Senator Richard Shelby, Chair of the Senate Banking Committee, explained why he is holding up Obama’s two nominations to the Federal Reserve Board, stating:

“As I’ve said before, I will not hold a hearing on the two nominations for the Board of Governors until the President fulfills his duty under the law and nominates a Vice Chairman for Supervision. Section 1108 of the Dodd-Frank Act amends the Federal Reserve Act to establish this position – one of two Vice Chairmen which is responsible for overseeing the Fed’s supervisory and regulatory activities.

“I’d remind you this is no small role, given the Fed’s unprecedented authority over our financial system granted in Dodd-Frank. Leaving the position vacant also deprives Congress of an important oversight tool as the Vice Chairman for Supervision is statutorily required to testify before this Committee twice a year. I believe this position should have been filled long ago. It’s now been almost six years since the enactment of Dodd-Frank. The President should obey the law and hold the Federal Reserve accountable for its actions.”

Hillary is effectively promising a third Obama term. We should take her at her word. The campaign war chest she has reaped from Wall Street and its law firms and hedge funds, together with her millions of dollars in speaking fees from Wall Street mega banks, means you can expect more of the same caliber of appointments to the key Wall Street regulatory posts. And when the next Wall Street crisis arrives, you can count on those regulators putting a gun to the head of the American taxpayer to bail out Wall Street while further sacking a beleaguered Main Street.

Americans should not underestimate what’s at stake in this election.