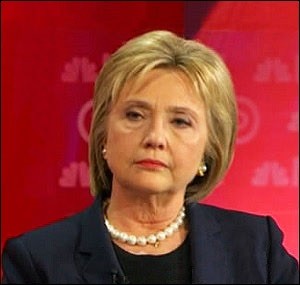 You know there is something bizarre going on in American politics when the New York Times endorses Hillary Clinton for President at the end of January and then begins to question her judgment before a month goes by. What message does it send to voters when a major newspaper sounds like it has endorser’s remorse and we’re still in the primary season?

One month ago, the Old Gray Lady said that Democratic primary voters “have the chance to nominate one of the most broadly and deeply qualified presidential candidates in modern history.” Unfortunately, they weren’t talking about Senator Bernie Sanders of Vermont, who has served with distinction in Congress for 25 years (16 years in the House and the last nine years in the Senate). The Times was speaking about Hillary Clinton, whose actual tenure in Washington feels like it is one endless episode of a bawdy reality TV show based on “The Scandals of Hill and Bill.”

The reader reaction to its endorsement likely stunned the editorial page editors at the Times. Over 5700 comments appeared over the next eight days with many running along the lines of Marian from New York City, who wrote:

“Throughout the decades, The Times has erroneously endorsed the Clintons in spite of their corruption.

“This endorsement not only suffers from the same error, it is also dishonest. In the past, The Times gave full-throated acknowledgment of Clinton corruption, but argued, erroneously, that ‘good policy’ trumps character.”

Marion perfectly captures the anti-establishment outrage across the country. How dare the New York Times shove a candidate at us who has wallowed in Wall Street money from firms charged with felonies while she is under an FBI investigation for transmitting sensitive government communications over a household server.

If good character no longer matters to the New York Times – what does that say about media ethics in America?

Exactly what is it about the Clintons that the Times is so desperate to hold on to? Consider the following corruption caveats it had to include in its endorsement of Bill Clinton for President in 1996 following his scandal-plagued first term:

“Obviously, we could not ask our readers to vote for Mr. Clinton without addressing his most significant leadership problem. Many Americans do not trust him or believe him to be a person of character. We do not dodge that issue nor should Mr. Clinton. Indeed, he must view it as a prime opportunity of his second term. A fraction of the electorate, of course, will never forgive his reputation for philandering. But he can reclaim the trust of the great majority by demonstrating a zeal for financial integrity and for protecting the machinery of justice from politics. Toward that end, we urge Mr. Clinton to close the campaign with a series of dramatic gestures.

“First, he should accept the Republican dare and pledge not to pardon anyone convicted in prosecutions arising from Whitewater, the White House travel office firings, the mishandling of F.B.I. files, or the raising of funds for the 1996 campaign. He should promise that he, the First Lady and every member of the executive branch will cooperate with all investigations, whether they are from the Justice Department, special prosecutors or Congressional committees.

“Next, Mr. Clinton should deal with his party’s Indonesian fund-raising scandal by acknowledging that both parties’ financial practices are wrong even if not illegal. He can then credibly pledge to recapture one of the main themes of his 1992 campaign. We saluted then and we still believe in the stirring call in his inaugural address ‘to reform our politics so that power and privilege no longer shout down the voice of the people.’ ”

How did Bill Clinton answer that call from the New York Times during his second term? He answered it with the Monica Lewinsky scandal, by repealing the critical investor protection legislation known as the Glass-Steagall Act and deregulating derivatives by signing the Commodity Futures Modernization Act. In other words, he laid the groundwork for the 2008 financial collapse. Once out of office, Bill Clinton went on to collect tens of millions of dollars in speaking fees from the same Wall Street firms that benefited from the devastating deregulation of Wall Street.

Last Friday, the same editorial board at the New York Times that had endorsed Hillary Clinton less than a month earlier, compared her to a “mischievous child.” The Times wrote:

“ ‘Everybody does it,’ is an excuse expected from a mischievous child, not a presidential candidate. But that is Hillary Clinton’s latest defense for making closed-door, richly paid speeches to big banks, which many middle-class Americans still blame for their economic pain, and then refusing to release the transcripts.”

The same editorial called out Hillary for complaining earlier in the week: “Why is there one standard for me, and not for everybody else?” The editorial board responded: “The only different standard here is the one Mrs. Clinton set for herself, by personally earning $11 million in 2014 and the first quarter of 2015 for 51 speeches to banks and other groups and industries.”

The Times has thus far received a stunning 2,279 comments to this editorial. Many run along the lines of this comment from Lawrence Imboden of Union, New Jersey:

“Clinton already has a serious trust issue. This only makes matters worse.
I do not trust her at all — that is why I am voting for Bernie Sanders.”

We don’t know for certain that the New York Times has been influenced by the outrage from its readers but we can say for certain that this past Sunday’s print edition and the digital edition provided readers with a multi-media onslaught of reasons to question Hillary Clinton as a “deeply qualified” presidential candidate.

As part of a long article investigating Hillary Clinton’s actions in Libya as Secretary of State, the Times ran a photo with the following caption: “The president was wary about intervening, but Mrs. Clinton was persuasive. In the end, the ouster of Col. Muammar el-Qaddafi left Libya a failed state and a haven for terrorists.” The same caption offers a link to a video titled: Hillary Clinton’s Legacy in Libya. The video presents a devastating indictment of Hillary Clinton’s judgment calls in the Middle East. The article sums up her tenure as Secretary of State as follows:

“As she exited the State Department in February 2013, factional violence, which would break into open civil war in 2014, was on the rise. The flow of refugees paying smugglers for a hazardous trip across the Mediterranean was swelling. And the Libyan chaos would give rise to two rival governments — one backed by Egypt and the United Arab Emirates, the other by Qatar, Turkey and Sudan — providing sanctuary to extremists, soon to be joined by emissaries of the Islamic State.

“The weapons that had made it so hard to stabilize Libya were turning up in Syria, Tunisia, Algeria, Mali, Niger, Chad, Nigeria, Somalia, Sudan, Egypt and Gaza, often in the hands of terrorists, insurgents or criminals.”

When Bill Clinton began his first term as President in 1993, the national debt stood at $4.4 trillion. The country was 217 years old. It had paid for the Revolutionary War, the Civil War, clawed back economically from the 1929 Wall Street crash and Great Depression, paid for World Wars I and II and the Vietnam War. Today, the national debt stands at $19 trillion. It has more than quadrupled in just 23 years. Much of that debt stems from attempting to resuscitate the U.S. economy from the catastrophic 2008 financial crash that resulted from the deregulation of Wall Street under Bill Clinton. Exactly how much of that debt results from ill-advised wars in the Middle East we don’t know because the Department of Defense is a black hole of accounting. But we know it’s in the trillions of dollars.

Curiously, the New York Times video that follows the video of Clinton’s ill-fated adventurism in Libya is a clip of President Obama visiting a batteries plant in Jacksonville, Florida last Friday. In the clip, the President makes a reference to the rhetoric coming from the campaign trail, saying:

“They’re spending all their time talking down America. I don’t know when it became fashionable to do that.”

This is a deceptive ploy from the President – an attempt to silence critics of the status quo on the false narrative that it’s unpatriotic. Hillary Clinton has jumped right in to this ploy, with her new refrain that ‘America never stopped being great.’

Establishment candidates want to avoid the tough questions on how America fell this far this fast because the answers are an indictment of the status quo they hope to perpetuate on behalf of the one percent who pay their way into office and line their pockets when they’re out of office. The answers are also an indictment of the toothless regulators the one percent handpick to oversee their interests in Washington in exchange for campaign financing.

According to the most recent Census Bureau report, 46.7 million Americans live in poverty. As Bernie Sanders is alerting Americans on the campaign trail, “There is something profoundly wrong when the top one-tenth of one percent owns almost as much wealth as the bottom 90 percent. There is something profoundly wrong when 58 percent of all new income since the Wall Street crash has gone to the top one percent.”

As we wrote in 2013, we used to be a country with a rich heart. Now we’re the land of the heartless rich. As billionaires’ wealth grows exponentially and hedge fund owners pay a lower tax rate than plumbers and nurses, the number of homeless children in public schools in the U.S. continues to set records, now at 1.36 million – a doubling of the number since before the recession according to Federal statistics.

Calling out the deplorable inequality in America is not “talking down America.” It’s talking up the critical need for change.

Tomorrow is Super Tuesday, the biggest day of the 2016 primary season where voters will turn out in 12 states and one territory. Let’s see if character still matters in America.