‘Generation Screwed’ Gets a Political Organizing Primer, Just in the Nick of Time 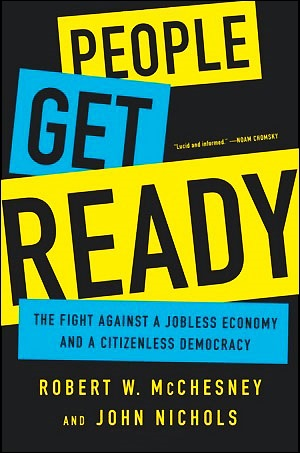 Landing in the midst of the most critical election season since the New Deal era of the 30s, comes a masterpiece of labor history and political strategy from the prolific author, Robert W. McChesney, and John Nichols, the popular national affairs correspondent at The Nation.  Both McChesney and Nichols are co-founders of Free Press, a national media reform organization.

People  Get Ready: The Fight Against a Jobless Economy and a Citizenless Democracy provides the reader with, first, an exquisite understanding of how the U.S. evolved into a society where the citizen has been kicked to the curb in their “democracy” and, next, a strategic road map for a peaceful revolution. The authors write that “The United States retains the façade of democracy. It remains a democracy on paper and in our hearts. But ours is, increasingly, a citizenless democracy…Oligarchs and their servants call the shots for the feudal serfs of corporate capital.”

What this citizenless democracy has fostered is unbridled financial looting, creating the greatest wealth inequality since the 1920s. “In the absence of an engaged citizenry,” write the authors, “economic crimes are committed and the criminals are rewarded.” To underscore that reality, McChesney and Nichols walk us through the financial crimes and bailout rewards to the Wall Street perpetrators during the 2008 crash and its aftermath.

Young workers – the “Generation Screwed” as Newsweek characterized them – are the most hard hit, buried under student debt with few good job options. That will continue as technology automates and eliminates more jobs – unless an engaged citizenry grabs the reins and places technology in service to humanity.

In a section on “labor market polarization,” the authors explain that we now have an economy producing “great jobs for those at the top, a mountain of crappy jobs at the bottom, and fewer and fewer jobs in between.” They quote economist Tyler Cowen to clarify that “ ‘Most of the measured declines in employment participation have been coming from younger men, not early retirees.’ ” One staggering statistic shows that in 2014, 16 percent of men aged 25 to 54 were not working. That figure in the 1960s was 5 percent. And, it’s not because women are taking their jobs. The authors note that “The percentage of women in the workforce peaked in the late 1990s and is now back to levels not seen since the 1980s.”

Despite all the happy talk on job creation from the Obama administration, the authors expose the stark reality of where the country really stands today:

“Economic observers note that the official labor force participation rate has been declining continually, from an annual average of 67.1 percent in 2000 to 62.5 percent in 2015. This translates to the disappearance of close to 7.2 million workers from the official labor force in 2015…However, in this case (as in so many others), the official labor statistics are inadequate. Indeed, if we estimate how many more jobs would be needed to maintain the level of civilian employment that existed in 2000, the picture changes dramatically…the economy would need to generate nearly 14 million more jobs in 2015 if all those workers who have left the labor market since 2000 had remained in it and had jobs. The number, not to mention the trend, of these ‘missing jobs’ is staggering and puts the employment crisis in a very different light from the official pronouncements of the officials who boast about ‘continual job growth.’ ”

The demise of trade unions, of course, has fueled the elimination of livable wage jobs. The authors write that “Union membership has collapsed from roughly a third of American workers in the 1950s and a quarter of American workers in the 1970s to around 11 percent today, and a mere 6.6 percent in the private sector.” Even public sector unions are now being threatened with “anti-labor state governors and legislatures in states such as Wisconsin, Michigan, and Indiana,” eviscerating protections for public-sector workers.

Is there any hope for clawing our way back to a real democracy? The authors are optimistic and so are we.

McChesney and Nichols believe we are in the midst of recognizing what Thomas Jefferson in the Declaration of Independence called “evils” that are no longer “sufferable.” The authors cite nationwide grassroots movements that are rising above the cacophony of corporate-funded astroturf groups: the growing $15 an hour minimum wage movement (Fight for $15), the Retail Workers Bill of Rights, the mushrooming campaign to overturn Citizens United, the Black Lives Matter movement, sustainable farming, manufacturing co-ops, climate justice activists and, now, an unprecedented outpouring of both financial and volunteer response to the candidacy of Bernie Sanders.

The authors describe the early days of the Sanders campaign in poignant detail:

“As the Sanders campaign gained traction in the summer and fall of 2015, massive crowds and rising poll numbers provided tangible evidence of the deep reservoir of support for radical social changes that would reconstruct the economy to suit the needs of the poor and working class. At a point in American history when frustration was high, and when cynicism about the prospects for change threatened to become debilitating, Sanders was getting people out of their houses and back into a political process that was sorely in need of an infusion of people power. In the senator’s hometown of Burlington, Vermont, more than five thousand people showed up to cheer on his announcement of candidacy. Then came ten thousand people in Madison, Wisconsin. Then there were fifteen thousand in Seattle, twenty-seven thousand in Los Angeles, and twenty-eight thousand in Portland. In the first caucus state of Iowa and the first primary state of New Hampshire, the crowds for Sanders were vastly greater than those of any of the other candidates, many of whom had more name recognition, stronger connections to the political establishment in key states, bigger campaign treasuries and massive Super PACs bankrolled by the wealthiest Americans.”

A review copy of People Get Ready arrived at our doorstep yesterday morning. We stopped what we were doing and read it cover to cover. Its official release is March 8. If you are serious about preventing a dystopian future for your country, its citizens, and future generations, you should stop what you’re doing and read this book carefully, cover to cover.

(For more on the roots of the jobless economy, see Bernie Sanders explain it to former Fed Chair Alan Greenspan in the video below.)