Regulators: Banks Are Now Making Riskier Loans, Just Like Before the Crash 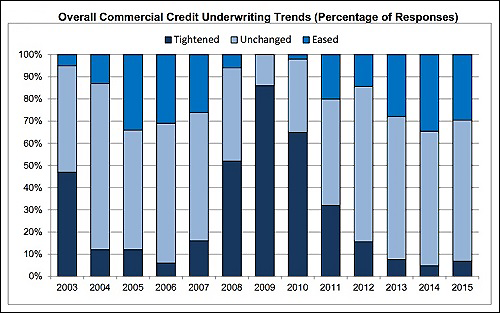 The Office of the Comptroller of the Currency (OCC), which regulates national banks, including the behemoth Wall Street banks that either blew themselves up or became part of shot-gun marriages during the 2008 crash to avoid outright collapse, issued a warning yesterday that credit risks are rising at banks. The rising risks are the result of a loosening of loan underwriting standards, which, says the OCC, “reflects broad trends similar to those experienced from 2005 through 2007, before the most recent financial crisis….”

The first question that comes to mind from this report is what good is increased capital at the mega banks if the banks are simultaneously increasing the riskiness of the loans on their books. The next question is why the regulators have sat back and watched this risk grow over the past tumultuous year without nipping it in the bud. And the final question is what does the Financial Stability Oversight Council (FSOC) – the coalition of all the bank and Wall Street regulators that huddle together regularly in secret – plan to do about this growing threat to financial stability.

It’s not like the 2008 crash occurred to some other generation. We’re the taxpayers that had a gun put to our collective heads to bail out the banks and balloon the national debt to $18.4 trillion to revive an economy that Wall Street blew up just seven years ago. We’re the same taxpayers that found out after the fact that the Federal Reserve had secretly pumped over $16 trillion in cumulative loans to Wall Street, domestic and foreign banks and U.S. corporations in the name of saving the financial system. We’re the citizens that have had to bear the economic brunt of an economy that can’t grow above a two percent rate because of that epic financial crash and its aftermath. And, we’re the same taxpayers that will pay for the next bailout if these same too-big-to-fail banks implode again under the weight of their own hubris and the incompetence of their regulators – an outcome that seems likelier with every passing day.

As it turns out, FSOC is well aware of the growing risks at the banks. Its ingenious plan is to take the same action regulators took going into the 2008 crisis: to “monitor” the imprudent risk-taking rather than stopping it. According to FSOC’s 2015 annual report, it’s well aware of the following:

Given the epic 2008 collapse that resulted from liar loans and other hubris by banks, one would think that FSOC would have issued a strong mandate to banks to rein in imprudent risk-taking. Instead, this was its advice in its 2015 annual report: “The Council recommends that supervisors, regulators, and firm management continue to closely monitor and assess the heightened risks resulting from continued search-for-yield behaviors as well as the risks from potential severe interest rate shocks.”

After the Fed had to deploy $16 trillion in secret revolving loans in the last crash; after the Fed ballooned its balance sheet from $800 billion to $4.4 trillion in quantitative easing programs; after millions of jobs were lost and millions of foreclosures resulted from doing nothing but monitoring the approaching train wreck the last time around, FSOC is giving the same advice now. Janet Yellen, the Chair of the Federal Reserve, is a voting member of FSOC.

Where does the OCC think the rising risks are concentrated? It says it’s “primarily in commercial loan products,” writing as follows in yesterday’s report:

What is motivating banks to assume this increased risk at a time of market convulsions, a potential tightening by the Fed, and a doubling of defaults in junk bonds year over year? According to the OCC report, “Strong competition and ample market liquidity caused banks to reassess their risk tolerance and market strategies to remain competitive.”

And, finally, the OCC slips in this worrisome detail: only 32 percent of the banks in its survey (which includes the largest 19 banks in the U.S.) are considered to have “conservative” underwriting standards.

Given the fact that non-conservative banking practices came close to collapsing the U.S. economy less than a decade ago, why aren’t regulators demanding that all too-big-to-fail banks use conservative underwriting standards.