Troubled Funds Freezing Withdrawals of Your Money: 2007 Versus 2015 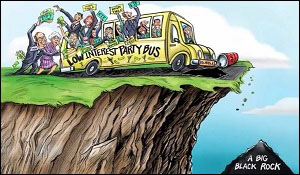 Last week we saw shades of 2007 with both a hedge fund and junk bond mutual fund halting the ability of investors to withdraw funds. An additional credit hedge fund announced it is shutting down. The problem this time around is a dearth of liquidity (read buyers’ strike) for junk bonds. In 2007 the problem was subprime mortgage backed securities and related derivatives.

On June 7, 2007, long before anyone recognized that they were in the first inning of what would become the epic financial crash of 2008, Bear Stearns quietly sent a letter to investors in its High-Grade Structured Credit Strategies Enhanced Leverage Fund, telling them it was suspending the ability of investors to withdrawal their money from the hedge fund because the “investment manager believes the company will not have sufficient liquid assets to pay investors.”

The following month, Bear Stearns wrote to investors in that fund as well as a sister fund, telling them there was “effectively no value left” in the first fund and “very little value left” in the second fund. Both funds had loaded up on bonds and/or derivatives related to the subprime mortgage market.

By August of 2007, there were further growing signs that the subprime market had no bids for its toxic waste. BNP Paribas, the large French bank, announced it was halting the ability of investors to withdraw their money from three of its investment funds because it couldn’t value their holdings. The funds had declined 20 percent in less than two weeks.

By September of 2007, there was a run on a UK bank, Northern Rock, which had subprime mortgage exposure, and by October, Wall Street mega banks Citigroup, JPMorgan Chase and Bank of America were announcing plans to create a “Super SIV” rescue fund to provide market liquidity. That plan eventually fell through. By September of the following year, century-old iconic names were blowing up across Wall Street and the only rescue fund big enough to bail out everybody in line with their hand out was the taxpayer-backstopped U.S. government and Federal Reserve.

Suddenly last week, complacent investors in mutual funds, Exchange Traded Funds (ETFs) and hedge funds invested in junk bonds awakened to the Will Rogers’ wisdom that: “I’m not as concerned about the return on my money as I am the return of my money.” There is now a stampede for the exits – and in some cases, no exit ramp.

The Third Avenue Focused Credit Fund, a mutual fund which is supposed to be able to meet daily redemption requests, announced late last week that it is freezing withdrawals of investor money until it is able to liquidate its $788.5 million in corporate debt and junk bonds (also known as “high yield” bonds). Reuters reports that “Third Avenue’s fund had nearly half its assets in below ‘B’ rated debt, compared to the peer average of just 12 percent, according to Morningstar Inc data.”

In addition, a hedge fund, Stone Lion Capital Partners, said last week that it is suspending withdrawals of investors’ money from its $400 million credit portfolio.

Reuters is also reporting that “LionEye Capital, a $1.5 billion event-driven hedge fund, is closing its doors at the end of December after suffering double digit losses and heavy redemptions this year, two people familiar with the matter said.”

Wall Street On Parade has been warning of junk bond dangers since 2013. (See related articles below.) This fall, Carl Icahn, the hostile takeover maven and hedge fund billionaire, released a video that assigned the “Danger Ahead” in the junk bond market to companies like BlackRock that has packaged illiquid junk bonds into ETFs, listed them on the New York Stock Exchange, where trading is supposed to be available throughout the normal trading day. Unfortunately, according to Icahn, if everyone heads for the exit ramp at the same time, liquidity in those ETFs can quickly dry up. Icahn says that Janet Yellen and the Fed have exacerbated the junk bond problems by keeping interest rates at the zero bound range for so long.

The question on everyone’s mind this week is if the junk bond market could trigger the kind of systemic contagion that unraveled the financial system in 2008. One major concern is just how large the perpetually blindfolded regulators have allowed this market to grow. Moody’s, the ratings agency, puts the high yield bond market at $1.8 trillion today, versus the $994 billion it represented at the end of 2008.

The redemption freezes and drying up of liquidity could not come at a more inopportune time in the markets, which are already on edge over a potential rate hike this week from the Federal Reserve, a continued plunge in crude oil prices (West Texas Intermediate was trading below $35 early this morning), the regular tax-loss selling that comes at year end, and growing evidence of a global economic slowdown.

How long might it take for shareholders to get their hands on their mutual fund investment in the Third Avenue fund? According to a December 9 letter to shareholders by David Barse, then CEO of Third Avenue Management:

Over the weekend, the Wall Street Journal reported that David Barse has himself been sacked from Third Avenue Management and banned from re-entering the building. That step suggests to veteran Wall Street watchers that there may be more shoes to drop in this scenario.

The Next Financial Crisis: Junk Bonds

They’re Shouting from the Rooftops About Junk Bond Dangers – $2.2 Trillion Too Late

Keep Your Eye on Junk Bonds: They’re Starting to Behave Like ‘08