Paranoia is rampant among Republicans on the House Financial Services Committee and was on display throughout its hearing yesterday. Unfortunately for the nation, much of that paranoia is well founded.

Just take a look at the photo above. The panel of witnesses that testified yesterday represent just eight of the ten voting members of the Financial Stability Oversight Council (FSOC; which is pronounced F-Sock), another layer of oversight imposed by the Dodd-Frank financial reform legislation of 2010 to monitor an ever sprawling octopus of a financial system that looks to most Americans as if it is still out of control, seven long years after the greatest financial collapse since the Great Depression.

Behind each of the regulators on the panel (see list and testimony below), with the exception of S. Roy Woodall, the independent member of FSOC with insurance expertise, there is a regulatory agency eating up more and more taxpayers’ dollars while the financial system itself continues to exhibit dangerous and erratic behavior; books continue to be published showing the stock market is rigged and Wall Street is a parasitic wealth transfer operation; commodity prices plummet; junk bond defaults double year over year; derivative exposures remain in the dark; community banks continue to go out of business or are gobbled up; and the holdings of the mega Wall Street banks become ever more concentrated, with just six banks now controlling over 90 percent of derivatives (still housed on the books of their insured, taxpayer-backstopped commercial bank) and 40 percent of deposits. 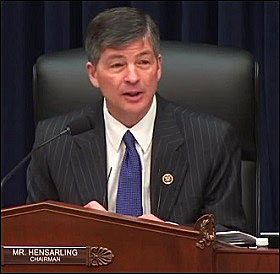 Repeatedly yesterday, Congress members complained that FSOC members ignore their requests for documents or the documents are so redacted they make no sense, as well as condemning the secrecy in which FSOC operates. Committee Chairman Jeb Hensarling opened the hearing with a brief statement of smoldering allegations that included the following statement:

“FSOC has earned bipartisan condemnation for its lack of transparency.  Two-thirds of its proceedings are conducted in private.  Minutes of those meetings are devoid of any useful substantive information on what was discussed.  Even Dennis Kelleher, the CEO of the left-leaning Better Markets, has said ‘FSOC’s proceedings make the Politburo look open by comparison. At the few open meetings they have, they snap their fingers and it’s over, and they are all scripted.  They treat their information as if it were state secrets.’ ”

In fact, their information has been officially determined to be trade secrets – which has the same opacity effect as state secrets — even when there is a critical and compelling right to know by the public. 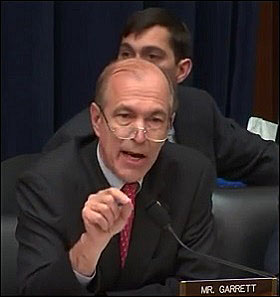 Throughout the hearing, members complained that while it was the mega Wall Street institutions that created the financial crisis in 2008 that has left the country economically crippled, the small community banks are bearing the brunt of the regulatory juggernaut that was created under Dodd-Frank reform. Congressman Steve Stivers from Ohio complained that field agents of the regulators are misinterpreting rules and regulations meant for the largest banks and imposing them on the small community banks and credit unions. Stivers said it’s causing the small financial institutions great harm.

“You all have gotten to know each other pretty well because you meet regularly in closed door sessions, where the public is not allowed, to basically discuss to fundamentally change the U.S. economy. So I thought I’d just take this minute to introduce ourselves to you. We’re the U.S. Congress. We were created by Article One of the U.S. Constitution. We’re the ones who are actually elected representatives of the American public. And we’re the ones who send you all those pesky letters that you all routinely ignore.

“And I know you’re probably confused by this setting: That the public is here; that there’s TV cameras here. So this is probably unusual for you. But this is what we do. We’re open to the American public…So if there is one thing you take away today and that’s the way you run your hearings, and that’s the way you conduct yourselves. You need to become more like us…”

The full hearing video can be viewed below.

Two other voting members of FSOC, Jack Lew, the U.S. Treasury Secretary, and Janet Yellen, Chair of the Federal Reserve Board of Governors, declined to attend the hearing.