Prayer Comes Under Fire in Wake of San Bernardino Shootings 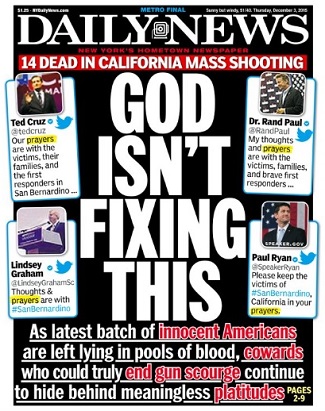 It’s not every day that you wake up to an American newspaper cover like the one shown here from the New York Daily News today. The 96-year old newspaper is expressing its outrage at conservative Republicans who repeatedly invoke God and prayer following mass shootings instead of standing up to the National Rifle Association (NRA) and outlawing assault rifles and high-capacity magazines like the ones used yesterday at a county facility in San Bernardino, California where 14 people were killed and 17 injured.

According to the newspaper, the U.S. is “now populated with more firearms than people” and has experienced “355 mass shootings so far this year” – more than the number of days elapsed.

Today’s editorial at the New York Daily News explains the simmering anger that was expressed earlier yesterday in other publications and across Twitter after conservative Republican candidates offered up the standard platitudes and prayer instead of calling for action on assault rifles. The editorial noted:

“…let’s be blunt, Republicans in Congress — are surrendering. They are saluting the flag of the National Rifle Association.

“In thrall to this flag, lawmakers fail to even permit discussion of a bill to subject suspected terrorists to background checks for firearms purchases.

“In thrall to this flag, they let guns enter the hands of the mentally deranged.

“In thrall to this flag, they resist universal background checks supported by nine out of 10 Americans — and by most gun buyers. And refuse to ban assault rifles. Or limit high-capacity magazines.

Earlier yesterday, George Zornick, Washington Editor at the The Nation, had Tweeted a split screen graphic comparing the responses of the Democratic Presidential candidates to those of the Republican candidates. The Democrats called for action while the Republicans invoked the word “prayer.” (See Zornick graphic below.)

Arthur Delaney, Senior Reporter, and Sam Stein, Senior Politics Editor, at the Huffington Post, penned an article at 4:46 p.m. yesterday echoing the theme that it actually takes legislators to carry out the will of the people. The duo wrote:

“Public officials are the people society trusts to solve society’s ills. Like, say, gun violence. But every time multiple people have been gunned down in a mass shooting, all these officials can seemingly do is rush to offer their useless thoughts and prayers. And so they did after news broke about multiple casualties in San Bernardino, California, on Wednesday.”

We do want to offer a cautionary word, however. Americans who have only lived in urban or suburban areas where police can respond to a 911 call in a matter of minutes need to understand how different it is for people living in rural areas. Typically, there is no local police in rural areas and it can take state or county police 30 minutes to an hour to get to a farmhouse on a long, unlighted dirt road. Owning a gun can mean the difference between protecting your family from an intruder or allowing some deranged stranger to murder, maim or kidnap your helpless family.

Thus, we certainly do not advocate outlawing guns. But having lived in both suburban and rural areas, we don’t believe Americans need assault weapons and high capacity magazines.

As many commenters noted under the various on-line articles that ran yesterday on the San Bernardino shootings, a growing number of Americans are now avoiding shopping malls, theatres, and large public events out of fear that it will be the site of the next gun massacre.

This is no way for a civilized society to live and it is creating economic ripples that the country can ill afford as it attempts to climb out of the greatest economic downturn since the Great Depression. 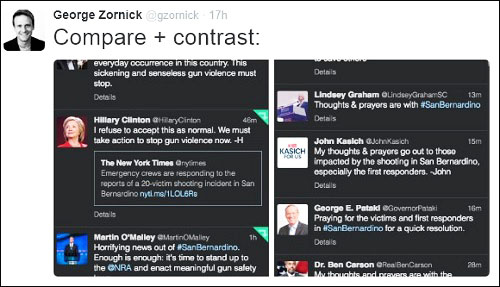