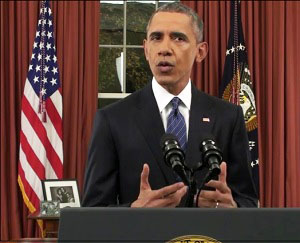 President Obama Addresses the Nation on Terrorism Threat to the U.S., December 6, 2015

Last evening, in his speech to the nation from the Oval Office, President Obama reminded Americans that “Muslim Americans are our friends and our neighbors, our co-workers, our sports heroes — and, yes, they are our men and women in uniform who are willing to die in defense of our country.”  In his concluding remarks, the President told viewers that our nation was “founded upon a belief in human dignity — that no matter who you are, or where you come from, or what you look like, or what religion you practice, you are equal in the eyes of God and equal in the eyes of the law.” (See full video of the speech below.)

What the President didn’t say is that while the recent mass killing in San Bernardino, California was conducted by a married couple who were Muslim, the Muslim community itself has been under relentless assault by homegrown religious extremists since the attacks on the World Trade towers on September 11, 2001.

According to the American Civil Liberties Union (ACLU), mosques in 31 states in America have been the targets of firebombs, arson, acid attacks, gunfire, hate speech or other forms of religious intolerance since 2005. In Joplin, Missouri, a mosque’s sign was torched in 2008. Four years later, its roof was set on fire with the perpetrator caught on a surveillance video. One month later, in August 2012, the mosque was burned to the ground.

In 2008, Chris Rodda, reporting for the Huffington Post, wrote about Muslim babies and children being gassed in an attack on a mosque in Dayton, Ohio during the same week that a DVD of the race-baiting, anti-Muslim documentary Obsession: Radical Islam’s War Against the West was mailed to thousands of households in Ohio and inserted into newspapers around the state. Quoting an email she had received with an eyewitness report, Rodda relayed:

“She told me that the gas was sprayed into the room where the babies and children were being kept while their mothers prayed together their Ramadan prayers. Panicked mothers ran for their babies, crying for their children so they could flee from the gas that was burning their eyes and throats and lungs. She grabbed her youngest in her arms and grabbed the hand of her other daughter, moving with the others to exit the building and the irritating substance there.

“The paramedic said the young one was in shock, and gave her oxygen to help her breathe. The child couldn’t stop sobbing.

“This didn’t happen in some far away place — but right here in Dayton, and to my friends. Many of the Iraqi refugees were praying together at the Mosque Friday evening. People that I know and love.

“I am hurt and angry. I tell her this is not America. She tells me this is not Heaven or Hell — there are good and bad people everywhere.

“She tells me that her daughters slept with her last night, the little one in her arms and sobbing throughout the night. She tells me she is afraid, and will never return to the mosque, and I wonder what kind of country is this where people have to fear attending their place of worship?”

The Obsession DVDs were distributed seven weeks before the Presidential election of 2008 in swing voter states when rumors were being fanned that Barack Obama was a Muslim. Approximately 100 newspapers and magazines in the U.S., including the New York Times, Wall Street Journal, Miami Herald, Philadelphia Inquirer, and St. Petersburg Times, distributed millions of these DVDs. Including the direct mail campaign, 28 million DVDs flooded households in key states.

In 2010, we became curious as to where the massive amount of money came from to finance the production of this race-baiting film and the enormous amount of funds needed to distribute 28 million DVDs. All that was known at that point was that a front group called the Clarion Fund had its name on the production. Where it got its money was a dark secret.

The Clarion Fund had only a virtual office address in New York City with no physical presence and no employees on site. The documents the Clarion Fund had submitted to the IRS to obtain its tax-exempt status showed it had its own obsession with secrecy. One requirement it enforced on its vendors read:

“At all times, whether during or after the provision of services to Clarion, Service Provider shall keep in confidence and shall not disclose or use, for his or another’s benefit, any nonpublic knowledge, data, material, document or other information of any type that is related to Clarion, or its subsidiaries, directors, members, managers, agents, employees or other affiliates or that Service Provider otherwise acquires in the course of providing services (collectively, the ‘Confidential Information.’).”

The Obsession film content was suspiciously slick. The first half shows serial scenes of suicide bombers and human carnage at the hands of Muslims. The second half of the film intersperses clips of Hitler, Hitler Youth, or Hitler analogies with Muslim crowds that include young children with fists in the air calling for death to westerners. While the film concedes that not all Muslims want to kill, it quantifies the number that do (without any substantiation) as 100 to 150 million Muslims, i.e., 10 to 15 percent of 1 billion Muslims.

After much painstaking research, we tracked down the money trail and reported the following:

“The 28 million DVDs were produced at a cost of $15,676,181 by Artist Direct Media which does mass manufacturing of CDs and DVDs with volume discounts. The big media buy for Sunday newspaper insertions ran up the tidy tab of $719,436 and was conducted by NSA Media, a unit of the global ad giant, Interpublic Group, parent of McCann-Erikson. That figure seems decidedly on the light side so there may be other funding sources involved that have not yet surfaced. (NSA Media is a powerful ad buyer, representing some of the biggest print buyers and consumer brands in the country, which might help explain why so few questions were asked by the largest newspapers about this unseemly project.) The full tab, and then some, was paid by the super secretive libertarian nonprofit, Donors Capital Fund. In 2008, Clarion Fund became Donors Capital Fund’s largest grantee by a large margin, receiving $17,778,600. That sum constituted 96 per cent of all funds received by Clarion in 2008 and 9 times its revenue in 2007.”

And who was behind Donors Capital Fund? All roads led to Charles Koch, the right wing billionaire. (Read our full report here.) While we were able to link Donors Capital to the funding of the film, we were not able to pinpoint the names of the individual(s) who gave the money to Donors Capital and earmarked it for producing and distributing the film.

David Horowitz, the anti-Muslim writer at Frontpage Magazine took the Obsession film on a college road show that dovetailed with its distribution through newspapers and direct mail. During the fall of 2007, and continuing into 2008, Horowitz promoted an “Islamo-Fascism Awareness” program to more than 100 college campuses, with the film Obsession made available for viewing. The David Horowitz Freedom Center, a non profit, has received major funding from the same parties that have funded Donors Capital Fund and its sister organization, Donors Trust. Major among those donors is the Lynde and Harry Bradley Foundation.

According to the Southern Poverty Law Center, Muslims make up approximately one percent of the U.S. population and their “voting patterns generally mirror the broader American population. American Muslims are Republicans, Democrats, Libertarians, liberals and conservatives. There is no one political platform or agenda for those who practice the religion of Islam in the United States.”

The majority of Muslims have been living peacefully in America since the 16th century, but some well-financed campaigns by dark money are stereotyping all Muslims as terrorists while Muslims are, themselves, being terrorized at their houses of worship. Presidential candidate, Donald Trump, has now picked up the stereotyping cudgel and appears to be fomenting the hate with a pledge to close some mosques and put American Muslims on a registry if he’s elected President.

On November 23, the Dallas Morning News ran an editorial which carried these prophetic words after an anti-Islam group showed up at a mosque in Irving, Texas with assault rifles (it’s legal to open-carry guns in Texas):

“This is America. Free speech and the right to protest are our calling cards.

“But AR-15s at a place of worship? That is out of bounds, and it shows how very close we are to chaos.”

It takes very little for hate to turn to murder. In February of this year, a white middle-aged male in Chapel Hill, North Carolina shot and killed three Muslim students execution style. Two were set to study to become dentists. According to the New Yorker Magazine, the killer, Craig Hicks, wrote the following on his Facebook page: “I hate Islam just as much as Christianity, but they have the right to worship in this country just as much as any others do.” According to the article, Hicks also wrote that he hoped that Jews, Christians, and Muslims might “exterminate” each other.

The President’s address last night was a deeply inadequate response to the hate fomenting in our nation and the mega amounts of dark money that want to keep it alive through the 2016 Presidential election.